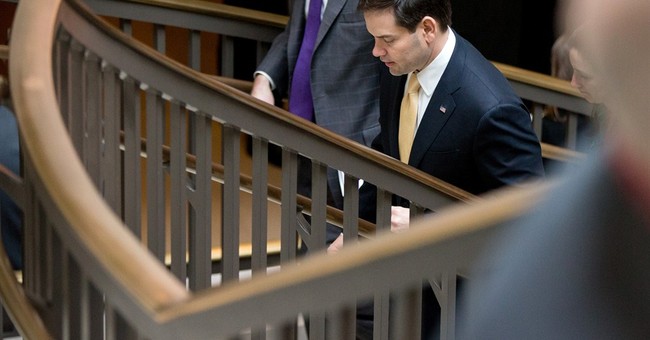 "We must change the decisions we are making by changing the people who are making them," Sen. Marco Rubio, R-Fla., proclaimed in his presidential campaign kickoff Monday. It was impossible not to think of when Barack Obama in 2008 -- a freshman senator with an impressive personal story -- chose to challenge presumptive nominee Hillary Clinton. She had supported President George W. Bush by voting in 2002 to authorize the use of force in Iraq. By 2008, most Democrats opposed that war.

Like Sen. Ted Cruz, R-Texas, who also is a freshman senator and Cuban-American, Rubio tells an upbeat story of his immigrant parents' embracing of the American dream. "He's an optimistic, positive Republican voice," opined Ruben Barrales of the Latino-GOP group Grow Elect. And: "Republicans need to focus on not being perceived as the party of 'no.'"

In that spirit, Rubio tried to compromise when he got to Washington. He became a member of the Gang of Eight -- a rump of four Democrats and four Republicans who collaborated on a big immigration legislative package that included a path to citizenship for many of the 11 million immigrants living in America illegally. The Senate passed an 844-page bill in 2013 -- but it never made it out of the House, and Rubio had stuck his neck out for nothing.

Even before the Senate passed the package with his vote, Rubio had begun to distance himself from it. He felt the heat of tea party conservatives who were angry that the bill offered what they called "amnesty." He began to argue that Washington could not pass a big immigration bill because the public does not trust Washington to enforce it. Congress should first pass enforcement measures. Then it can create a path to legalization. In his announcement speech, Rubio mentioned immigration once, and he said he would work not to reform the system but to "modernize" it.

Hard-core advocates for the undocumented see Rubio's evolution as a betrayal. Others are more forgiving. Barrales has worked to elect Republicans who support a comprehensive immigration bill, yet he is sympathetic with what many would call Rubio's flip-flop on the Gang of Eight bill. "History proved he was right," Barrales told me. Supporters could not get the bill through the House. "He's now trying an approach that he thinks would be more successful."

On the other side of the issue, Rubio may be forgiven, as well. Mark Krikorian of the Center for Immigration Studies, which opposed the big immigration bill, thinks the "immigration debacle was damaging for Rubio, but he could overcome it." After all, Rubio was a rookie in Washington. Besides, enforcement hawks such as Krikorian understand the lay of the land. "I don't trust any of these guys on this issue," he said of the GOP field. "They're all looking for a way to finesse and keep the money people, donors and voters happy."

Rubio has this much going for him: GOP primary voters won't be happy if they pick a nominee who cannot win in November. And they know they need to bump up their share of the Latino vote to get there.