Assisted Suicide -- It's Civil Rights for the Affluent 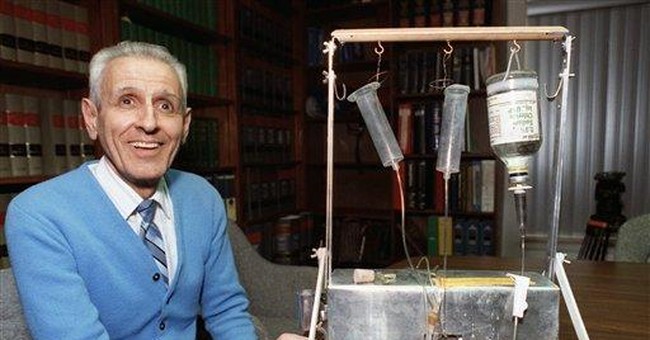 Trending
The assisted-suicide movement is the rare self-proclaimed civil rights movement that exists to cater to the wishes of affluent Americans. On Tuesday, the California Senate Judiciary Committee held a hearing on SB 128, a bill to legalize assisted suicide in the state. (Proponents don't like the word suicide, so they call the measure the "End of Life Option Act.") Supporters talk of their fear of medical personnel's prolonging their lives, of pain and lack of autonomy; opponents fear that the bill's passage would represent a callous act of cultural abandonment of the sick and disabled.

I don't mean to suggest that life is easy for those who have a personal stake in the bill's passage. Christina Symonds, 43, gave heart-rending testimony about her battle with ALS. Because she wants the ability to choose assisted suicide, her family moved to Oregon, which legalized assisted suicide 17 years ago. "I do not want to live my last days in a wheelchair, fully paralyzed, connected to a breathing machine," she said. "To me, that is the picture of horror." That is certainly not the end any young mother would choose.

Clearly, California should have a system that provides Symonds the best care and best pain control possible. Pain control has come a long way since Oregon legalized assisted suicide. But there's this sleight of hand on the part of supporters of assisted suicide. They talk about the need to avoid pain, when their real focus is their fear of losing control. It is an understandable, human fear, but it would be wrong to change the emphasis of medicine on healing to assuage that fear.

Democratic state Sen. Hannah-Beth Jackson, a bill co-sponsor, referred to "the lack of dignity" that can occur toward the end of life. That language implies that sick people who choose to live lack dignity.

Marilyn Golden of the Disability Rights Education & Defense Fund is living proof that someone with disabilities can face unwanted obstacles and thrive. She tried to prompt committee Democrats to think about the many things that can and do go wrong. Doctors misdiagnose. Family members have the ability to make elderly relatives feel unwanted and alone. Lethal prescriptions are cheaper than complicated treatment, so HMOs have an incentive to push patients out the door. Disease can lead to depression, but that can be treated. When people first get a horrific diagnosis, they think they want to die; later many find that their prognosis turned out to be wrong or that they want to live what life they have left.

Golden's group compiled a list of troubling cases from Oregon -- including a woman with dementia, a potentially depressed woman who had breast cancer for 20 years, sick people with financial problems. The Oregon Health Plan would not cover chemotherapy treatment for a patient with lung cancer or a man with prostate cancer but offered to pay for physician-assisted suicide. Jackson dismissed these cases as numerically insignificant. Golden chalks up the low numbers to Oregon's toothless law, which has no mechanism to uncover abuses.

The hearing room was filled with supporters wearing yellow Compassion & Choices T-shirts. Many talked about their determination to end their lives on their own terms. I often am struck by proponents' -- how can I put this? -- affluence, assurance and sense of entitlement. SB 128 is a bill designed to make suicide more available, more palatable and friendlier.

California has world-class medical care. This bill seeks to address a "First World problem," noted Tim Rosales from the opposition. Rosales steered me toward Ken Barnes, a San Diego management consultant who used to be on the executive committee of the California conference of the NAACP. Barnes handily summed up SB 128 supporters: They tend to be white, educated, affluent and able to navigate the health system. Though they think they are "progressive," they are oblivious to the downside for "people of color and people who don't know how to advocate for themselves." They're like white guys who don't understand why black men are leery of police.

The always affable Bob Hertzberg, the Democratic state senator representing the San Fernando Valley, confessed he once blocked a similar bill but said he supports SB 128. Because: "What's the role of government?"

Surely, Hertzberg and the other proponents know that the state cannot stop people from killing themselves. More than 40,000 sad, desperate Americans do it every year. So Hertzberg must see it as a fit role for government to encourage suicide and change the face of medicine by giving doctors a license to prescribe intentionally lethal overdoses. In a world with premium medical care, that is dignity.

Gov. Jerry Brown spent time with Mother Teresa in Kolkata. His office won't say whether he'd sign or veto an assisted-suicide bill. He knows what he should do. True compassion engenders striving to cure illness, relieve pain and offer warmth to those who are suffering. That is dignity.

Those who say they want the option of assisted suicide, said Barnes, essentially are "pointing at a disabled person and saying, 'I don't want to live like that.'" That's not dignity.