Don't Shoot (Your Mouth Off) Before All the Facts Are Known 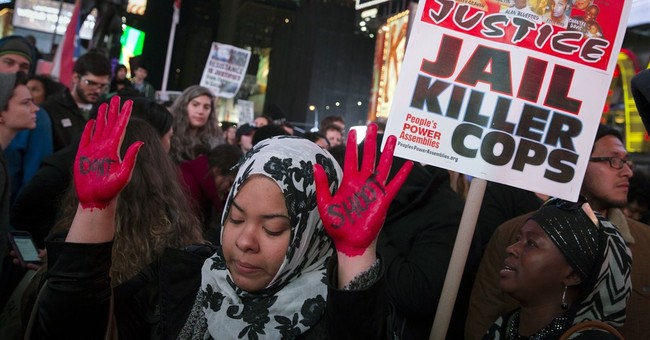 Trending
We hand a man a gun and ask him to protect us. If something goes horribly wrong, perhaps in a flurry of panic, we don't rush to punish him. We make sure a criminal justice system meant to protect all citizens also protects him. We blanket him in the presumption of innocence. It's the reason juries are loath to convict and, as happened in Missouri, grand juries are loath to indict officers involved in shootings.

So do I believe that Ferguson police officer Darren Wilson might not have confronted Michael Brown, 18, and his friend Dorian Johnson, 22, if they had been white kids walking in the middle of the street on a hot Saturday morning? Yes, I do. But I also find Wilson's explanation credible. He testified that he approached the young men because he saw cars swerving around them. It's his job to keep the community safe.

Wilson also testified that Brown prevented him from getting out of the patrol car, that Brown punched him and that Brown tried to take his gun. Physical evidence corroborates some of Wilson's story. Video of Brown shoving a convenience store clerk in what has been described as a strong-arm robbery minutes before the encounter adds credence to Wilson's account. Brown may have been unarmed, but that doesn't mean he wasn't menacing.

It is clear from Wilson's testimony that he was not at home in Ferguson's Canfield Green neighborhood. He called it an "anti-police area." After the shooting, he didn't want to return to his squad car, because he feared residents would identify him. When he called for backup, he asked for "a supervisor and every car you got" -- but not an ambulance. Wilson's next job will not be social worker.

Still, I don't think the national media have given Wilson a fair trial. Early on, pundits jumped to conclusions about the officer's culpability.

I don't know that the shooting was justified, but I do believe there is reasonable doubt about the shooting. There is Wilson's word; there are some conflicting accounts. At this moment, the strongest argument against Wilson is suspicion, not fact. There's this stereotype about white cops and black victims, and there's a cadre of professionals intent on making sure that the stereotype speaks louder than any evidence.

A heavy media presence also allowed hotheads to preen on national TV and fanned the flames of discontent. In August, critics piled on the militarized police presence in Ferguson, which, they charged, contributed to public unrest. Remember the term "war zone"? After Monday night's riots, cable news critics were complaining again about the cops and National Guard -- but this time because there weren't enough of them. Well, which is it?

Soon the camera crews will be gone. Local merchants will take down the boards they had nailed to protect their windows. Small-business owners will debate whether to stay or relocate. Monday night's looters will have to live with what they allowed themselves to become for one night. The people of Ferguson and the police who patrol their intersections will have to look each other in the eye again. Some rioters, too, will have to look at the damage they inflicted.

After St. Louis County Prosecuting Attorney Robert McCulloch announced there would be no charges against Wilson, Brown's stepfather was seen exhorting a crowd to "burn" his city down. Where is the justice in that?

Brian Willingham, a church pastor and black police officer from Flint, Michigan, told The New York Times: "I now realize that we who consider ourselves leaders in the black community can't just be against racism. We have to also be against a portion of black culture that has become increasingly anti-authority and anti-social to a point of self-destruction. This is an enemy we've yet to engage in the black community. But it's a conversation I think we're forced to have now."