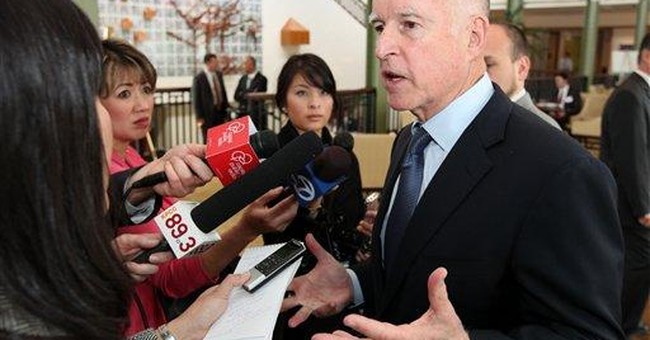 At last month's California gubernatorial debate, Republican hopeful Neel Kashkari praised Gov. Jerry Brown and Attorney General Kamala Harris for using their discretion not to appeal a court ruling that overturned the state's same-sex marriage ban. Kashkari then chided both Democrats for failing to use that same discretion when they appealed the Vergara v. California court decision. The suit is named after Beatriz Vergara, one of nine students who sued to eliminate the state's teacher tenure system.

Superior Court Judge Rolf M. Treu found that the state's tenure and seniority system protects grossly ineffective teachers to an extent that "shocks the conscience." He ruled that the system is unconstitutional. Brown and Harris appealed. Kashkari said: "Nine kids sued, Gov. Brown, and said their civil rights are being violated by a failing school. You sided with the union bosses. You should be ashamed of yourself."

That exchange put Marshall Tuck in a quandary.

A Democrat running for California superintendent of public instruction, Tuck voted for Brown in the primary, even though he agrees with Kashkari on tenure. From 2002 to 2006, Tuck was president of Green Dot charter schools. Then-Los Angeles Mayor Antonio Villaraigosa enlisted Tuck to head the nonprofit Partnership for Los Angeles Schools to improve 17 public schools. In that role, Tuck saw how last-in, first-out policies led to huge teacher layoffs in inner-city schools. These schools, such as Markham Middle School in Watts, hire a disproportionate number of young, new teachers. Tuck supported a successful lawsuit to stop those layoffs. Now he supports the Vergara students. Tenure, Tuck argues, is bad for urban students and bad for good teachers.

The incumbent state schools chief, Tom Torlakson, like Brown and Harris, filed an appeal to the Vergara ruling. At a recent forum, Torlakson dismissed the lawsuit as "blaming the teachers." Torlakson was the beneficiary of a $3 million campaign donation by the California Teachers Association before the June primary. He often frames the state's sorry academic showing as a function of poor funding. The way to improve our schools is to "invest" more, he argued on KQED's "Forum" on Thursday.

I've put off writing on Vergara for a few reasons. I support the concept -- that is, I agree with critics who argue it should not take years and as much as $450,000 to get rid of grossly ineffective teachers. As Tuck argues, it should take longer than two years for public schools to grant tenure. Yet well-intentioned court rulings have been known to produce complicated formulas that undermine local school autonomy and fail to produce the intended effect for children. The bench isn't supposed to write laws -- or negotiate with unions. Sacramento and local officials should reform the system, not a lone judge.

Though a skeptic, I do appreciate that Tuck doesn't think the California Department of Education should use precious resources to defend a retention system that shortchanges students in inner-city districts. It's a system not worthy of defense. "Vergara should never have to happen," Tuck told me. Elected officials should have stepped in and gotten rid of last-in, first-out rules and granting tenure after just two years. Community colleges grant tenure after four years. State universities wait six to 10 years. That's why, Tuck said, "the state should absolutely not be appealing this case."

As for Torlakson, he seems too busy defending public schools to think about fixing them. Torlakson actually has attacked Tuck for working on Wall Street during his first two years out of college. That's the sort of nasty salvo that made it easy for every major newspaper in California to endorse Tuck.

Californians have a choice: Tuck comes across as a nimble problem-solver with a clear-eyed understanding of the terrain; when Torlakson complains about blaming teachers, he sounds like a mediocre teacher.

Over the week, Americans have had an ugly look at the U.S. Secret Service, an institution so beholden to its workforce that its leadership lost sight of its mission. Watch Torlakson defend the tenure system and you feel as if you are watching former Secret Service Director Julia Pierson tell Congress she was serious about whipping her inept bureaucracy into shape.