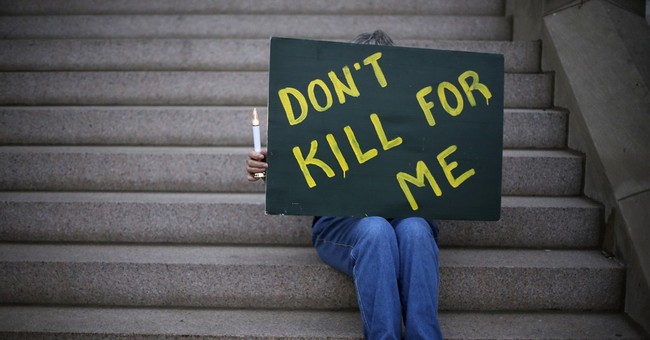 Trending
A -- all bow -- federal judge has ruled that California's death penalty is unconstitutional because the state's "dysfunctional administration" has meted out the punishment to more than 900 murderers but imposed it on "only 13" since 1978. That's too arbitrary, wrote U.S. District Judge Cormac J. Carney of Santa Ana. Besides, "the slight possibility of death, almost a generation after (killer Ernest Dewayne Jones) was first sentenced, violates the Eighth Amendment's prohibition against cruel and unusual punishment."

And: A "death sentence carefully and deliberately imposed by the jury has been quietly transformed into one no rational jury or legislature could ever impose: life in prison, with the remote possibility of death."

It doesn't bother Carney that death row inmates' lawyers have created that preposterous sentence -- remote possibility of death -- by slowing the wheels of justice with dubious time-sucking appeals. If appellate attorneys think delays are too painful for their clients, maybe they should curb their appeals.

It doesn't matter to the judge that Californians have upheld the state's capital punishment law three times since 1972. In 2012, a majority of voters rejected the well-funded, celebrity-endorsed Proposition 34, which would have replaced the death penalty with life without parole. Clearly, voters think it is rational to hang on to a death penalty that is admittedly too slow and obscenely pricey because it makes less sense to allow capital punishment opponents to subvert the rule of law.

It doesn't bother Carney that another federal judge, Jeremy Fogel of San Jose, effectively stopped the death penalty in California when he ruled in 2006 that the state's three-drug lethal injection protocol was unconstitutional.

Nor does it bother the judge that the court did not correct Fogel's outlier ruling in 2008 after the U.S. Supreme Court ruled 7-2 that Kentucky's three-drug death penalty concoction passes constitutional muster.

You may be wondering what Jones did to earn a cell on death row. Though Carney's opinion included no shortage of political arguments, he neglected to document the ugly details of Jones' 1992 crime. He failed to mention Julia Miller -- the mother of Jones' girlfriend -- who was found bound, stripped to the waist and dead from multiple knife wounds. Carney didn't use the word "rape" or "stab." He didn't mention that, as the Los Angeles Times reported, investigators found Jones' semen and DNA at the scene or that Jones admitted to killing Miller on the stand, although he denied planning it.

Carney, however, did find room to reject any notion that endless frivolous appeals cause the delays. The office of California Attorney General Kamala Harris argued that Jones' attorneys have submitted hundreds of pages of legal briefs with a host of complaints. Ergo the delays. The strongest legal argument -- the one that moved Carney to vacate Jones' death sentence -- was the creative claim that the "psychological impact" of legal delays is cruel and unusual.

Kent Scheidegger of the tough-on-crime Criminal Justice Legal Foundation faults a system that nonsensically pays lawyers to undermine the law. A criminal attorney, argued Scheidegger, doesn't go to court to argue that it is unconstitutional to imprison a rapist, but the Habeas Corpus Resource Center sees its job as doing "everything it can do to stop the death penalty."

"For a law to work," Scheidegger added, "people in the trenches have to take it seriously to implement it."

In upholding Kentucky's death penalty, Justice Clarence Thomas wrote, "It is not a little ironic -- and telling -- that lethal injection, hailed just a few years ago as (SET ITAL) the (END ITAL) humane alternative in light of which every other method of execution was deemed an unconstitutional relic of the past," became subject to a constitutional challenge on the grounds that it may induce pain. When that fails, he noted, in "an exercise of raw judicial power," opponents choose the next best option, "never-ending litigation."