Reporter Without a Visa at the Border 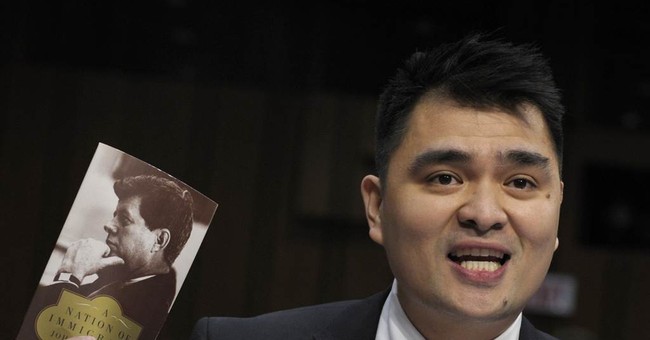 Trending
The star of a CNN film, "Documented," journalist Jose Antonio Vargas went to Texas to bring attention to the 57,000 unaccompanied minors who have crossed the border illegally since October. On Tuesday, authorities detained Vargas at McAllen/Miller International Airport because his Philippine passport lacks a U.S. visa. Within hours, Immigration and Customs Enforcement released him.

Upon release, Vargas issued a statement, in which he noted that he had come to the border to shine a light on the children and the fear they must endure in the course of simple acts such as boarding a plane.

The problem here is: Vargas is living proof that U.S. immigration enforcement is toothless.

I first met Vargas when he was an intern at the San Francisco Chronicle. He reminded me over the phone Wednesday, "I used to deliver your mail." (He lied about his legal status to get the job.)

In 2011, after years of living in fear of exposure, Vargas outed himself as an undocumented immigrant in The New York Times. His Filipina mother had sent him to live in the United States when he was 12.

Think about it. Vargas announced in The New York Times that he is here illegally, and federal authorities left him alone. The only repercussion was that Washington state revoked a driver's license he had obtained fraudulently.

Now, for three years, he's been making appearances across the country. "This is my first time getting stopped at the airport," Vargas told me. (When he decided to go to McAllen, he didn't realize that when he left, he'd have to risk a highway or airport checkpoint.) He has visited 43 states.

A spokeswoman told The New York Times, "ICE is focused on smart, effective immigration enforcement that prioritizes the removal of public safety threats, recent border crossers and egregious immigration law violators, such as those who have been previously removed from the United States."

His driving without a license bothers me to no end. I asked Vargas: If you want to convince citizens you respect the law, why would you do that?

"I was driving because, as a human being, I wanted to be free and I wanted to drive," Vargas answered. And: "An undocumented person driving in the morning in Minneapolis isn't thinking, 'Oh, my God, look what I'm getting away with.'"

I support the DREAM Act, which would grant permanent residence to immigrants brought here illegally as children. Washington should not punish children for the crimes of their parents.

But it leaves me cold when "dreamers" declare in "Documented," "We are undocumented, unafraid, unapologetic."

Unafraid? I don't think so. Vargas has written movingly about the fear that haunted his heady climb in journalism. When his work for The Washington Post led to a shared Pulitzer Prize, he was afraid he'd be exposed.

And unapologetic? Such talk, Vargas told me, used to bother him, too. If I were Vargas, I'd go back to those roots. Unapologetic is the wrong attitude for young people who want to convince others that they respect the rule of law.