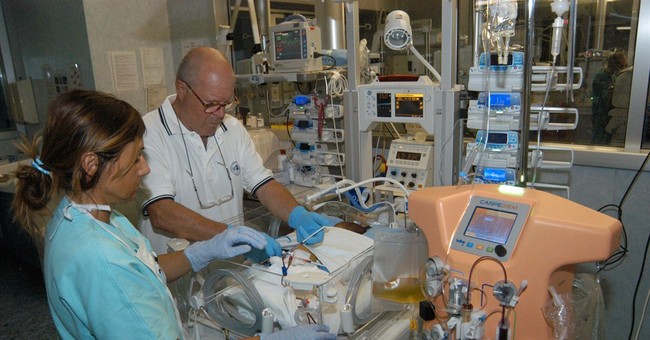 If his story were a movie, then Gus' tale would start before he was born in December 2009. It would begin in a fertility clinic, where actor Jason Patric donated sperm so that his ex-girlfriend Danielle Schreiber could have a baby. Later, his parents would reunite and then split up and then, after a contentious custody battle, find the love they always knew was there, wed and live happily ever after.

But this story begins in Hollywood, so there is no marriage; there are many breakups, separate residences and legions of lawyers -- and there is a cause that other celebrities can get behind.

Patric is fighting a California law that limits parental rights of most sperm donors. After Gus was born, Schreiber and Patric did not live together, although she did visit Patric in New York. Gus called Patric "Dada." When the couple split for good in 2012, Patric sued for joint custody, and Schreiber withheld visits.

If the couple had married, then Patric would have parental rights. (Yes, I know, it's 2014, and many couples have children out of wedlock, but men who complain about their lack of parental rights should know they have a ready remedy: to marry the mother.)

If Gus were the product of sexual intercourse, then Patric could have claimed paternity.

But because Gus is the result of in vitro fertilization, a court ruled Patric could not claim paternity. State law only recognizes as fathers those sperm donors who have a written agreement prior to conception with a single mother.

On May 14, however, state appellate Judge Thomas Willhite overturned the old ruling as inimical to the interests of the child. He gave Patric the chance to legally establish that he is the boy's father. Patric still has to make his case in court, his attorney, Fred Silberberg, told me; the ruling simply means that the actor will have the same opportunity as a non-sperm donor to convince a court that he is a "presumed father" based on his role in the boy's life.

Who doesn't want a chance for a father to fight for his son's best interests?

Well, if Patric is successful, the fallout from this case could bring unexpected litigation to parents of IVF babies who have maintained informal relations with donors. Silberberg sees the Willhite ruling as a victory for sperm donors involved with their offspring. Willhite drily observed, "A mother wishing to retain her sole right to parent her child conceived through assisted reproduction can limit the kind of contact she allows the sperm donor to have with her child to ensure that the relationship does not rise to the level of presumed parent and child."

But as Schreiber's attorney, Patty Glaser, argued, countless single women relied on the sperm donor law to protect their decision to raise a child independently. Schreiber is one -- and now a judge says the law unfairly excludes sperm donors seeking custody. The law also protects same-sex couples with IVF children, as well as sperm donors who want to avoid real parenting and child-support claims. The Willhite decision casts uncertainty over IVF families, and that's hardly a positive.

"Predictability is a significant part of democracy," said Glaser.

Patric has tried to move beyond the sperm donor angle -- a smart move. He has started an organization, Stand Up For Gus, subtitled "The voice of the child." His new cause is to fight "parental alienation or estrangement" -- the practice of one parent's withholding visitation from the other. It's "child abuse," he says.

I have no idea what outcome is in the best interests of Gus. I know that reluctant fathers can turn into doting parents and that some fathers don't have custody for good reason. Judges want to determine what is best for a minor now, not who behaved better five years ago.

The thing is that if Willhite is right that mothers can avoid custody suits simply by keeping sperm donors out of their children's lives, then men can avoid litigation simply by putting terms in writing when they give sperm to their ex-girlfriends.

"The voice of the child" is a great slogan, conceived too late.