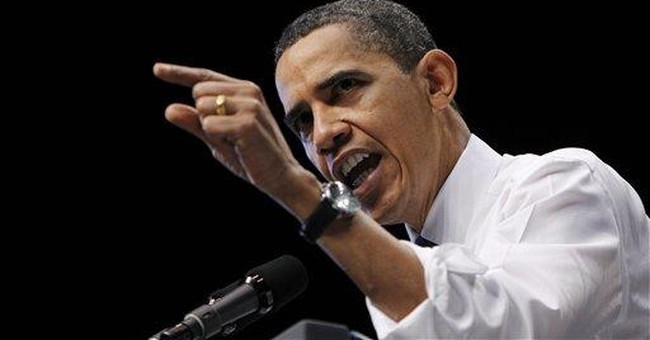 You've really got to hand it to President Obama and House Speaker Nancy Pelosi. Saddled with a majority of both houses and a hold on the White House, they somehow managed to pass the Senate health care bill in the House. It's practically a miracle.

And because Washington loves a victory, Pelosi is now seen as stronger, not as a Democrat who unconscionably lost 34 Dems and every Republican.

Monday, conservative radio talk-show Rush Limbaugh was having a field day playing audio clips of then-Sen. Barack Obama promising that the health care package he envisioned would reduce health care premiums "by up to as much as $2,500" per family per year.

There are a few provisions in the bill Congress ultimately passed that should cut costs. For example, Democrats bravely and correctly chose to yank $120 billion to subsidize Medicare Advantage programs. Because Medicare is running in the red, seniors should pay for their extras.

Other than that, ObamaCare's alleged deficit reduction of $138 billion is pure fiction -- and it is so bald I do not understand why the Democrats even bothered.

Consider the "doc fix." In April, Medicare payments to physicians are supposed to be reduced by 21 percent, as Washington's standard way of cutting spending has been to pass laws calling for spending reductions without cutting services.

In a press conference last week, Pelosi said Congress is committed to passing a "doc fix." But it wasn't in Sunday's bill because the $208 billion tab for the fix would turn ObamaCare's fictional $138 billion in deficit reduction into $59 billion in deficit spending by 2019.

In the Sunday New York Times, Douglas Holtz-Eakin, a former economic adviser to Sen. John McCain, R-Ariz., criticized the inclusion of $70 billion in premiums for a new Community Living Assistance Services and Supports program in the bill to feed the illusion of deficit reduction, when "the benefits it is intended to finance are assumed not to materialize in the first 10 years, so they appear nowhere in the cost of the legislation."

My fear is that as soon as workers see more than $100 withheld from their monthly paychecks for this plan, they will run from that scheme clutching onto their wallets -- while only low-income workers who are subsidized by taxpayers would remain. It could be Adverse Selection Hell.

The largest fiction of all, however, is the contention that ObamaCare will reduce America's health care costs. Some 32 million people eventually will be covered. Families of four earning as much as $88,000 per year will be eligible for health-care tax credits.

The Senate bill established an excise tax on so-called Cadillac health care plans -- the House stalled the starting date for this tax from 2013 to 2018 -- with the argument that only a tax on employer-funded plans can prompt consumers to cut costs. But how? New plans will have to cover the full freight for preventive care, including annual physicals.

And don't tell me that the typical family will save $2,500. You see, you have to be elected to Washington to buy that brand of new math.