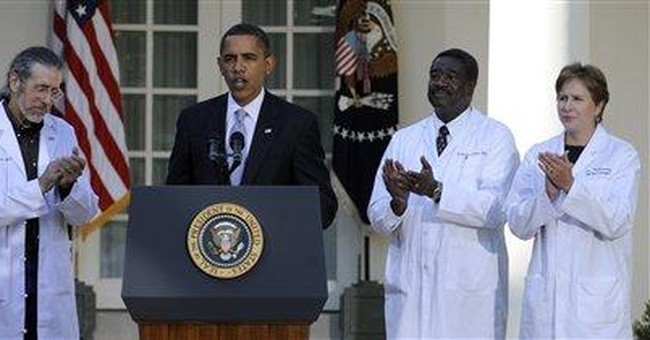 If you want to understand why some conservatives were gleeful over Chicago's fourth-place finish in its bid to host the 2016 Summer Olympic Games -- after President Obama and the first lady flew to Copenhagen to pitch the American city to the International Olympic Committee -- consider this quote in the New York Times from Anita DeFrantz, an IOC member from the United States: "I hate the fact that these elegant people were here, and then our country got treated that way."

These elegant people? So the other folks who didn't win for their cities are what? Slobs? You see in that sentence all the presumption of Obama and his political base. The 2008 presidential campaign reveled in the argument that the cosmopolitan Obama would boost America's image abroad. Alas, the Copenhagen experience suggests that international types may have fuzzy feelings about the United States post-Dubya -- but that doesn't necessarily mean that America will reap tangible benefits. And unlike a beauty contest, the IOC losers can't even bring home a Miss Congeniality prize.

The Drudge Report cribbed this headline after the news that Chicago placed fourth out of four cities in the running: "The Ego Has Landed: World Rejects Obama." Sure, that verdict is hyperbolic, but Drudge hit on the self-conceit that preceded this fiasco.

Before Chicago got voted off the island, senior White House adviser Valerie Jarrett explained the purpose of the Copenhagen trek to ABC News, thus: "So many of them (the IOC members) said they're not just selecting a city. They are selecting people because this is really about relationships."

That quote may explain why both Obamas talked so much about themselves -- Mrs. O used the word "I" some 20 times in her brief, largely autobiographical remarks -- when they were supposed to be selling the Windy City as an Olympics venue.

Only now do they see: The IOC wasn't looking for relationships, but a great location. Besides, there's a certain congruity in Obama's Chicago losing to Rio de Janeiro. As one who has extolled "the burdens of global citizenship," Obama of all people should be thrilled that South America now can stage its first Olympics.

You just know that if George W. Bush had lobbied in person to win the Games for a Texas city and lost, his critics would have been unapologetic in their joy over his failure to deliver. They'd be bashing his intelligence, his motives and probably Texas. Of course, it was easy to kick Bush because so many people did it.

But now that Obama is in the Oval Office, erstwhile Bush bashers want everyone to be a cheerleader. New York Times columnist Paul Krugman, for example, has discovered "the politics of spite" -- and not after looking in the mirror.

After eight years of watching some on the left root for defeat in Iraq and snicker at every international slight against Bush, I must admit it is rather special that the left has discovered patriotism -- to such an extent that there now is a duty to root for Chicago to host the Games.