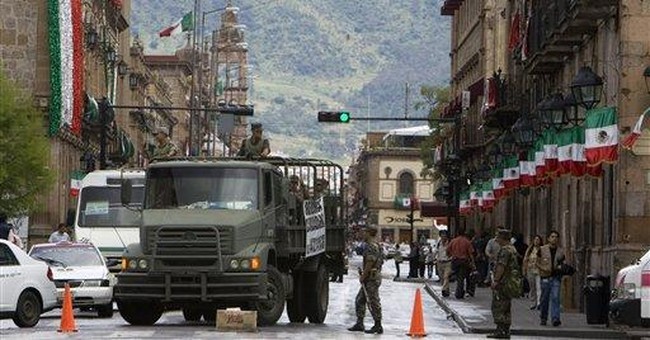 "The war on drugs is a failure," Fernando Henrique Cardoso, Cesar Gaviria and Ernesto Zedillo -- the former presidents of Brazil, Colombia and Mexico -- wrote in the Wall Street Journal last month. "Prohibitionist policies based on eradication, interdiction and criminalization … simply haven't worked," they wrote.

In Mexico, an estimated 6,290 drug-related murders occurred last year. On Feb. 20, Roberto Orduna Cruz had to resign as chief of police of Cuidad Juarez after drug traffickers announced they would kill a police officer for every 48 hours Orduna remained on the job -- and made good on the threat. As Cardoso, Gaviria and Zedillo warned, "The alarming power of the drug cartels is leading to a criminalization of politics and a politicization of crime." Their countries have received billions in U.S. aid for drug interdiction, yet the former presidents suggested "the possibility of decriminalizing the possession of cannabis for personal use."

Now, that baby step is big. They should have used the L-word, legalize, as decriminalizing drugs would leave trafficking and big profits under the control of violent cartels. But as Eric Sterling, president of The Criminal Justice Policy Foundation, figures, "decriminalization is often used as a euphemism for legalization," in part because voters perceive legalization as complete lawlessness, when it should entail regulation "by a state by state basis and a drug by drug basis."

Which is why Norm Stamper, the former Seattle police chief, now speaks for Law Enforcement Against Prohibition. He grew up in San Diego and has spent a lot of time in Mexico. "I love the country and it's heartbreaking to see what's happening, when we know there's a solution for it," Stamper told me. "There's a simple but profound stroke that can drive the cartels and the street traffickers out of business -- end the prohibition model and replace it with a regulatory model."

On March 7, The Economist resumed its call for an end to the war on drugs: "Prohibition has failed; legalisation is the best solution." Noting that more than 800 Mexican police and soldiers were killed since December 2006, the editorial noted, "Indeed, far from reducing crime, prohibition has fostered gangsterism on a scale that the world has never seen before."

Thursday, CNN anchor Rob Marciano read parts of The Economist piece to Rep. Loretta Sanchez, D-Calif., then asked her about legalizing drugs. Sanchez responded (please bear with this quote, it's a bit garbled), "Certainly there is one drug -- it's called alcohol -- that we prohibited in the United States and had such a problem with as far as underground economy and cartels of that sort that we ended up actually regulating it and taxing it. And so, there has always been this thought that maybe if we do that with drugs, it would lower the profits in it and make some of this go away."

Ess Eff Assemblyman Tom Ammiano has introduced a bill to legalize and tax and regulate "the state's largest cash crop" -- which would help with Sacramento's chronic budget shortfalls. I think it's fair to assume that if the bill passed, California would see an increase in marijuana use -- which is not good -- but a decrease in drug profits and violence -- which is good.

At a House subcommittee hearing last week, Rep. John Tierney, D-Ma., figured that $15 to $25 billion in annual profits from drug sales in the United States bankroll Mexican cartels' purchases of guns from America. "The profits and guns -- and drug precursors in some cases -- then find their way back across the border to Mexico and fuel the increasing violence."

Sidney Weintraub of the Center for Strategic and International Studies told the Chronicle that 40 percent of Mexico's drug sales are marijuana. "What we have to do is change our policy and decriminalize marijuana."

Think the L-word, instead, to put more kingpins out of business. Except that to question the drug war is to risk losing tax money. When the El Paso City Council passed a resolution calling for "open, honest, national dialogue on ending the prohibition of narcotics," state and national politicians threatened to withhold government funds. The Associated Press reported on a letter by five Democratic state representatives that warned that the resolution "does not bring the right attention to El Paso. It says, 'We give up and we don't care.'" The El Paso mayor vetoed the measure and it died.

I'd say that to not ask if prohibition actually works is to give up and not care. Now here's a moral question: How many Mexican police have to die because American parents believe that U.S. drug laws will keep their teenagers from doing something their kids may or may not do whether it is or isn't legal?

That Loudmouth Troublemaker Is An FBI Snitch
Townhall
'Limousine liberal' Sen. Sheldon Whitehouse defends his membership in an all-white beach club
Twitchy
Bill Maher Torches California for Its Heavy Regulation
Redstate
Is Pennsylvania on the Verge of a Forensic Election Audit?
PJ Media