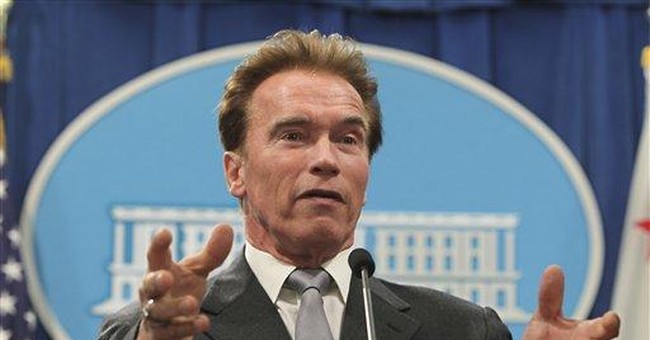 Former eBay chief Meg Whitman is preparing to run for governor in 2010. Considering that California is so broke that next month it may have to issue IOUs instead of checks, I cannot imagine why anyone would want the job. And considering that Gov. Arnold Schwarzenegger started out as a political outsider who promised to parachute into Sacramento to clean up the mess -- only to allow it to grow messier -- I wonder if voters will be anxious to pick another parachute-in Republican for governor.

Not that the alternatives are all that appetizing. If Whitman may seem too new, some Democrats expected to jump into the race have been running for governor longer than many readers have been voting in California. Attorney General Jerry Brown ran and won the governorship in 1974 and 1978. Lt. Gov. John Garamendi, who has already announced his candidacy, ran and lost in 1982 and 1994. He announced he would run in the recall race, then didn't, but then ran for lieutenant governor, or governor in waiting, in 2006.

I wonder if Democrats are anxious to nominate Your Father's Oldsmobile when there are newer models -- Los Angeles Mayor Antonio Villaraigosa or EssEff Mayor Gavin Newsom -- that have been road-tested, without having rusted in the driveway.

"We all hope that Gavin Newsom wins the nomination so the Republicans get a chance," GOP analyst Allan Hoffenblum noted.

So far, it looks as if Whitman will compete for the GOP nomination with Insurance Commissioner Steve Poizner and former U.S. Rep. Tom Campbell. It is a sign of a more moderate GOP that all three support abortion rights.

"It would be nice if one of them would look at running against Sen. Barbara Boxer," Hoffenblum noted. Because Campbell has run for the Senate twice and lost, it would make more sense if Whitman or Poizner (and their personal fortunes) ran for the Senate rather than compete for the governor's seat.

Like Whitman, Poizner is a Silicon Valley exec whose fortune topped the $1 billion mark before he acknowledged an itch for politics. Unlike Whitman, Poizner did not jump into politics by running for the top spot. In 2004, he ran for the Assembly and lost. In 2006, he ran for insurance commissioner and won, and he has done an impressive job in that office, as well as wooing the grassroots supporters.

If the race were decided by expertise on the state budget, Campbell, who served as Schwarzenegger's finance director from 2004 to 2005, would win hands down. It's hard to imagine Campbell raising the money to compete with two gazillionaires, but to know him is to wish him luck in finding a way.

Whitman's strength, Hoffenblum noted, "is that she is a woman," part of a voter group the GOP has trouble winning. Better yet, she's a billionaire woman, who guided a Silicon Valley startup to become a global giant.

Whitman is said to be a quick study. Her liabilities start with her failure to vote in the 2002, 2004 and 2006 primaries, as well as the 2003 recall election and 2005 special election. Whitman isn't talking to the media yet, but her spokesman, political strategist Mitch Zak, noted, "It's something she regrets, and again it was in a time when she was focused on eBay and raising a family."

The problem is, while Whitman, who became a Republican in September, was too busy to vote, she was not too busy to write checks to Democratic causes -- something Poizner did as well when he wrote a $10,000 check to the Gore Recount Committee. Zak explained that, as a high-tech exec, of course Whitman donated to tech-friendly politicians. Poizner wrote the $10,000 check for his wife, an aide explained.

Are these lethal issues? No. But they make one wonder if Whitman is another big-bucks big-ego, who recently discovered politics and now wants to run the show. I don't know the answer, but Whitman will have to persuade voters she is not. (By the way, I briefly met Whitman on a plane flying back from the Republican National Convention in Minneapolis. She was flying coach.)

When I asked Zak why Whitman wasn't running for a seat not already being sought by a viable Republican, he replied, "The Senate race has never been a consideration. If Meg Whitman runs, it's going to be for governor and no other office. She's a CEO. She's a leader."

Would she consider raising taxes? "No," Zak answered, "she does not believe government should be in the business of raising taxes."

Great -- not. Once again, you see a Republican candidate promising the impossible -- that Californians can send the most liberal big-spending Democrats to Sacramento year after year and there will be no consequences in the form of higher taxes. That's why the budget is in this mess.

With that message, Whitman might as well run for head Spartan in the battle against the Persians at Thermopylae. It'd be a short gig, but she can be CEO.