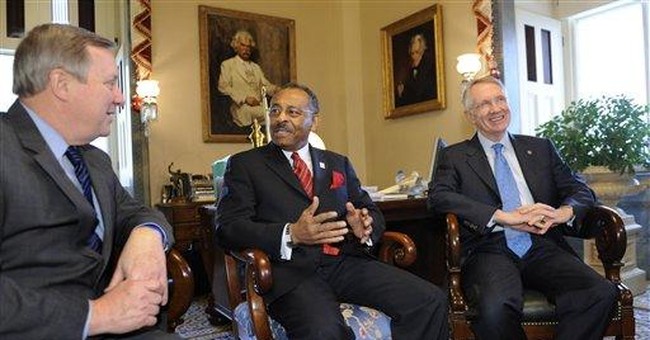 Senate Majority Leader Harry Reid has an identity problem. In blocking the lawful and legitimate appointment of Roland Burris -- admittedly tarnished by its maker, Illinois Gov. Rod Blagojevich -- the Nevada Democrat apparently thought that he was the king of Illinois, with the veto power over whom Illinois could send to the Senate.

Yes, this is the new ethics-enriched Congress under Democratic leadership. Be it noted, this whole Burris mess could have been avoided if the Democratic-led Illinois Legislature had called a special election when president-elect Barack Obama's seat was vacated. But Illinois solons were not willing to risk losing to a Republican win in a fair election. Thus, they handed Blagojevich an opening to wreak mischief by naming Burris, a former Illinois attorney general of good reputation.

Then Reid added to the damage. Burris has not been implicated in the Blagojevich corruption probe, yet King Harry impugned Burris -- then refused to seat him based on dubious Senate rules. Reid was acting as if the Senate is a club in which happily ensconced long-time members can refuse to admit entering riffraff. But it doesn't work that way.

Everyone in Washington has known Reid would have to give in and allow Burris to be seated. In meeting with Burris on Wednesday, Reid initiated the first steps in the Washington dance of folding while pretending not to fold in inglorious defeat.

Reid looks better for not having seated Democrat Al Franken as the Minnesota senator while Republican Norm Coleman contests the election results. Note I have refrained from using titles. Coleman, the incumbent until recently, is no longer the senator from Minnesota. Franken's 225-vote lead (out of 2.9 million votes cast) was certified by the state Canvassing Board, but the board did not declare a winner. The tally is not final as Coleman is pursuing an "election contest" to prompt the counting of 654 rejected ballots.

Some Democrats want Reid to seat Franken "provisionally." Some Republicans want GOP Gov. Tim Pawlenty to name Coleman to retain the seat until the election is final. This week, Reid told Roll Call, the newspaper of Capitol Hill, that he will not seat Franken for the near future, pending final resolution. Reid's patience -- like that of Minnesota voters -- may give out.

I think Reid should pursue both proposals: Let him provisionally seat both Coleman and Franken -- make them share an office until the election is settled. It worked for the twin daughters in "The Parent Trap."

True, Franken and Coleman are not identical twins separated at birth. But just maybe if they are shut together in tight quarters, then they could learn to make nice. They need to, because some day, after a full and transparent counting of the votes, there will be a certified winner in a contest so close that it may be decided by .01 percent of the vote. Let's hope in the end the final count will not produce one winner and one sore loser.