The Unexpected Campaign Season That Was 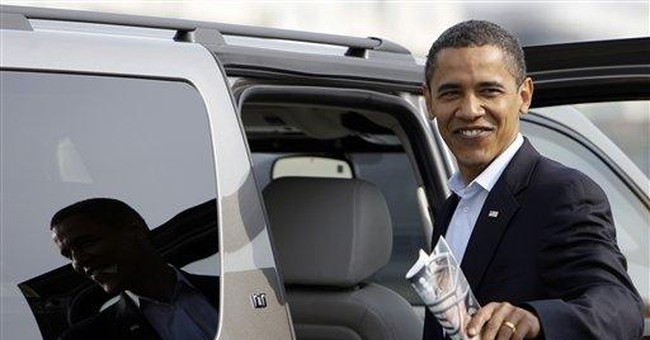 The biggest loser in this 2008 election is obvious even before the first vote has been counted: conventional wisdom. Remember last year when Hillary Rodham Clinton was considered the shoo-in for the Democratic Party's presidential nomination, after which she was supposed to waltz into the Oval Office? Also in 2007, Beltway pundits had written off John McCain's chances of winning the GOP primary because McCain had angered his party's base by pushing an immigration bill that extended the path to citizenship to illegal immigrants. The knowitalli had crowned former Massachusetts Gov. Mitt Romney the sure thing -- or, in fey moments, erstwhile New York Mayor Rudy Giuliani. They wrote off McCain as a "dead man walking."

The great thing about covering politics is that you continually learn new things about the American people. And no matter what pundits -- yes, including me -- write in newspapers or assert on cable TV, the voters in the end have their say.

It's better that way. When I attended this campaign season's first debate in February 2007 -- actually, it wasn't really a debate, but a labor-sponsored rollout for Democratic hopefuls in Carson City, Nev. -- I wondered if voters would be so overexposed by November 2008 that they would be up to here with both party's candidates, whomever they were. I mused as to whether "Barack Obama, D-swim trunks," had made a wise or foolish decision to skip the event.

Turns out, he knew what he was doing. Back then, who knew that before the primary was over, Clinton supporters would be complaining that the media were giving them second-class treatment? Or that Republicans would begin to feel grudging respect for the former first lady in one of those political the-enemy-of-my-enemy turnabouts?

Who knew that the vaunted Clinton machine would be so flat-footed and unable to turn on a dime? Who knew that campaign critics would be panning the McCain campaign for being too nimble? Who knew that, after many in the Obamaphile media declared Clinton dead, she would win Indiana, Pennsylvania, West Virginia, Ohio and Texas?

Who knew that Obama would go back on his pledge to campaign within the public financing system in the general election -- and raise more than $600 million to fuel his candidacy -- and that this flip-flop would barely rate notice?

Who knew that Obama's poll numbers would drop after he delivered a speech to 200,000 ecstatic Germans? Who knew that when only one reporter, according to the New Hampshire Union Leader, met McCain at the Manchester, N.H., airport during Obama's world tour, that McCain's star would rise in the polls after the conventions?

Who knew that some reporters would look more carefully into the finances of Joe the Plumber than running mate Joe (the Senator) Biden?

Ditto Sarah Palin's wardrobe. Who knew that McCain would spend the general election proposing one tax cut after another -- a summer gasoline-tax holiday, a corporate tax reduction and cutting the capital-gains tax in half?

Who knew that Saddleback Church preacher Rick Warren would ask the best questions at a candidate forum? Who knew that Katie Couric could give a killer interview? Who knew that McCain would be the nominee to choose a woman as his running mate and Obama would pick an old white guy? Who knew that when Biden said at a San Francisco fundraiser, "Mark my words. It will not be six months before the world tests Barack Obama like they did John Kennedy" that anyone actually would mark Biden's words?

Who knew that the 3 a.m. phone call that Clinton warned about in her commercial would end with an economic bailout bill that cost more than $800 billion?

Who knew that both George W. Bush and Dick Cheney would spend most of 2008 in an undisclosed location? Who knew that before the election, Team Obama would kick reporters working for newspapers that endorsed McCain off Air Obama? Lese-majeste is back.

Who knew that the GOP running mate would be hanged in effigy and her look would become the year's favorite Halloween costume?

Well, actually that sort of thing happens every four years.