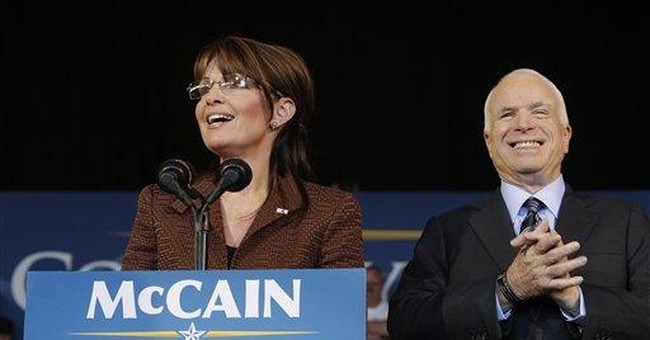 ST. PAUL -- The 2008 Republican National Convention had too much in common with the 2004 Democratic National Convention in Boston. That's where presidential candidate John Kerry talked endlessly about his military service -- to the point where people would joke, "Hey, did you know that John Kerry served in Vietnam?" Nor did Teresa Heinz Kerry -- the Massachusetts senator's heiress second wife -- set delegates on fire. By that convention's end, the crowd clearly lacked gusto for their nominee and the campaign ahead.

Last week in St. Paul, the Republican convention dwelled too long on McCain's POW status -- and, yes, he is a true hero -- and McCain's wife didn't seem to connect with the delegates. There was less hoopla after McCain's speech than after that of his running mate, Sarah Palin.

Like Kerry, John McCain seemed stuck in the past. He didn't talk about America's future as much as he should have. His campaign team made the convention too personal -- too much about McCain, too little about his vision on how he would govern.

The best political speeches start at Point A and end up at Point C, D or even E. There is an argument, a purpose, an attempt to persuade.

In his speech, McCain, like too many politicians, served up a jumble of letters, embellished with cutesy sentences that served as shorthand for the larger arguments he failed to articulate:

"All you ever asked of government is to stand on your side, not in your way," for small government.

"We're all God's children, and we're all Americans," for the immigration debate.

"We are going to stop sending $700 billion a year to countries that don't like us very much," as a stand-in for a foreign policy discussion.

This does not serve him well. There are voters out there who wonder: If McCain is elected, will his emphasis be on economics or social issues? What are the things he thinks government should do, and what can it not do? What, if anything, does McCain have to offer to Libertarian-leaning Republicans?

McCain has advocated cutting corporate taxes to create jobs. But he doesn't make the case. He uses one statistic -- that America's business tax rate is the second highest in the world -- and leaves it at that.

McCain surrogates frequently dismissed Barack Obama, saying America doesn't need dramatic speeches. Maybe America doesn't need them, but McCain does. He ought to think of the next eight weeks as a first date. It's not enough to throw out a series of pickup lines. You have to throw in a little romance. And you don't spend dinner talking about yourself.