Free the Oil -- and Other Slick Tricks 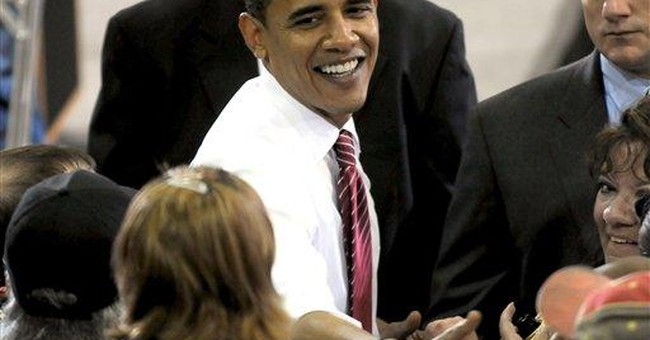 Earlier in the presidential campaign, when John McCain and Hillary Rodham Clinton called for a summer holiday on the 18.4-cent-per-gallon federal gasoline tax, Barack Obama dismissed the tax vacation as an election-year gimmick that offered financially squeezed families "just pennies." I wrote that, unlike Clinton and McCain, Obama "stood tall in opposing the gas-tax holiday."

Now we know why. Obama must have seen the gas-tax holiday as chump change in the wondrous store of campaign gimmicks. When Obama panders, he panders big-time. Witness his proposed "emergency energy rebate" that -- on the heels of this year's $600 per taxpayer stimulus package rebate sent to taxpayers this year -- promises additional $500 checks for American workers or $1,000 per family "as soon as this fall." (Is there an income cap for how Obama defines eligible "working families"? The campaign did not get back to me on that by my deadline.)

To hear Obama, the check is practically in the mail. Obama argues that his plan is fiscally responsible because he would pay for it by levying a "reasonable" tax on oil companies' windfall profits. The candidate has pointed to Exxon Mobil's record profits -- $22.6 billion in the first half of this year -- to justify his raid on its earnings.

Less reported, Investors Business Daily editorialized, are the record taxes Exxon Mobil paid in the same period -- $61.7 billion. Also, "Exxon made a dime on a dollar in 2007. The oil and gas industry as a whole made 8.3 percent, compared with 8.9 percent of all U.S. manufacturing." So why whack Big Oil?

According to Stanford economist John Taylor, who is a McCain adviser, raising taxes on oil companies likely "will raise the price of gasoline."

If critics are right, and a windfall profits tax raises gas prices or leads to a drop in domestic oil output, which only worsens America's chronic dependence on foreign oil, then what? Another emergency energy rebate check?

McCainiacs respond by noting that Obama voted for the 2005 omnibus energy bill -- signed by President Bush -- which gave oil companies specific tax breaks. For that very reason, McCain voted no.

Many in the press have faulted Camp McCain for being too cute in taking on Obama's energy plans. Hence the stories about McCain aides handing out tire gauges labeled "Obama Energy Plan" in response to Obama's stump statement, "We could save all the oil that they're talking about getting off drilling, if everybody was just inflating their tires."

I'll take the tire gauges over Obama's $1,000 pander. Ditto Obama's huge flip-flop on the 70 million barrel Strategic Petroleum Reserve. In July, when other Democrats were clamoring for a release of the oil, Obama had the fortitude to argue that the reserve should be saved for "a genuine emergency," like a terrorist attack. Now he says he wants to free the oil.

Slick. Mayhap, instead of tire gauges, McCain's Navy should be handing out $500 bills in Monopoly money. Or a pair of earrings.

Last month, Michelle Obama said of the $600 stimulus rebate checks: "You're getting $600 -- what can you do with that? Not to be ungrateful or anything, but maybe it pays down a bill, but it doesn't pay down every bill every month. The short-term quick fix kinda stuff sounds good, and it may even feel good that first month when you get that check, and then you go out and you buy a pair of earrings."

Now, I've never spent $600 for a pair of earrings. But in the event of an emergency -- which requires the releasing of petroleum and mailing $1,000 checks to working families -- I could learn to sacrifice.

Who Killed Ashli Babbitt
Townhall
GRRL BYE: Joy Reid getting all big and bad with Kyrsten Sinema for not being 'progressive enough' (and wearing f**k off ring) goes SO wrong
Twitchy
Ron DeSantis Meets With Trump, Here's What I Think It Means
Redstate
The Morning Briefing: The United States Should Soon Reach Fauci Immunity
PJ Media