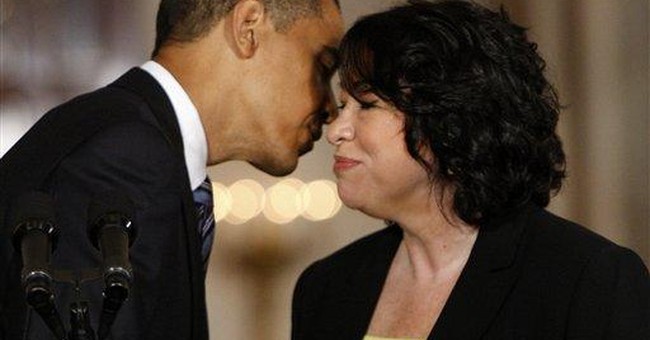 President Obama wants Second Circuit Judge Sonia Sotomayor to fill Justice David Souter’s seat on the Supreme Court. But her nomination paints a grim picture of the Supreme Court’s future for those who believe the law should be interpreted according to its original meaning.

Obama says that an important quality in a nominee is the recognition of the limits of the judicial role. Thus judges should “interpret, not make law” and approach decisions with a “commitment to impartial justice.” With these words, it’s curious he’d select a nominee who disagrees.

Judge Sotomayor has made several public statements denouncing -- and even lightly mocking -- the idea that courts should be impartial and shouldn’t engage in policymaking. During a Duke University panel discussion in 2005, Sotomayor stated: “All of the legal defense funds out there, they’re looking for people with Court of Appeals experience. Because it is -- Court of Appeals is where policy is made.”

She flippantly brushed off this statement, to laughter from the audience. “And I know, and I know, that this is on tape, and I should never say that. Because we don't 'make law,' I know. Okay, I know. I know. I'm not promoting it, and I'm not advocating it. I'm, you know…” She did not go on to clarify what she apparently did mean, but the words speak for themselves.

This is not the first time she has publicly expressed bold views on a judge’s role. In a 2001speech at Berkeley School of Law she advanced the idea legal interpretations are inevitably and unavoidably influenced by one’s own experience and cultural background, and that “impartiality” is just an “aspiration.” She ponders: “I wonder whether achieving that goal [of impartiality] is possible in all or even in most cases.” So much for blind justice.

In the same speech, she was even so bold as to assert her “hope” that “a wise Latina woman with the richness of her experiences would more often than not reach a better conclusion than a white male who hasn't lived that life." As Stuart Taylor has aptly noted, “Any prominent white male would be instantly and properly banished from polite society as a racist and a sexist for making an analogous claim of ethnic and gender superiority or inferiority.” During her hearings, senators should demand an explanation for her radical statements of ethnic superiority.

In addition to making statements about the importance of life experience, Obama has also repeatedly stated that “empathy” is a vital quality that he seeks in judicial nominees. Sotomayor’s time on the Second Circuit has given her ample opportunity to demonstrate the role that “empathy” plays in her decision-making.

Most notable is the case of Ricci v. DeStefano, in which Sotomayor’s three-judge panel sided with New Haven, Conn., officials who threw out the results of race-neutral fire department promotional exams because they did not yield enough high scores from African-American firefighters. When no promotions were given as a result, Frank Ricci, a dyslexic white firefighter who came in sixth in the competition for eight lieutenant spots, filed a lawsuit with 19 other firefighters alleging racial discrimination.

Some might feel “empathetic” toward a learning-disabled civil servant who overcame the disadvantage by spending every spare hour studying after he had a friend record his textbooks onto tapes. Better yet, a constitutionalist would find the city’s race-conscious criteria to violate the requirements of Equal Protection. But Sotomayor wasn’t moved.

Like other liberal activists who assert the importance of empathy, Sotomayor remarkably finds the need to reach into her “heart” only when the litigant’s cause aligns with her own. In fact, as Clinton appointee Judge José Cabranes noted with some frustration, Sotomayor’s “empathy” with New Haven’s position was so relentless that she took unprecedented procedural steps to bury the claims of the firefighters.

In an attempt to prevent effective review, Sotomayor’s three-judge panel originally issued a one paragraph summary order affirming the district court’s ruling, then withdrew it and issued an unsigned opinion.

Neither the order nor the opinion made any attempt to seriously consider the firefighters’ arguments. According to Cabranes, they did not even address the core issues in the case. Thanks to judges like Cabranes, this attempt at evasion failed, and the case is now being reviewed by the Supreme Court.

Obama uses the rhetoric of one who believes that judges should be interpreters of the law and not policymakers, but his choice of Sonia Sotomayor proves that such statements are just rhetoric.

Both her public statements and her attempt to smother the arguments of litigants she disfavors (such as in Ricci) reveal that she is no defender of the rule of law, but an unabashed hard-Left judicial activist.