A Federal Fiscal Train Wreck? Who Cares – the Nationals Won the World Series…

David Thomas Roberts
|
Posted: Nov 04, 2019 12:01 AM
Share   Tweet
The opinions expressed by columnists are their own and do not necessarily represent the views of Townhall.com. 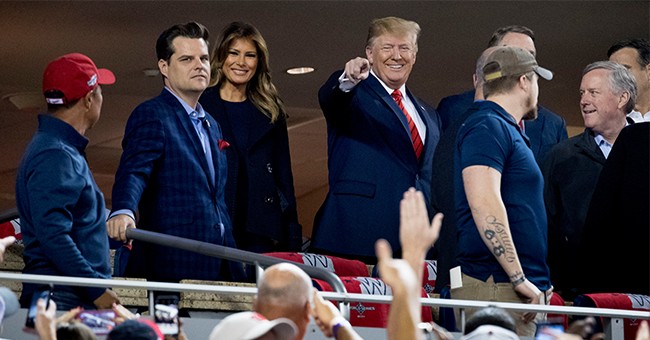 Many in the crowd at the Washington Nationals World Series game booed and chanted, “Lock him up!” when it was announced and displayed on the big screens in the stadium that President Trump was in attendance.

Why should the rest of us “Deplorables” in flyover country not be surprised?

After all, it’s likely a safe assumption that a significant portion, perhaps a vast majority of those attending the World Series games in Washington are exactly those Deep State bureaucrats in the Beltway swamp Trump is trying to get rid of.  The leftist government employees, elites, politicians and lobbyists who are living off other people’s taxes that affords them the opportunity to pay the high price of attending a World Series game were more than delighted to use the event to attempt to embarrass the President.

When computing the total benefits package of federal employees, the data is even more revealing, with the average federal employee compensation totaling $135,971 versus $75,381 in the private sector.

These are giddy days for federal employees.  That huge difference could make or break the decision to buy a high-priced and in-demand World Series ticket.  The days of civil servant employees trading private sector higher compensation for more job security in government jobs are long gone – now they have both.

For all the demonization by the Democrats of the Trump tax cuts, the federal government took in record income tax revenues for fiscal year 2019 (ending September 30th)  and reaching a whopping $1.71 Trillion, up $5.5 Billion from fiscal 2018.  Total receipts from all sources were $3.46 Trillion, however the government still spent more than it took in, spending $4.44 Trillion.

Run-away spending under Trump has continued as it did with previous administrations, but in case those who may need a civics lesson refresh, all spending originates and is authorized by Congress.  The largest category of spending is not the Department of Defense (ranking 3rd) and is eclipsed by the Department of Health and Human Services ($1.21 Trillion) and the Social Security Administration ($1.10 Trillion).

The federal deficit is expected to hit $1.1 Trillion in 2020 and the federal debt has surpassed $23 Trillion.  It doesn’t seem to matter which Party is in control in Congress or the White House.   The conservative dream of a balanced budget amendment, or any fiscal sanity whatsoever seems a million miles away.

In the meantime, we have a Congress totally consumed with Trump Derangement Syndrome and the all-out attempt through impeachment to invalidate the 2016 Presidential election.

But, what the heck – Washington’s baseball team won the World Series!

David Thomas Roberts is a serial entrepreneur, inventor, bestselling author and public speaker, who found himself battling the IRS as he—along with a long list of conservatives—was targeted year after year with audits. Robert G. Bernhoft, America’s #1 Tax Attorney claimed Roberts is, “America’s Most Audited Man.”  Roberts’ new book, “The Death of Liberty: The Socialist Destruction of America’s Freedoms Using the Income Tax” will be released in May 2019.