The Boys Who Saved the World for the Rest of Us 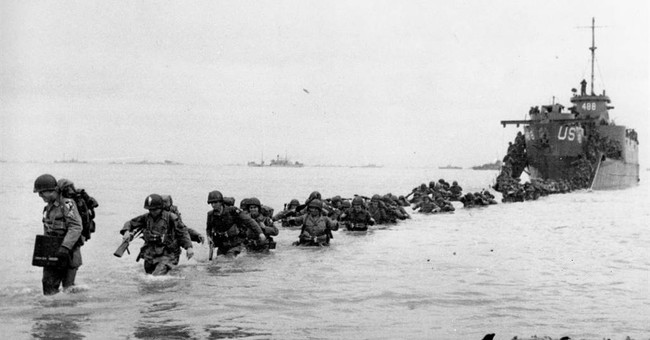 It made the papers, but was covered far from sufficiently, when Elisha “Ray” Nance died a few years ago at the age of 94. You may never have heard of him, but he was well known around Bedford, Virginia, a picturesque town located at the feet of the Blue Ridge Peaks of Otter. He delivered mail in that neck of the woods for many years. But it was for what he did before becoming a letter carrier that he should be best remembered.

Ray Nance was one of The Bedford Boys.

In fact, he was the last surviving member of his town’s contingent in Company A of the 29th Infantry Division’s 116th Infantry – a group that waded ashore on a beach nicknamed Omaha in a far away place called Normandy, 69 years ago. And of the 30 soldiers from Bedford, then with a population of 3,200 (today, about twice that), he was one of only eight from his hometown who lived to tell the story.

Ray lost 22 Bedford buddies that day, 19 of them in the very first moments of the battle. By the time he made it to the beach in the last of his company’s landing crafts to reach that point, he saw “a pall of dust and smoke.” He could barely see “the church steeple we were supposed to guide on.” He couldn’t see anyone in front, or behind him; only that he “was alone in France.” Mr. Nance was a hero “proved through liberating strife.”

In so many ways, it’s a different world today. But interestingly – even ironically – the challenges of our times are not completely unlike those days when bands of citizen-soldier-brethren from the greatest generation saved the world for those of us who would later be born to abundance and liberty.

Next to ingratitude, forgetfulness is the most serious indicator of cultural decline; and in truth, the two are intertwined. Thankfulness and remembrance are flipsides of the same precious cultural coin.

It always bothers me when leaders—those born out of due time—seem to apologize for America and our various endeavors to make this world a better (read: more free) place.

I find myself thinking back to a moment 29 years ago when, on the 40th anniversary of D-Day, President Ronald Reagan captured the attention of history and honored some of the other “Boys” who did so much for all of us on June 6, 1944. He called them “The Boys of Pointe Du Hoc,” and many of them were in his cliff-top audience in Normandy that day—June 6, 1984.

If you wanted to pick a more foreboding, certainly unlikely, place for an important military attack, you’d be hard-pressed to come up with a spot more uninviting than the imposing, rugged cliffs overlooking the English Channel four miles west of Omaha Beach. A few years ago, I had the privilege of visiting the Normandy region for a speaking engagement. I stood on the spot where the Great Communicator spoke and tried to wrap my mind around the quite-evident impossibility of what the United States Army Ranger Assault Group accomplished that fateful day. Mr. Reagan honored those men there:

Now, all these years later, we mark another anniversary of D-Day. But the boys of Bedford are now all gone. And noble ranks of the boys of Pointe Du Hoc have been thinned out by the course of time, as well. So, what happens when those who really remember are no longer around to remind us? What happens when eyewitness memory is no longer vivid and available and we must resort to stories handed down from generations before?

This is where (and why) memorials come in, monuments to important men and moments of a sacred and so-easily-forgotten past.

It has been a dozen years since the national D-Day Memorial opened in June of 2001 in that tiny Virginia town of Bedford, a community that gave so proportionately of its finest young men so many years ago. A while back, my wife and I, along with other family members, visited the D-Day Memorial. I talked to my grandkids about it all. The man who took us around was Mr. James E. Bryant. He had served as a Glider Infantryman with the 82nd Airborne Division and was part of all of his division’s campaigns from D-Day through to the end of the European war in May of 1945. He wrote a book about it all called, Flying Coffins Over Europe. I purchased a copy in the Memorial’s gift shop and asked him to sign it for me. I was honored and humbled to be in his presence. Really.

So, today I find myself missing the eloquence of Ronald Reagan and remembering how he honored “the Boys.” I also ponder the Great Communicator’s words from that inspirational speech in Normandy:

Strengthened by their courage, heartened by their valor, and borne by their memory, let us continue to stand for the ideals for which they lived and died.