On The Verge of An Intelligence Purge? 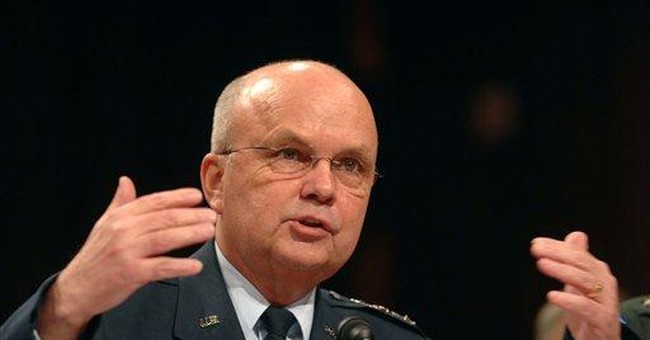 The current climate of suspicion, accusation, and posturing surrounding the relationship between various entities in our intelligence communities and two of three branches of the federal government should be a source of grave concern to Americans. While games are being played, we must ask: Are we safer today than we were two years ago, or four or eight?

There are many indications that good people, who have been doing good – though sometimes necessarily unseemly – work, are becoming increasingly frustrated with the politicization of their jobs and careers. It’s witch-hunting season on Capitol Hill.

A few weeks ago, former Central Intelligence Agency Director, General Michael V. Hayden, wrote an op-ed piece in the Washington Post entitled, “Defenders At Risk” He decried a “troubling reality. A whole swath of intelligence professionals – the best we had, the ones we threw at the al-Qaeda challenge when the nation was in extremis – are suffering for their sacrifice, being held up to recrimination for many decisions that were never wholly theirs and about which there was little protest when we all believed we were in danger.”

That last phrase is haunting: “when we all believed we were in danger.”

Are we acting like a nation in danger? Well, when it comes to economics, yes we are. With a mind-boggling willingness to suspend rational thought and reason, not to mention our constitution to fix things, we are all czared-up. The American economy is being reinvented and may one day soon become something even Fidel Castro could admire, should he live so long. Of course, the new super-important-political-potentates are virtually unaccountable to the same people who spend an inordinate amount of time these days insisting on knowing everything about everything from those who must, by the nature of their work, operate in the shadows.

But it’s the economy and yes, we are stupid.

In the 1930s, Joseph Stalin conducted a paranoiac purge that impacted all segments of Soviet society, notably the military. Having killed off most of his best generals and military minds, he and his nation paid the price in the early years of World War II. He bought time with his pact with Hitler in 1939, but was still nearly defeated two years later at the beginning of the Nazi invasion of his country. Some of those dead, but smart and experienced generals might have helped old Uncle Joe.

Are we on the verge of a “soft” purge in our intelligence and national security communities? Are beginning to lose people - citizens who have sacrificed and served with excellence – people we would certainly need if, God forbid, we found ourselves dealing with a major terrorist offensive here at home?

The answer is yes.

When it comes to the economy we will do virtually anything to get “the best and the brightest” into key posts because they are indispensable. But are we playing by the same rules when it comes to national security? The answer to that one is no.

All indications are that morale is low – and understandably so – in the intelligence and national security communities. Why? Likely, it’s because we have allowed for the polarizing stigmatization of these patriots and their noble work, driven by misguided and malicious self-righteousness.

The heirs to “the best and the brightest” of the 1960s are now running things. The torch has been passed to a new generation of experts who want to remake America in their image. One result may be that the most competent and experienced people, those who have been in often-dangerous trenches keeping us safe and free, may be squeezed out feeling largely unappreciated and woefully disrespected.

Ironically, and largely overlooked by a nation increasingly disconnected from its history, the way our federal government is working these days with respect to the fundamental issues of the economy and national security is completely at odds with how things were done back at the beginning.

Early on, this nation was a place for people to fulfill dreams and live lives without a nanny-state. Our third president, Thomas Jefferson, articulated the spirit of that age during his first inaugural when he said: “A wise and frugal government, which shall leave men free to regulate their own pursuits of industry and improvement, and shall not take from the mouth of labor the bread it has earned - this is the sum of good government.”

When it comes to national security however, more than two centuries ago men of vision understood the concept of danger. Why do you think it was that when those guys came up with oaths of office for various leadership roles they tended to talk about “all enemies, foreign and domestic?” It’s because there were then – as there are now – people who just don’t get us and who would really like to hurt us.

During the American Revolution, John Jay – later of Federalist Papers fame – wrote to Robert Morris (often referred to as “the financier of the revolution”): “Communicate no other intelligence to Congress at large than what may be necessary to promote the common weal [well-being], not to gratify the curiosity of individuals.” In fact, in The Federalist, No. 64, Jay argued: “There are cases where the most useful intelligence may be obtained, if the persons possessing it can be relieved from apprehensions of discovery. Those apprehensions will operate on those persons whether they are actuated by mercenary or friendly motives; and there doubtless are many of both descriptions who would rely on the secrecy of the President, and would not confide in that of the Senate, and still less in that of a largely popular assembly.”

These days that last phrase might read: “a largely un-popular assembly.”

Now, I want to make an observation. I may be quite wrong on this, but stay with me anyway. While all the punching and counterpunching is going on between Congress and the intelligence communities, President Obama has been sending mixed signals. He certainly wants to please those who put him where he is, and his campaign promises with respect to national security issues were pretty clear.

But since taking office, his rhetoric has toned down, at least a bit. And there is no doubt that he has shown some willingness to act counter to what he said while running for office. Gitmo’s in; Gitmo’s out. We’ll release the photos; no we won’t. Shifting gears is part of par-for-the-course-political-speak in Washington, but logic suggests something else may be involved.

Why would a man who was elected on a platform that was decidedly critical of the outgoing president’s intelligence and national security record ever be tempted to change his mind and act contrary to the will of his core constituencies?

There is only one logical answer: Because he has since learned some things that have changed his mind. Things he didn’t know while he was running for office. Details he didn’t have.

Additional facts tend to influence subsequent behavior. There is no other conclusion to be drawn from Mr. Obama’s “softening” on some once-ridiculed Bush administration policies and practices. The man now knows what he did not know before. How he deals with the stuff he now knows and how he responds to political pressure from those who got him elected in the first place will define his presidency and impact us all.

It would be better for the economy and for our actual physical safety if those running the show these days would read their American history and learn from the founders. Let people live their lives in freedom without being tortured with excessive taxation and tyrannical statist intrusion. And let those who have been tasked with keeping America safe alone to do their honorable work - without having to have a lawyer on speed dial.

I write this from a conservative perspective, but even a liberal writer such as Evan Thomas, editor of Newsweek, can make the point. He said in February of 2004, on a local Washington, D.C. television show:

“I really fear these investigations, if they turn into witch-hunts. The worst things that can happen is a demoralized CIA that’s back on its heels, that thinks everybody is against them, that they have to hire lawyers [and] testify before Congress. If you’re constantly pulling up the flowers to see if they’re growing, you could do more harm than good.”