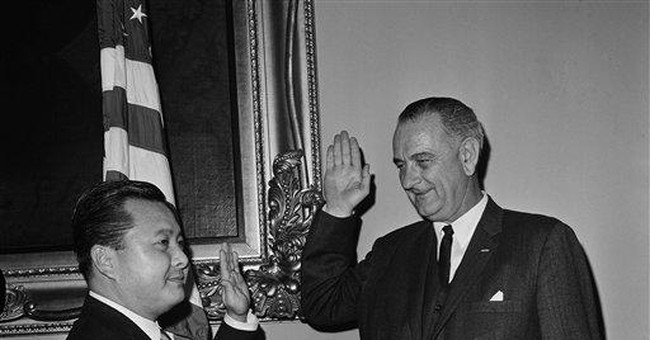 When Lyndon Johnson was a boy growing up near the Pedernales River in the Texas hill country his parents would regularly play a record on their Victrola.  But it wasn’t music.

It was William Jennings Bryan, the Great Commoner, who was known for his charismatic oratory and populist ideals.  This was one factor, though small and symbolic, in how the future president developed the ideas he would work feverishly to translate into reality during his frustrated presidency.

Though he was no Bryan when it came to having a way with words, he did give a famous speech articulating his views – and initiating a torrent of policy initiatives – just a few months after he came to the nation’s highest office following the tragic death of John F. Kennedy in Dallas.  Johnson was riding high in the polls and en route to a landslide election that fall, when in May of 1964 he went to Ann Arbor, Michigan to deliver the commencement address before 80,000 at the football stadium on the campus of the University of Michigan.

The past was very much in the tall Texan’s mind as he spoke that day – both distant and recent.  He likely heard the scratchy but memorable words of Bryan echoing in his brain, but he also was reminded that just one year before President Kennedy had used another commencement in another place very effectively.  That venue was American University in Washington, D.C. and Kennedy had talked of war and peace in a way that overshadowed the diploma distribution that day.

Always conscious of any comparison with his far more elegant and erudite predecessor, Johnson was determined to make some history of his own.

What he had to say that day – and all that followed – signaled sweeping change in how government functioned in, around, and over culture.   Lyndon Johnson talked in glowing terms that day about his vision for “The Great Society.”  His rhetoric did not match that of Bryan, nor his eloquence that of Kennedy, but his content was designed to pick up where another one of his heroes left off.  That hero was Franklin D. Roosevelt.

In a very real sense, as Barack Obama unveils – almost daily – new components of the kind of change he insists people voted for last November, the best historical comparison may not be the New Deal of 75 years ago.  It could actually be what Lyndon tried to do 45 years ago.  Of course, wise insiders will never admit this because it didn’t go that well for our 36th president – or the country, for that matter.

When President Johnson spoke to those gathered on that sunny afternoon he said:

But most of all, the Great Society is not a safe harbor, a resting place, a final objective, a finished work. It is a challenge constantly renewed, beckoning us toward a destiny where the meaning of our lives matches the marvelous products of our labor.”

And, in language with a where-have-I-heard-that-before ring:

“I intend to establish working groups to prepare a series of White House conferences and meetings -- on the cities, on natural beauty, on the quality of education, and on other emerging challenges. And from these meetings and from this inspiration and from these studies we will begin to set our course toward the Great Society.”

The most dynamic era of sweeping political change in a generation began that day.  Federal spending tripled over the next ten years.  And it took several decades to undo the damage – Nixon started the job, Reagan accelerated it, and – ironically – Clinton finished it off.

But Santayana was so right.  History ignored is often repeated.

How does all of this compare to what President Obama is attempting to do these days?  Well, there are some clear and obvious similarities, but also some fundamental differences.

First, Johnson was no Obama - and vice versa.  Our current president is a much better speaker than LBJ (heck, Gerald Ford was), and has charisma reminiscent of that possessed by Jack Kennedy (a trait about JFK that LBJ both resented and admired).

But charisma and speaking ability aside, Mr. Johnson was a much better personal politician than Mr. Obama – particularly when dealing with the egos, nuances, and patterns of Congress.  Most historians recognize (some very reluctantly) that John F. Kennedy was good at “speechifying” but lacked the ability to get stuff done on the Hill.  Johnson succeeded where Kennedy didn’t – or couldn’t.

It remains to be seen if Barack Obama can translate oratory and personal popularity into actual policy as he works with congress.  Will he be strong enough to stand up to leaders in his own party?  The mind fairly boggles at the idea of Lyndon Johnson being tempered by Senate Majority Leader Mike Mansfield (D- Montana) or Speaker of the House John McCormick, much less by Senate Minority Leader Everett Dirksen (R- Illinois) or his counterpart in the House, Gerald Ford (R- Michigan).

The only guy who could have given Lyndon a run for his money was Sam Rayburn, but the legendary “Mister Sam” had died in late 1961.

Our 36th president was famous for what was called “the Johnson Treatment” – a method of political arm-twisting that would presumably be seen today in the same category as CIA torture.  Lyndon B. Johnson was the Jack Bauer of personal politics.

Those were heady days for President Johnson who soon found himself having been elected in his own right by a landslide margin and with a decidedly Democratic Congress on his coattails, if not in his pocket.  After the 1964 election, the Senate was 68-32 and the House 295-140 lopsidedly in favor of LBJ’s party.

However, the biggest difference between what Johnson attempted to do in the mid-1960s and today is that LBJ launched his sweeping change against the backdrop of a stable economy.  In fact, as Randall B. Woods has written in LBJ: Architect of American Ambition, “the Great Society was conceived and implemented during a period of growing prosperity.”  Yet even then, it was largely a failure and ultimately politically repudiated.

Many wonder if President Obama, for all his best intentions, is overreaching by trying to do too many things so quickly and simultaneously.  The answer to this might, in fact, be found in the story of Lyndon Johnson – a man with big dreams, a good heart, and gigantic ambitions.

While Lyndon worked the system as only he could do to bring forth his vision for The Great Society, he was mired in “that war in Asia.”  And when LBJ went back to his Texas sanctuary near the Pedernales upon retirement, he did so as a man stretched,  broken, defeated, despised, and in ill-health.   For the rest of his days – which turned out to be not so many – he fumed about how Vietnam had been an altar of sacrifice for his best hopes for this nation.

I will not try to make a connection here between Barack Obama’s goals and some war over there.  But what I will say is this: It is very possible that the economy itself might be an ironic Vietnam for the 44th president.

It’s very unlikely that anyone on his team a year ago envisioned the kind of economic meltdown we have now seen.  Mr. Obama has assumed the office of the presidency during difficult times.   Certainly, he must feel a sense of frustration about it all.  He has dreams and ambitions that are threatened by a troubled economy.

But sometimes dreams have to give way to reality.  Just as Lyndon Johnson couldn’t do guns and butter to the max for too long before something had to give, so President Obama needs to consider taking a page from another famous political playbook: “It’s the economy, stupid.”

He also needs to read the fine print of history and note that LBJ lowered taxes to continue to stimulate a growing economy.  Proposed by President Kennedy, but stalled in Congress, Johnson led the effort to reduce the top marginal tax rate by 20 percent in February of 1964.  He knew that a growing, prosperous economy was the only realistic foundation for what he wanted to do.

If Lyndon Johnson, master politician and visionary, couldn’t really make his “new deal” work against the backdrop of prosperity – can Barack Obama in these days of economic chaos?

Probably the most telling comparison between 1964 and now is that back then polls showed that 76 percent of Americans trusted the federal government to do what was right.  Forty years later that confidence factor is less than half.

But the fear factor is growing by leaps and bounds.