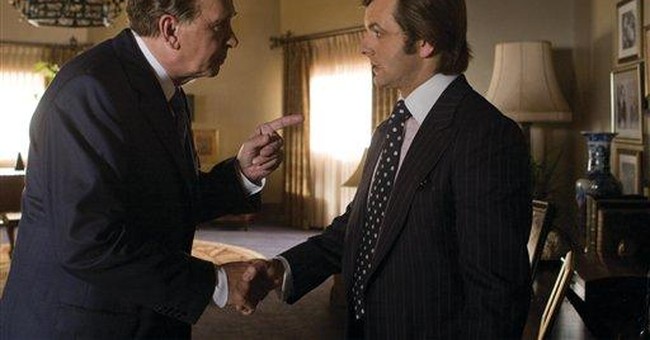 While conducting a recent radio interview with Robert Nedelkoff, who since 1997 has worked on behalf of the Richard Nixon Foundation at the National Archives in College Park, Maryland, a caller asked us if we were trying to “rehabilitate” the 37th President of the United States.  We were discussing the new movie - Frost/Nixon – from the standpoint of historical accuracy.

My initial comment to the caller was that it would be rather difficult to rehabilitate anyone during a 12-minute radio segment, but of course, I understand what he was trying to say.

Richard Nixon remains a complex, fascinating, controversial, and formidable figure nearly 15 years after his death – and 35 years after the whole agonizing period of Watergate.  To some he personifies absolute evil.  They see him as a sinister caricature reminiscent of the work of political cartoonist Herblock.

To others – especially as the years go by and we learn a lot more about all the other presidents – he is remembered for the totality of his life and work.  Watergate was an unforgettable episode – and certainly a sad chapter in his life and our history – but Mr. Nixon was far from the one-dimensional character defined by his past and present detractors.

There was a lot of talk while Mr. Nixon was president about an “enemies list.”  But this does not discount the clear fact that Richard M. Nixon did, in fact, have many enemies - probably more per capita than any president before or since.  A lot of people hated the guy’s guts for a generation and worked tirelessly for the day when they would see him leave the national political stage.

And – as he told David Frost in those now-famous interviews – he “gave them a sword” to use against him, one they gleefully used with “relish.”

Richard M. Nixon still has enemies.  The names and faces have changed with the passing of many old foes – but there never seems to be a shortage of people who keep the anti-Nixon flame burning.

No, I am not trying to rehabilitate Mr. Nixon.  Certain things can never be undone.  But he did find a way to restore himself with a sense of personal persistence and resilience that is quite rare.  History will continue to analyze, judge, and interpret who he was and what he meant to our national narrative. But there is no way to change the basic fact that the man was on five national tickets – a feat only equaled by Franklin Delano Roosevelt.

Was Richard Nixon worse than all the presidents before and after?  Of course not – he had his flaws and faults and they were played out before the nation’s eyes in a way that hadn’t happened before.

But it has happened with regularity ever since.

The more historians dig through the archaeological crust covering the machinations and motives of all those who lived and worked at 1600 Pennsylvania Avenue, the more we learn of things not known back in the day.  Occasionally, something pops up that begs the question: “Had the people known about this back then, would this president have survived?”

Ten years ago we impeached Bill Clinton for complications due to an illicit sexual affair.  He was not thrown out of office – nor did he resign.  But he did lie under oath and in a very real sense disgraced the presidency.  Yet, he remains a significant political player and will now have the ear of a secretary of state.  The whole impeachment – the scandal – the embarrassment – the ugly stuff is long forgotten.

Why is that?  And – why is it that Mr. Nixon’s shortcomings must be forever rehearsed and punished?

What if the public at large had known about John F. Kennedy’s shenanigans when he was president?  Several years ago, JFK confidant and admirer – the late Hugh Sidey of Time magazine – suggested in an on-camera interview that had Kennedy not been assassinated, and had he won re-election in 1964, our 35th president might very well have had to step down before his second term was finished.

Sidey indicated that some of JFK’s “extra-curricular” activities might have brought him down (there was a lot of “there – there” behind the scenes and under the covers in that so-called “brief and shining moment”).  From being hyper-medicated (courtesy of Dr. “Feelgood”) while discussing matters with his Soviet counterpart, to a sexual addiction that led him to risk a dalliance with at least one possible East German agent, he lived on the edge of disaster.  I mean, seriously – can you imagine if George W. had done that stuff – or Richard Nixon?

Actually, you can’t – because they understood marriage vows – but I digress.

This is not the stuff of tabloids – all one has to do is go to the nearest bookstore or library and read biographies even written by JFK admirers.  Suggesting that Jack Kennedy had flaws and a propensity for high-risk behavior is not reserved for some “lunatic-fringe” - it is very much the widely understood and accepted version of his life and work.

I think any reasonable observer will note that along the way about 35-40 years ago something began to change in this country.  It had to do with how stories were covered and reported.  In fact, the modern era of what we now take for granted as “investigative journalism” was born against the backdrop of the event that gave rise to a now-familiar suffix attached to any and every potential political scandal – Water-GATE.

None of this is to excuse some of the stuff that went on in the Nixon White House.  I simply want to make the point that had the kind of media scrutiny we have now come to expect been applied to some of the presidents before Nixon, we just might have seen one topple before number 37.

Watergate changed all the rules and how the game was played.

Now comes another movie based on a screenplay by Peter Morgan - who wrote the script for The Queen a couple of years ago.  It is directed and produced by Ron Howard and stars Frank Langella as Mr. Nixon and Michael Sheen (who played Tony Blair in The Queen) as David Frost.  Before the film there was a play – I saw it on Broadway.  It is all somewhat based on a book written by James Reston Jr. called The Conviction of Richard Nixon: The Untold Story of the Frost/Nixon Interviews.

We are cinematically transported from the dawn of the age of Obama back to another time and place – the days of Nixon.  For many of us it conjures up memories – some bad, some indifferent – all complex.  But for many who will see the film there will be the tendency to confuse image and dramatic license for authentic history.  This film is, in all fairness, not as bad as an Oliver Stone hatchet-job, but it does have material it in that – well – never actually happened (e.g., a bizarre drunken late-night phone conversation that Mr. Nixon did not make – words are put in his allegedly inebriated mouth that he never uttered – and some viewers will accept them as factual, which is sad).

At a recent screening here in Washington, D.C. at the National Geographic Society headquarters, Ron Howard, Peter Morgan, and James Reston Jr. were joined by historian Robert Dallek – and a host of others in the audience – to discuss the film.  It was suggested that Frost/Nixon is “a metaphor for George W. Bush” – presumably because some in the audience see number 43 as someone who has “abused” the office of the presidency (a common accusation from political opponents who disagree – things can’t be left on the level of differing opinions, the other guy has to be demonized).

Jim Pinkerton has written about this and how Chris Wallace of FOX News Sunday braved “the liberal wind” and dared to challenge this notion as “a grave misrepresentation of history, then and now.”

Historian Dallek responded that, while Nixon’s peccadilloes were well known because of his tapes, it will be some time before such similar information comes out to illustrate the “full horror” of the Bush presidency.

In a way, Robert Dallek highlights something very important that should be kept in mind when we analyze the life and work of our leaders.  He seemed to suggest that historians are going to search diligently for evidence to prove something they already believe to be true – that George W. Bush has abused the presidency.

Well – I would suggest that if you apply that kind of scrutiny – and moral judgment (fair and balanced moral judgment) – to most of the presidents over the past 100 years, you will find stuff that would have brought some leaders down had it all been noised about contemporaneously.

There is a reason no one tapes stuff in the Oval Office anymore.  The rules of the game changed about 35 years ago.  Had they changed 45 years ago, John F. Kennedy might have found himself sitting down with David Frost.