Will the Trend Continue? 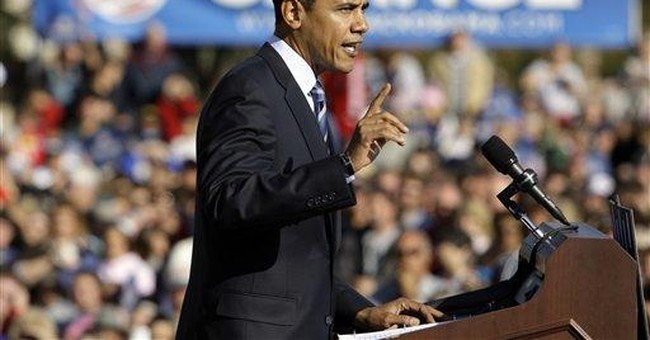 With just a little more than three weeks to go before America goes to the polls to elect the next president, Barack Obama maintains a lead in the polls.  To use a Richard Nixon phrase from election night in 1960, “if the trend continues…” he will be our next president.  And he will most likely be working with an overwhelmingly Democratic Congress.

But will the trend really continue?  Can the momentum in this roller coaster race shift back to McCain?   Might Obama be peaking too early?

The fact is, with all the dynamics of this historic political year – including recent economic developments - the election should really be over.  The lights should be turned out.  Oprah should have finished her final chorus by now.

Yet John McCain remains within striking distance, despite the fact that he is the candidate perceived as representing a very unpopular incumbency.

Why?  Possibly it is because Americans are afraid, not only of what is happening on the road from Wall Street to Main Street, but of the idea of turning the reins of leadership over to an unproven neophyte.

Or maybe it has something to do with a growing reluctance to give one party the run of the place during chaotic times.

If Mr. Obama and a Democratic Congress are, in fact, elected, they will be well positioned to launch a top-down government-knows-best blitz of socio-politico activism.  They would be able to reinvent America in their image – or at least try.  This has only happened a couple of times in the past century: 1932 and 1964.  And in those cases the government’s hegemony over all things individual grew exponentially.  First, there was the New Deal; then there was the Great Society.

This is a theme John McCain should return to again and again between now and November 4th.  He should ask Americans at every turn: “What do you think is better for the nation during these extraordinarily difficult days – one party in control – or a two-party system working in the best interests of the people?”

Harry Truman campaigned, quite effectively in fact, in 1948 against the “do-nothing” 80th Congress.  He seldom even mentioned the name of his opponent (the infamous Mr. Dewey) – not even calling him, “that one” – “the one” – or “that man.”   But he did not mince words when it came to blasting the Republican Congress.

Harry was the original comeback kid.

Far from a “do-nothing” Congress, however, the looming 111th version promises to be a “do-everything-for-everyone” Congress.  That is, unless there is someone in the White House with the courage to say “no” - a lot.

Everything we know about Barack Obama suggests that he would have a difficult time resisting a Democratic Capitol Hill.  His tepid handling of certain associations (Ayers, Rev. Wright, etc.), suggests that he has difficulty being decisive and confrontational. It is very hard to imagine a scenario where Harry Reid or Nancy Pelosi would be stonewalled.

One suspects that what he had to say about labor unions in his book, The Audacity of Hope, indicates how responsive he would be to political cronies: “I owe those unions. When their leaders call, I do my best to call them back right away.  I don’t consider this corrupting in any way; I don’t mind feeling obligated.”

“Feeling obligated” – the motto of an Obama White House.

The problem with a candidacy that promises everything is that it is hard to say no when pledges come home to roost.  Possibly there will be a scene on election night, somewhere in the Obama suite at Hotel Change, reminiscent of the ending of the 1972 movie, The Candidate.  Bill McKay, played by Robert Redford, a surprisingly successful aspirant for a U.S. Senate seat from California, takes a few of his staff into a room after learning he had won and asks: “What do we do now?”

Mario Cuomo used to talk about politics being “poetry,” with actual governing being “prose.”  He was right.  And Barack Obama is a pretty good poet.  He can arrange words in a way that inspires audiences.  When asked what the poet actually said, however, many misty-eyed hearers are at a loss to explain.  It is that way with poetry, the trick is to figure out what the poet really meant.  Some poets have stumped students for centuries.

John McCain can actually still win this thing.  But he has to kick his campaign up several notches.  It is time for an aggressive political fourth-quarter offensive, culminating in an energetic two-minute drill.  He has to manage the clock, move quickly, and put the Obama campaign on the complete defensive.

One issue to seize is found in the answer Barack gave in the last debate on the issue of health insurance.  He clearly said that he believed health care was a “right.”  Really?  Is a “right” something that is done for you, or something you are granted in general but must exercise yourself?  He believes all of us have the right to have health care given to us.  This is new ground.

What’s next?  Is there a housing right?  How about food?   Thomas Jefferson wrote in The Declaration of Independence about our rights to life, liberty, and the pursuit of happiness.  On the last one, he borrowed from John Locke – “happiness” being a euphemism for property – the “pursuit of property,” in other words.

The key word back then was “pursuit.”  Property was not conferred as a “right” – but we had the right to go for it.

Americans have always had a right to obtain health care, in the sense of not being legally prevented from having it.  Whether it is accessible or affordable is, of course, another matter – and the pertinent issue.  But calling it a “right” implies entitlement.

Mr. McCain should also, during these final three weeks of campaign 2008, rally the values voters on the right.  As I listen to my “oldies” station in the car, I have heard many radio ads warning that John McCain wants to take away the “right to choose.”  These ominous sounding words are always followed by the voice of Barack telling us he “approved this message.”

I often wonder what it would be like for someone to have been frozen in time, or castaway on some island, to come back and hear some of this.  Right to “choose” what?  Why don’t they finish the sentence?  Why not just come out and say: “the right to choose to have an abortion?”

It is probably because of the effective audacity of deliberately incomplete mantras.

The facts are, that Barack Obama has consistently supported and voted for, not only abortion rights, but also some of extreme and abhorrent examples of the practice – including voting three times in the Illinois Legislature to thwart bills protecting the rights of clearly alive survivors of abortion.  In the U.S. Senate he stood against a bill requiring parental notification if a minor had an abortion across state lines.

He has also intimated that early on in his presidency he would sign the Freedom of Choice Act, which would not only re-legalize partial-birth abortion, but also lead to tax-payer funding.

And is there any doubt about what kind of jurist Mr. Obama would appoint to the Supreme Court?  It is very likely that the next president will have a shot to replace a current liberal member of the nation’s highest court.   In a chronically 5-4 court, the next appointment will define its direction for years to come.

Pro-life conservatives are very close to critical mass on the court – but that is only possible with a John McCain presidency.  This is a vital thing for the current evangelical Diaspora to seriously consider before bailing on the Republicans this time around in favor of “change” they really can’t seriously believe in.

Rick Warren, who moderated the best debate of the year back in August, told the Wall Street Journal a while back that the notion that the evangelical vote is “up for grabs” and “over-hyped.”  And he held up his thumb and forefinger an inch apart when asked about the “significance of the evangelical left.”

There is much talk about the Bradley Effect this year – the idea that polls may be deceiving and some will simply vote differently than they have been indicating to pollsters.  The theory is that these votes will reveal a secret reluctance to vote for Obama because of his race.

Frankly, I do not think this will be much of a factor at all.  I hope – and very much believe – that we are better than that as a nation.  Dr. Martin Luther King Jr. longed for a day when a person would be judged, “not by the color of his skin, but by the content of his character.”  Race is not a legitimate political consideration.

On the other hand, I do wonder about what I might call the Carter Effect.  By this I mean the idea that some, who have been enamored of Mr. Obama’s charm and charisma, and have connected with the whole idea of change, will have an awakening in the voting booth.  Will they remember how conservative faith-voters believed in Jimmy Carter and thought he was one of them?

Those 1976 voters soon felt betrayed.  And so will some who abandon long-held values for short-term political gratification this time around.

Though Barack Obama has reached out to evangelicals this year (particularly younger ones) in a way not seen by a Democrat in 32 years, this should not be interpreted to mean that he is, in fact, an evangelical.  He is not.

Stephen Mansfield, author of the book, The Faith of Barack Obama, recently told Christianity Today: “There is no question Obama is a Christian, but he is definitely of a post-modern, liberal, and, to some small extent, black liberation theology perspective.”

It is a free country, and I certainly believe he has the right to believe what he believes.  My point is simply that it would be wrong for evangelicals to vote for him because they buy into the idea that he thinks like them.  He does not.

Mr. McCain has his own history with evangelicals – and it has not always been a friendly one.  But his clear pro-family positions and fervent “country-first” patriotism is very Ronald Reagan.

And Ronald Reagan beat Jimmy Carter, who after four years in the White House, had proven himself to be – well – Jimmy Carter.

'End of the Era'? What Is CNN's Don Lemon Going to Do Now?
Townhall
'Not even popular in the quasi-honeymoon stage': Glenn Greenwald BRUTALLY honest about how unpopular Kamala Harris really is and OUCH
Twitchy
Report: Biden Snapping and Losing It in Profanity Laced Tirades at Staff
Redstate
Legacy Media Finally Calls Out the 'Experts' for Their COVID-19 Misrepresentations
PJ Media