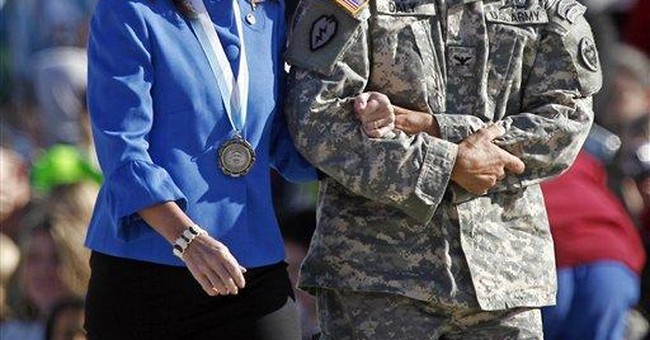 The rollout of Sarah Palin as the Republican vice presidential nominee appears to be morphing into a full-fledged juggernaut.  Democratic strategists, not to mention their nominees, continue to scratch their heads while trying to play the familiar political games of catch-up and gotcha.

Governor Palin is a breath of fresh air to some, and a dangerous tornado to others.  But all agree that she has changed the dynamics of a campaign that was beginning to appear inevitable.  She has been compared to leaders of the past.  During her now famous acceptance speech, she brought up the name of Harry S. Truman and talked about sharing a lot in common with the man from Missouri.

Some, though, have allowed their reach to exceed their grasp in trying to suggest that Sarah Palin could be the second coming of Theodore Roosevelt.  The lady from Alaska may very well prove to be the real deal and continue to demonstrate that she is a natural on the national political stage.  She may, in fact, be a unique politician who can make an indelible mark on the times.  But we must be careful about rushing to see her as the reincarnation of anyone.

She may be something much more rare and valuable.

To say that Sarah Palin is no Teddy Roosevelt is not an insult – far from it.  And Joe Biden would be wise to resist the temptation to use a flippant Lloyd Bentsen-like line during their debate next month.  She may well prove to transcend Roosevelt and other usual-suspect names brought up to try to define her.   Sometimes people are just themselves and grow to become the kind of leaders others want to emulate.  This was certainly the case with TR.

There are some similarities between the Barracuda and the Bull Moose – and these have led to obvious comparisons.  She is young – so was Teddy when he became the vice presidential nominee in 1900 at the age of forty-one.  She has served as a governor for only a couple of years.  It was the same with TR - less than 2 years as chief executive of New York.  She likes to hunt, so did Mr. Roosevelt.   She has a passion for reform.  Again, ditto Teddy.   Mr. Roosevelt had a large family – so does Sarah.  And there is a compelling similarity between the two in the idea of taking on their own party, if need be – the so-called maverick factor.

There are, however, some very clear differences between our twenty-sixth president and the woman who would be vice president next January 20th.

Garret A. Hobart died on November 21, 1899.  That name may not ring the proverbial bell with many, but he was the vice president of the United States at the time, serving under President William McKinley.  They had soundly defeated William Jennings Bryan in 1896, and it was looking like the next election would be a rematch with the great orator.

With the political playing field suddenly wide open, Theodore Roosevelt found himself the subject of relentless speculation and discussion about the number two spot on the ticket in 1900.  He was, at the time, completing his first year as governor of New York.

However, unlike Sarah Palin this year, Mr. Roosevelt was a well-known hero and household name by the time of his nomination to run with McKinley.  This meteoric fame was driven by his exploits during the recent Spanish-American War.  The country was enamored of the man who led a ragamuffin regiment known as the Rough Riders to success in the Battle of Kettle Hill and San Juan Hill (the latter eventually describing both actions).

When war broke out in 1898, TR was serving as Assistant Secretary of the Navy (a post his distant cousin, Franklin, would hold during World War One).  He used his time there to prepare for the coming conflict, one he welcomed and advocated.  Then he resigned to serve as a cavalry officer.  He thrived on strenuous action.

His new found status as a hero-celebrity paved the way for his move to the governor’s mansion in Albany, just months after the famous July 1898 battle.   And he hit the ground running there, as well - though he did find time to complete the writing of his thirteenth book.  As governor, he was passionate about reform.  In fact, one of the reasons so many New York Republicans liked the idea of Roosevelt running for vice president is that they would not have to deal with his annoying reform agenda.

William Allen White, a newspaper editor from Kansas who would later be known as the Sage of Emporia and spokesman for America’s middle class, wrote in 1899:

“There is no man in America today whose personality is rooted deeper in the hearts of the people than Theodore Roosevelt.  He is more than a presidential possibility in 1904; he is a presidential probability.   He is the coming American of the twentieth century.”

But Theodore Roosevelt wondered if his fame would endure long enough to be a viable candidate in 1904.  He told one supporter, “I have never known a hurrah to last for five years.”  Not known for patience or passivity, TR no doubt felt a sense of urgency to strike while the iron was hot.

He had his fans.  But he had also made more than a few enemies over the years during his career climb from New York State Assemblyman, to service on the United States Civil Service Commission, to the presidency of the New York City Police Commissioners.  Though he liked the idea of speaking softly and carrying a big stick, he was not actually known for a tempered-tongue.  So it should not surprise us that some powerful people were less-than-impressed with Roosevelt and actually feared the idea of him anywhere near the White House.

Republican big-wig, Mark Hanna – U.S. Senator from Ohio and one of the most powerful politicians in the nation - famously remarked about Teddy’s nomination for the vice presidency: “Don’t you realize that there’s only one life between that madman and the White House?”  He later told President McKinley, “your duty to the country is to live for four years from next March.”  History, of course, tells us that Mr. McKinley did not live that long.  He was shot while visiting the Pan-American Exposition in Buffalo, New York.  He died eight days later.

On September 14, 1901 Theodore Roosevelt, at forty-two years of age, became the youngest man ever to become president of the United States.

People do not compare Theodore Roosevelt to his predecessors.  Similarly, you never hear it suggested that Ronald Reagan was like someone before him, or that Franklin Roosevelt reminded the nation of an earlier president.  They were not wannabes or hero-worshippers.  The nation had not seen their likes before.  And they have been used ever since as benchmarks for great executive leadership.

They were, in fact, American originals.

It is, of course, way too soon to predict such greatness for Sarah Palin, but searching for historical reference points to help us accept or understand any of the current candidates may actually miss the point.

We might just be seeing someone who does not need to remind us of “so and so.”   Maybe there is a fresh American original on the political stage right now.