Sens. Feinstein and Durbin Are Fooling No One

David Limbaugh
|
Posted: Sep 08, 2017 12:01 AM
Share   Tweet
The opinions expressed by columnists are their own and do not necessarily represent the views of Townhall.com. 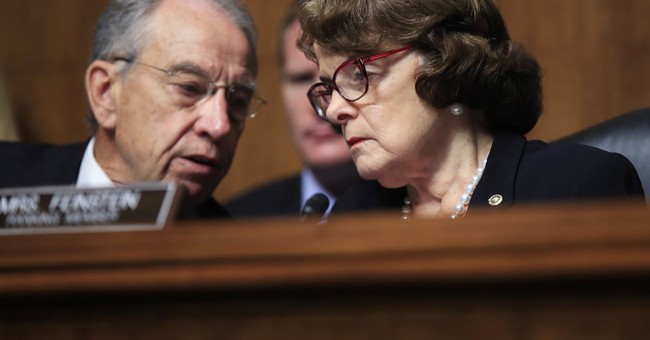 It's rich that rule of law-scoffing Democratic Sens. Dianne Feinstein and Dick Durbin grilled one of President Trump's judicial nominees, law professor Amy Coney Barrett, for placing her religious beliefs above the law.

During Barrett's appearance before the Senate Judiciary Committee on Wednesday, Durbin asked her, "Do you consider yourself an orthodox Catholic?"

Apparently, Durbin thought he had Barrett dead to rights because of assertions she made in a law review article she co-wrote with her law professor in 1998 as a third-year student at Notre Dame Law School. In the article, "Catholic Judges in Capital Cases," the authors discussed the question of whether "orthodox" Catholic judges (and other judges morally opposed to the death penalty) should sit in death penalty cases.

In these cases, the judges are faced with the dilemma of being bound "by oath, professional commitment, and the demands of citizenship to enforce the death penalty" while "also (being) obliged to adhere to their church's teaching on moral matters."

On reviewing the Roman Catholic Church's teachings and the relevant federal statutes, the authors concluded that judges faced with such a dilemma should recuse themselves in applicable cases, thereby honoring their moral duty without violating their legal duty.

Seizing on the term, Durbin thought he would corner Barrett into admitting that she is an "orthodox" Catholic, presumably to impugn her as some Roman Catholic fundamentalist whose religious extremism would lead her to flout the Constitution. Durbin's slimy distortion of Barrett's unambiguous words revealed that he either hadn't read her article or deliberately twisted her meaning. In this sleazy effort to entrap Barrett in a constitutional snare, Durbin landed himself in one of his own, because it is inappropriate for a senator to ask such a question of a judicial nominee, as the Constitution prohibits religious tests of any public officer.

Sen. Feinstein's questioning was just as odious, as she upbraided Barrett for her Catholic faith, saying, "The dogma lives loudly within you, and that's of concern."

It's particularly reprehensible for these secular-virtue-signaling senators to invoke their pernicious little trick bag to discredit Barrett because in her law review article, she explicitly addressed this very question and left no doubt that the law must control.

Indeed, the entire point of the article was to acknowledge and seek resolution for a judge's dilemma in this very situation. Shamefully, the scolding senatorial duo intentionally ignored Barrett's emphatic assertion that "judges cannot -- nor should they try to -- align our legal system with the Church's moral teaching whenever the two diverge."

That is, Barrett unequivocally affirmed judges' duty to the Constitution and the law and concluded that a judge may not superimpose her religious beliefs onto the legal system. The senators ignored that because it dispositively negates the impression they wanted to create with their questioning -- that Barrett would subordinate the law to her religious beliefs.

Isn't it comical that these two senators were feigning fealty to the rule of law when the Democratic Party advocates an activist judiciary, whereby judges make laws instead of merely interpreting them?

The senators are not concerned about the integrity of the law. They are just hostile to those with a decidedly Christian worldview, even if in this particular case the Catholic position happens to generally align with the politically liberal view on the death penalty.

Sadly, the modern liberal position concerning so-called church-and-state issues has become increasingly extreme. Liberals are no longer satisfied with their already bloated interpretation of the First Amendment's establishment clause, which was originally designed to prevent the federal government from establishing a national church or religion. They've long been trying to remove most symbols and expressions of Christianity from the public square -- even sometimes when the connection with the federal, state, county or local government is merely tenuous.

But now they are going even further, suggesting that the personal religious beliefs of public officials in any branch or level of government -- not just the judiciary -- should in no way influence their policy preferences. The absurdity of this should be obvious to any fair and reasonable observer. The policy preferences of every human being -- and thus every public officeholder -- are necessarily informed by his or her worldview.

Let's just ask the senators whether their own worldview leads them to oppose the death penalty and, if so, whether that worldview would prevent them from following the law in death penalty cases. Better yet, would their worldview -- religious or not -- lead them to ignore and rewrite the law in any other areas, such as abortion, immigration, health care and taxes?

We know the answer. Ends-justify-the-means leftists, almost to a man (or woman), have no hesitation in subordinating the law to their policy goals. It's only when a Republican officeholder or nominee is openly Christian that they get worked up about this. But as usual, their simulated concern is misplaced, because Christian constitutionalists are the last people they need to fear in such cases. As adherents to the rule of law, they will not, no matter how religious (or "orthodox") they are, ignore the law.

Despite their posturing, Durbin and Feinstein know that most liberal senators wouldn't even face a dilemma in such cases. If the existing law doesn't suit them and they don't have the political clout to amend it through the proper legislative process, they'll just ignore it as a bygone relic. They are fooling no one.