David Limbaugh
|
Posted: Apr 14, 2017 12:01 AM
Share   Tweet
The opinions expressed by columnists are their own and do not necessarily represent the views of Townhall.com. 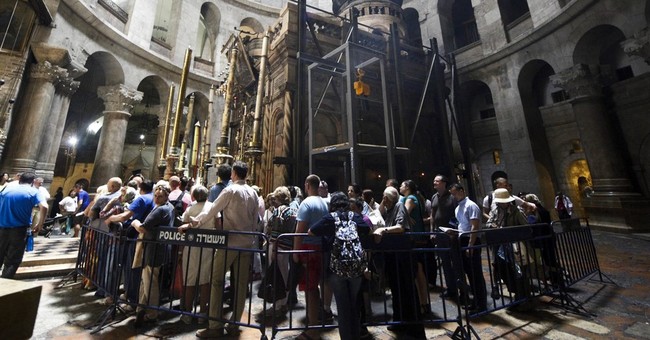 I have a new book out -- "The True Jesus," which is my third Christian-themed book -- and I want to tell you a little bit about it.

In my previous books, I related that I didn't always embrace the Bible and that I came to accept Jesus Christ later than some people do -- after studying the evidence for Christianity's truth claims. Contrary to a common misconception, there is an abundance of evidence that undergirds the Christian faith, and I examined much of that in my previous books.

This book is different in that it allows the Gospels to speak for themselves, as they are their own best apologetic.

I have developed a deep passion for the Bible and theology over the years, and I want to share that to help teach people about it and inspire them to read it. I initially intended this to be a sort of layman's guide to the New Testament, having focused on the Old Testament in my most recent book. But as I began writing, it became clear to me that I couldn't cover the entire New Testament in as much depth as I wanted, so I decided to narrow the scope to the Gospels alone.

When you read the Gospels with an open mind and heart, you will discover that you are encountering Jesus -- walking with him, observing him in action, and sitting at his feet and listening to his teachings. It is impossible to read these four books without recognizing that they are describing a being so sublime that no human author or group of authors could have conceived him. The Gospel writers -- Matthew, Mark, Luke and John -- repeatedly report that the crowds were amazed at his teachings. The officers who returned on a failed assignment to arrest Jesus explained, "No one ever spoke like this man!"

Jesus exuded deity and sinless perfection from every fiber of his being, but he was also fully human. Understanding both aspects of his nature is critical to understanding who he is and what he did for us. But you won't fully grasp this unless you read the Bible for yourself.

Sadly, some people are intimidated by the Bible or don't know where to begin. That is where books about the Bible can be helpful. They are no substitute for the real thing, but they sometimes help ready people for the Word.

My book is a primer on the Gospels designed to inspire reluctant readers to read these four books for themselves and to help others learn more about them and dig deeper into them.

It includes two sections, the first -- chapters 1 through 4 -- being an introduction to the Gospels. In addition to looking at the basics of the Gospels in this section, I explore the history of the Promised Land during the 400 years between the end of the Old Testament period and Christ's birth. The Jewish people had been released from captivity and returned to their land and were trying to restore their relationship with God while a succession of foreign empires dominated them and controlled the land. I also examine the providential confluence of events that made this the perfect time for Jesus to enter into human history and for the spread of the Gospel message. The Roman Empire brought relative peace to the land, and its roads facilitated travel. The Greek language and culture permeated all the lands of the empire.

In the second and main section of the book -- chapters 5 through 12 -- I combine the Gospels into a unified, roughly chronological account. I don't try to harmonize the four books, which I consider a fool's errand, because it is not really feasible to do that. But I do believe it is helpful to consolidate them in a work such as this for the limited purpose of exposing readers to all the events recorded in the Gospels.

So I have tried to include every event that occurred and every teaching Jesus imparted, providing commentary along with each event, trying to give readers more insight into Jesus' words and deeds.

I have sometimes paraphrased for space purposes, always careful to stay true to the text, but I have included most of Jesus' words verbatim. Please believe me that my purpose was not to tinker with God's Word, which cannot be improved upon, but to expose readers to the entirety of the Gospels, help accelerate their learning curve and, most of all, inspire them to delve into the Gospels themselves.

My prayer is that by reading this book, you will acquire or reacquire a passion for the Gospels and for Jesus Christ, learn more about him, and resolve to study the Gospels on your own. Though they can mostly be understood even by children, there is no end to their depth of riches and their ability to transform our lives.