Trump Created an Opening; He'd Better Drive Through It

David Limbaugh
|
Posted: Sep 02, 2016 12:01 AM
Share   Tweet
The opinions expressed by columnists are their own and do not necessarily represent the views of Townhall.com. 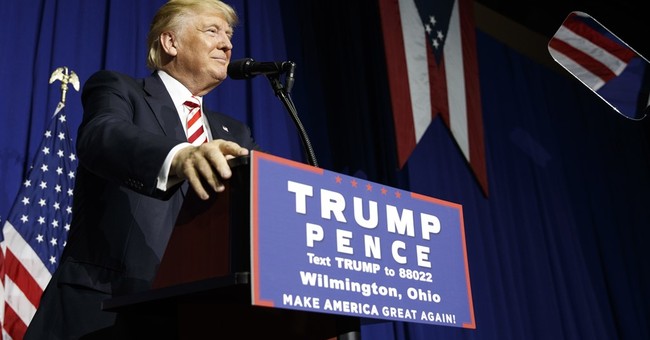 Trending
The stars are finally aligning for a significant shift toward Donald Trump in this presidential campaign. Hillary Clinton is rightfully under siege. The polls have already narrowed, and Trump hit home runs -- at least triples -- in Mexico City and Phoenix.

Each day brings news of another real Clinton scandal -- or more information on those already in progress -- cumulatively cementing the public's perception that the Clintons are unrivaled among untrustworthy, bloodsucking politicians.

On top of all the other Hillary Clinton email bombshells, we've learned that she continued to send classified information from her personal email account after leaving the State Department -- just more evidence of her brazenness and her unmitigated arrogance.

If this weren't enough, the State Department revealed that it has found some 30 emails from Clinton's account that concern the Benghazi, Libya, attacks. They were part of the 15,000 emails forensically retrieved by the FBI, despite Clinton's scheme to permanently erase them. Further, the FBI will release some of the documents from its investigation within the next few days.

Clinton's very bad week didn't just involve her robust email scandal. It was also reported that Bill Clinton's staff shamelessly milked a federal government program -- designed to assist former presidents with legitimate post-presidential expenses -- to subsidize the Clinton Foundation and an associated business. The Clintons -- you know, the ones who are all about ending income inequality and fighting class privilege -- abused the program to use taxpayer dollars to buy computer equipment housed at the Clinton Foundation and to supplement the compensation and benefits of aides.

Additionally, several recent polls show Clinton's lead dwindling, both nationally and in several swing states. A Monmouth University poll has her lead among likely voters shrinking to 7 percent, a 5-point drop from her 12-point lead in the August poll.

A Fox News poll shows the gap narrowing to just 2 points, with Clinton at 41 percent and Trump at 39 percent, in a four-way race. And three polls in the battleground states of Ohio, Pennsylvania and Michigan show Trump greatly tightening the gap.

Nor does Hillary Clinton's bad news end with her own scandals and dwindling polls. Trump, it can be safely said, had, for him, an extraordinarily positive week -- most of which occurred after these latest polls.

No sooner had he apparently flipped on his signature immigration issue than he doubly redeemed himself with a risky but successful trip to Mexico and a forceful and clarifying speech in Phoenix to allay fears that he had unacceptably softened his position.

By going to Mexico for a one-on-one meeting with Mexican President Enrique Pena Nieto, Trump demonstrated that he can be gracious, diplomatic and, most importantly, presidential. He must finally be listening to his advisers -- my guess is that Kellyanne Conway is having an enormous impact -- and at least sometimes be curbing his insatiable appetite to speak without a filter.

Trump managed to capitalize on America and Mexico's mutual interests on the knotty immigration issue and to reinforce his commitment to secure our border and stop illegal immigration without alienating the Mexican president. He also found common ground in suggesting they work together in fighting the drug cartels and improving NAFTA.

Whether or not it was primarily a photo-op, Trump accomplished a great deal in a few short hours, especially in showing he can be a firm but good neighbor. Though he soft-pedaled some of his hard-line positions on immigration, he wisely shored them up with his base in his follow-up speech in Phoenix.

There seems to be a consensus on the right that Trump scored big with his Phoenix speech, and that's saying something, seeing as fervent never-Trumpers on the right usually find little to like in Trump. Here again, it appears that Trump is capable of pivoting in the right direction and of paying attention to his advisers instead of allowing his instincts toward excessive self-indulgence to dominate.

Yes, he has undeniably flipped on his deportation position, which many warned would have been untenable. But he delivered a full-throated, unapologetic defense of American sovereignty and of his philosophy that our immigration policy should be geared toward the best interests of the United States and its citizens and not toward "the needs of the 11 million illegal immigrants" in the United States. He said, in direct contradiction to the Democratic (and, frankly, the establishment Republican) position: "There is only one core issue in the immigration debate, and that issue is the well-being of the American people. Nothing even comes a close second. ... We will treat everyone living or residing in our country with great dignity. So important. We will be fair, just and compassionate to all. But our greatest compassion must be for our American citizens."

Amen to that. This is Trump at his best -- fiercely taking on political correctness without fear of media backlash. He would be well-advised to continue in this posture on this and other issues the American people care about, without getting sidetracked in Twitter wars or otherwise sniping at his critics.

I have no illusions that Trump has achieved a dramatic makeover, and I haven't suddenly become a Trump apologist, but I feel strongly that we must defeat Clinton, and I'll credit him when he moves in the right direction.

The events of the past week show that the election can be Trump's for the taking if he'll just discipline himself to stay on message and resist his inclination toward pettiness. He must build on his progress this past week, proving to the people he would be mature in the White House and making them feel comfortable with him enough not to vote for the despicable Hillary Clinton.