Establishment Republicans Must Be Careful Not to Go Too Far 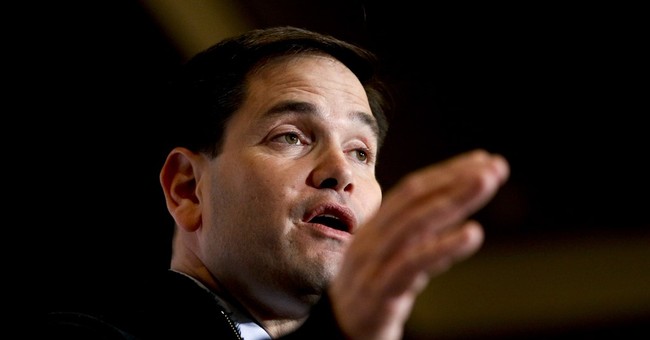 I've long said that the differences between so-called establishment Republicans and grassroots conservatives are about more than tactics in budgetary battles with President Obama and congressional Democrats. The current Cruz-Rubio flap validates my position.

Establishment Republicans have been enormously frustrated with the grassroots for wanting to call Obama's bluff in these budget battles to the point of allowing the government to shut down. They have maintained this is a fool's errand that will only help Democrats because shutdowns will always be blamed on the GOP, supposedly the party of limited government.

The establishment has been particularly derisive of Ted Cruz -- one of the leading senators fighting to call Obama's bluff -- arguing he has pursued quixotic positions designed not to prevail legislatively but to grandstand and serve his own political ambitions.

I disagree with that assessment of Cruz, who I believe has acted on principle and to honor his campaign promises. The establishment tends to see these legislative battles as a zero-sum game, thinking that unless you can be almost assured of prevailing in your legislative goals, it is counterproductive to fight Obama to the point of a government shutdown because that will inevitably result in voters punishing the GOP in the next election -- no matter when that election is.

I reject that analysis. If establishment Republicans would ever unite with Cruz and the grassroots in opposing Obama publicly and vehemently instead of telegraphing their intention to surrender from the outset, the GOP might have a better chance of stopping Obama. If they didn't concede defeat in advance by saying it is impossible for the GOP to win a public relations battle with Obama over a government shutdown no matter how unreasonable Obama's position is, the GOP might -- just might -- be able to convince the public.

Why do establishment types automatically assume they will lose a PR war with Obama even when he is obviously the extremist in these budget battles, at a time when we are more than $18 trillion in debt, terrorists are at our doorstep and Obama is off globally evangelizing for the earth goddess Gaia? Doesn't it say something about these Republicans' lack of confidence in conservative ideas that they are never willing to entrust the voters to back them? Many of them demonstrate this same lack of confidence in selling conservative ideas when they repeatedly urge the party to tack to the middle in national elections to win moderate voters instead of passionately articulating Reagan conservatism and energizing (and expanding) the base.

I hear the same fecklessness from my establishment friends in the context of the Cruz-Rubio contest when they tell us that Cruz is too extreme and that of the two, only Rubio could defeat Hillary Clinton. Nonsense. Establishment types said the same thing about Ronald Reagan -- and overall, things are worse now than they were even under Jimmy Carter.

I agree that there is far too much animosity from both sides in these GOP intramural conflicts and that we should all more strongly resist the urge to impugn the other side or its motives. But we must recognize that we have serious, though not insurmountable, differences.

We do need each other in presidential elections, so we'd better be careful not to burn too many bridges. But from my perspective as a grassroots conservative, I must say that I don't believe the establishment has its ear to the ground; it is not hearing the American people, who are neither crazy nor extreme.

This is why establishment Republicans don't really understand Donald Trump's appeal. It's not because Trump supporters are politically unsophisticated. It's that they don't believe that seasoned Beltway politicians -- the ones with all this vaunted experience -- understand or care about the level of fear, angst, disgust, concern and outrage that ordinary Americans are feeling over the ongoing destruction of our nation. The establishment doesn't grasp the frustration of Americans who are sick of being told "no" and given all kinds of reasons -- from many Republicans, no less -- that we can't do anything to stop Obama. Establishment types don't understand why Trump supporters are not turned off by Trump for not being more refined and nuanced in his proposals rather than simply saying, "We need to kill the terrorists, and you guys keep telling us why we can't."

Grassroots Americans have had it, and they are fighting back. Nevertheless, I will support any establishment candidate if he ultimately wins the GOP nomination. Will the establishment support Cruz if he wins the nomination?

Let's vigorously fight for our respective candidates, but let's not destroy each other in the process, because we will need each other to defeat Clinton and save this nation.