It Depends on What the Meaning of 'Crazies' Is 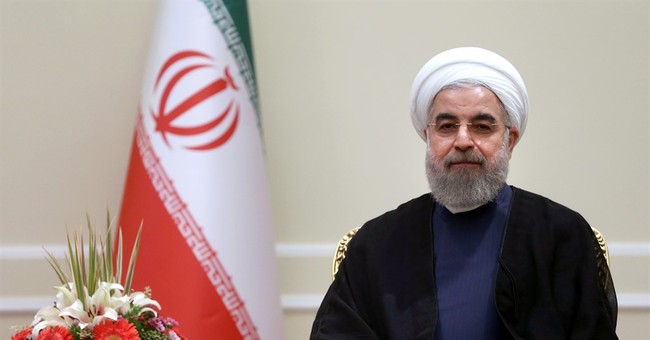 Trending
Yeah, I get President Obama's point. He wants to disarm law-abiding Americans but entrust the Iranian Islamist theocracy to police itself on nuclear arms and subsidize its funding of global terrorism. But we're the "crazies."

Recently, Obama dissed opponents of his Iran nuclear deal for "making common cause" with Iranian hard-liners who chant "death to America," and now he's calling us crazy. But he's the one playing footsie with those America haters. Projection is a beautiful thing.

It gets old pointing out that Obama uses Saul Alinsky tactics to demonize conservatives and avoid defending his positions, but it's true.

Instead of explaining why we're wrong, he calls us nuts. So most U.S. representatives, Sen. Chuck Schumer -- a stalwart Obama supporter -- and roughly half of Americans are all whack jobs? Are the 69 percent of Israelis against the deal lunatics, the 21 percent undecided flirting with lunacy and only the 10 percent in favor rational?

Instead of accusing us of being crazy and making common cause with the hard-liners, perhaps Obama should explain why he is doing their bidding.

The administration originally assured us that the United States would be able to have "anywhere, anytime inspections" of Iran's nuclear facilities, but then we learned that "anywhere" meant limited locations, that "anytime" meant giving Iran 24 days' lead time to hide its weapons and that the "United States" meant entities other than the United States. He is essentially leaving compliance up to the Iranians and their international sympathizers, because we won't be allowed to participate in the site inspections.

This means we are relying on their good faith. Folks, this is a regime that has a long history of nuclear violations, that remains openly committed to the destruction of Israel and America, and that sponsors proxy wars throughout the Middle East. Our "sane" president offered these murderers a $150 billion signing bonus for a deal that is great for them and terrible for us. The hyper-rational Obama didn't require the mullahs to come clean on their past illegal nuclear activities prior to the deal's going into effect. And he didn't try to get our four hostages released, saying it would muddy the deal, even though he released a top Iranian scientist in the process.

Every day, we discover more reasons to oppose the deal. The White House guaranteed that if Iran violates the agreement, the sanctions will snap back into place, but it concealed a major loophole in that provision: The deal grants Iran a basis to exclude from snapback sanctions long-term sales of Iranian oil and gas and almost all nonnuclear items. According to The Weekly Standard, once the deal is in place and the sanctions are lifted, Iran "could launch long-term (say 20 year) contracts to sell to 'any party' -- including Chinese, Russian, Lebanese or other parties friendly to Iran -- all the oil or gas, for example, that Iran chooses in the future to sell."

Do you realize that this deal that only crazies oppose allows the hard-liners to produce intercontinental ballistic missiles to their darkened hearts' content? That it permits them to keep their vast nuclear infrastructure? That it will most likely lead to a nuclear arms race in the Middle East that could include Turkey, Egypt and Saudi Arabia?

Though Obama acts as if he can alter reality by making declarations at odds with it, our failure to approve this deal would not mean war. Rather, the deal itself increases the risk of conflict and war.

Robert Joseph, former undersecretary of state for arms control and international security, poses five questions to gauge whether this is a wise deal for the U.S.: 1) Does it deny Iran a nuclear weapons capability -- the long-standing declared goal of the U.S. and the international community? 2) Does it, after the constraints expire, prevent Iran from building a nuclear weapon in a short period of time? 3) Does it meaningfully extend the breakout time? 4) Is it effectively verifiable? 5) Is there a meaningful phased relief of sanctions, and are there guaranteed snapback provisions? The answer to each of those questions, says Joseph, is no.

Have you ever heard the phrase "shifting the goal posts" to describe the dishonorable negotiating tactic of changing one's demands midstream? Well, at least you can understand the logic in the other side's doing so to get a better deal. But the opposite is occurring here. Inexplicably, Obama keeps changing the terms to get a worse deal for the United States. Indeed, former senior officials who helped frame the administration's policy on Iran's nuclear capacity issued a public statement warning that the deal "may fall short of meeting the administration's own standard of a 'good' agreement."

Isn't that great? Obama moved the goal posts, all right, but he moved them toward the Iranian regime. Now if that isn't crazy and lurching toward common cause with the bad guys, I'm not a bitter clinger.

David Limbaugh is a writer, author and attorney. His latest book is "Jesus on Trial: A Lawyer Affirms the Truth of the Gospel." Follow him on Twitter @davidlimbaugh and his website at www.davidlimbaugh.com. To read features by other Creators Syndicate writers and cartoonists, visit the Creators Syndicate Web page at www.creators.com.