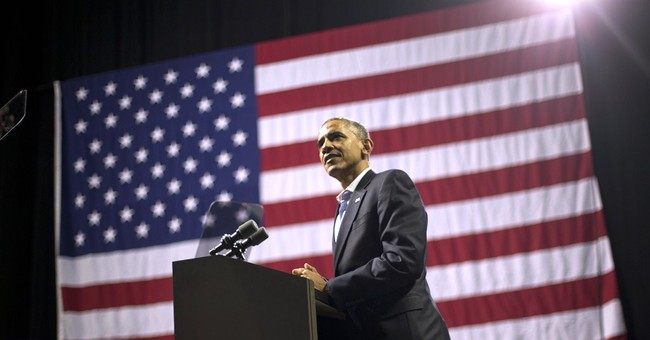 Democrats have continued to stoke their phony "war on women" issue and racial politics this election cycle because it's all they've got. President Obama's domestic policy and foreign policy are in shambles, and they know it.

In the most recent two national elections (2010, 2012), Democrats used the race and gender cards, to be sure, but they talked up the economy and health care more than they're doing now. They completely distorted those issues, but today they must have discovered that their propaganda just won't prevail against the brutal realities people are experiencing.

Some pundits have suggested that Democrats, given the grim outlook that faces them in the elections, are regretting the fact that they didn't talk about new economic proposals instead of putting most of their eggs in the identity politics basket.

But there would have been a major downside to their adopting that strategy. It would have shone a bright light on failed policies they've wholeheartedly supported for the past six years. If your party has been in power, you can't propose a whole new set of solutions without conceding that yours have failed.

Democrats rarely, if ever, admit that their policies haven't worked, and President Obama never admits it. They either sanitize the record or blame Republicans. In fact, to listen to Obama tell the story, you would assume we're in a period of robust growth. He'll tout the fall in the nominal unemployment numbers without ever acknowledging that the labor participation rate is the lowest it's been since the 1970s. People say numbers don't lie, but the unemployment numbers alone do. Unfortunately for Obama, unemployed people know they don't have jobs.

The same is true with health care. Obama can spin it however he wants to, but people know that their premiums are going up, that they're losing their plans and doctors, that the White House has been dishonest about all aspects of Obamacare, and that the administration has made a colossal mess of rolling it out and administering it. It's one thing for Obama to entice people with grandiose promises. It's another for him to convince them that he has fulfilled already-broken promises.

Putting aside the disastrous mess Obama has made of foreign policy and the war on terror, just look at what is happening with the economy. Personal spending has been falling instead of rising; child poverty is at the highest point it's been in two decades; the so-called "job vacancy rate," according to Harvard economics professor Greg Mankiw, is back to the pre-crisis level; and even a recent relatively optimistic report on the gross domestic product may have been misleading because of a statistical error in Obama's favor.

Democratic candidates are doing their best to steer clear of Obama, but I don't think many of them want to go so far as to specifically condemn his economic record, because most voters know they've enabled him every step of the way. And Obama himself would never agree to unveil a new set of economic or health care policies, because he is congenitally incapable of admitting mistakes and changing his course.

If you need historical proof of this, just review his successive State of the Union speeches and you'll discover they are all virtually recycled bullet points, as if he is completely unaware he's repeating himself or that we are. If you need more proof of Obama's ideological and policy incorrigibility, be aware that his housing policies are frightfully consistent with those that led to the financial collapse of 2008.

University of Georgia economics professor Jeffrey Dorfman writes that the housing market meltdown was "completely avoidable." It was the direct result of "the incentives in the industry and the involvement of the government." That is, the mortgage originators and bundlers were not concerned about ensuring that the loans would be repaid, because they made their money on increasing the number of mortgages and the amounts to be paid. Despite all the finger wagging from this administration and all the statutory and regulatory changes implemented ostensibly to prevent a repeat of this debacle, the same conditions are happening all over again. The administration has pursued its political agenda of maximizing homeownership, especially among minorities and the poor, and placed politics above economics and common sense. It's what happens when you have a president who is all about rhetoric and unaccountable for the results of his policies.

Well, all that could be changing this time around. Although Obama is not personally on the ballot, everyone knows, including Obama himself and the Democratic candidates who have been sprinting away from him as fast as they can, his policies are on the ballot.

If 2012 had been more a referendum on Obama's policies than a host of deceptions and illusions, he wouldn't have been re-elected. But as more people have awakened from their slumber and apathy, Obama's long coattails are tainting his entire party and many of its candidates.

So Democrats can lament their underemphasis on economic solutions, but in the end, even Obama's propaganda has a finite shelf life. Keep your fingers crossed for some substantial relief Tuesday evening.