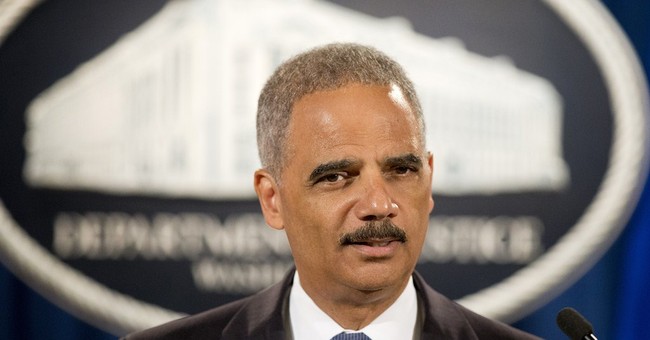 Eric Holder has announced his resignation from his position as U.S. attorney general after almost six years of turning the Justice Department into a partisan political vehicle instead of a law enforcement institution.

It's too early to tell as of this writing what prompted his resignation. One would like to think his legacy of scandals and corruption finally caught up to him, but we have no reasonable expectation that this is the case, given this administration's agility at escaping accountability for any and all wrongdoing.

No, I doubt it's his malfeasance in connection with the Fast and Furious gunrunning scandal, his obstruction of the congressional investigation into the Internal Revenue Service scandal or any other of a number of legitimate reasons warranting his repentance and resignation.

Republicans and other lovers of the rule of law also have little reason for optimism as to the character of Holder's eventual successor, for anyone President Obama selects will doubtlessly be of the same bent -- strong on partisan politics and weak on justice.

During their tenure, both Holder and Obama have also used the Justice Department as a vehicle to promote racial grievances, and they've made no secret of their obsession. It's hard to miss that they both view the United States justice system as deeply tainted by institutional racism.

They would have us believe that the system routinely and habitually discriminates against blacks and that law enforcement officials throughout the nation target blacks across the board, from traffic stops to drug charges to criminal assault and other violent crimes.

America gets no points from this grievance industry for having elected an African-American president. Holder announced early on in Obama's term that Americans are cowards on the issue of race. Obama himself has publicly shown his race-consciousness on numerous occasions, from the Henry Gates affair ("police acted stupidly"/White House beer summit) to the Trayvon Martin affair ("If I had a son, he'd look like Trayvon").

Obama has taken his grievances to international bodies, complaining to the United Nations as if he were an advocate against the nation he is charged to lead. He has complained that we have had a poor record on civil rights -- telling this, no less, to nations that wouldn't know civil rights if it were tattooed on all their officials' faces.

Just this week, Obama did it again, while acknowledging U.S. shortcomings during his speech to the United Nations. He exhorted nations and religions to reject violent extremism among their populations.

He said, "I realize that America's critics will be quick to point out that at times, we, too, have failed to live up to our ideals, that America has plenty of problems within our own borders." America's critics, he might have noted, take no back seat to him in criticizing America.

He continued: "This is true. In a summer marked by instability in the Middle East and eastern Europe, I know the world also took notice of the small American city of Ferguson, Missouri -- where a young man was killed and a community was divided."

Instead of using their respective bully pulpits to dismiss unfair charges of white-on-black racism and the narrative that police officers are on a crusade against blacks, Obama and Holder miss no opportunity to promote these destructive perceptions.

The severe damage to race relations in America that these two men have inflicted is not the only negative consequence of their coordinated vendetta. They have deeply wounded the reputation of police officers throughout the United States. By suggesting that American cops scapegoat and abuse blacks, they are sending a terrible signal to our youth today, and not just our black youth, whose concerns about racial mistreatment by police officers they've validated.

They have also poisoned the well for all children concerning their attitude and trust toward law enforcement officials, which has done immeasurable harm to our stability as a society -- not to mention how disgracefully unfair it is to the large majority of people who serve honorably in these positions.

I spoke to an assembly of elementary-school children a few weeks ago during Constitution Day, and the theme I emphasized was America's unique freedom tradition guaranteed by our Constitution and protected by our armed forces and law enforcement officials.

I spoke against the politically correct narrative, telling these impressionable children that they should appreciate and respect our service members and our law enforcement officers. I told them that policemen are their friends, as long as they are obeying the law, and not to believe the constant criticism against them suggesting they are our enemies.

One teacher emailed me later in appreciation, saying that one of her students returned to the classroom saying something to the effect of: "Police officers are my friends. I didn't realize that before."

I am not patting myself on the back for my simple words, but I am saying that it's time that we all do what we can to reverse the egregious narrative cultivated by too many people in this administration and elsewhere that cops are our enemy. Shame on anyone who spreads such slander, even if some individuals in their ranks are bad apples.

The Obama-Holder legacy in these areas -- pitting races against one another and citizens against their government protectors -- has been regrettable, and we should all do what we can to reverse it on our own.

God bless our law enforcement officials and our armed forces.