Has the Right Lost Its Will to Fight? 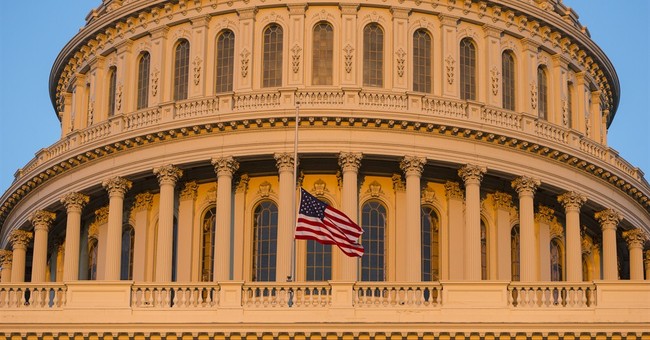 Trending
I don't think Congress should begin impeachment proceedings against President Obama right now, but I also don't think that considering the idea is "crazy talk."

The man has, in my view and that of many others, committed multitudinous impeachable offenses, and we need to strenuously object and bring it to the public's attention every chance we get. The idea of turning our heads and looking the other way is repugnant.

Yes, the elections are too close for Republicans to risk impeachment proceedings at this point, unless it became clear that the majority of Americans have the political will for that action -- as Andy McCarthy eloquently explains in his book "Faithless Execution."

But my concern is that many of those who are so dismissive of impeachment are the same ones who always argue caution in opposing Obama. They tend to throw in the towel before the fights even begin, scared of their shadow and forever banking on that next election.

Though it may not be the opportune time for impeachment, I am very concerned about what Obama's unchecked usurpations of power have done to the balance of power in the federal government and the overall integrity of the Constitution and the rule of law. Seeing as we have not taken any formal action against this president for his egregious transgressions, what will the next president be allowed to do on his own should he choose to operate outside his authority to the same extent Obama has?

But to me, impeachment really isn't the issue when it comes to the various factions within the Republican Party and the conservative movement. I have long contended that the differences between tea party conservatives and the so-called establishment are far deeper than "tactics"; they also involve policy disagreements.

On that point, let me ask you to consider what will happen if Republicans do end up with control of both the House and the Senate. What will the prudent and cautious advocate then? Will they say not to oppose Obama too much for fear that he'd successfully demonize Republicans as partisan saboteurs and ensure the election of a Democrat as president in 2016?

Let's go further. Let's say Republicans then win the presidency and retain control of Congress in 2016. Then what?

I would wager that many of my establishment friends will continue to advise restraint, urging us not to drastically roll back Obama's liberal policies, either because they'll be horrified about the next election or because they have really, in the end, lost their stomach for political battle and their taste for free market principles.

I suspect that many of them have come to accept a large, "energetic' federal government and believe that Republicans should just accept it and instead devise original and creative yet "conservative" policy solutions within the big-government framework. In other words, we should throw in the towel on our founding principles, accept the liberal narrative that Reagan conservatism is extremism, and do the best we can within the new paradigm.

I certainly hope I'm overstating the case, but I've seen how timidly Republicans have operated on domestic and social issues when in power, and I've read the commentary of many establishment-oriented pundits about "compassionate conservatism" and similar tautologies.

Conservatives have been warning for years about the unchecked explosion of entitlements, runaway deficits and debt, the destructiveness of the welfare state, the enormous problems with federal control of education, the evils of socialized medicine, the growth-smothering effects of federal taxing and spending policies, the freedom-smothering metastasis of the federal regulatory leviathan, and the danger to the republic from unchecked, rampant illegal immigration.

Will Republicans, if they regain power of both political branches, have the political will to begin to unravel the nightmares caused by an abandonment of our founding principles, or will they just nibble around the edges with insignificant modifications because they no longer believe in either conservative principles or their ability to convince the people that our ideas are still superior?

Well, I'm not among those convinced, and I don't believe that the majority of the American people are, either. But I do think that we need leaders who will articulate conservative ideas unapologetically and that conservatives need to engage in the culture war and try to make progress toward reversing this illusion that limited government, capitalism and traditional morality are wrongheaded and extreme.

I just want us to get back in the fight. We face a tireless, relentless foe in liberalism, and if we're not up to the challenge, we might as well kiss America goodbye, irrespective of whether we win or lose the next few elections.

But I am praying -- and choose to believe -- that we can and will turn this around because our ideas are superior and the majority of people still instinctively understand that. But we need to begin acting and talking as though we believe it.