No, Mr. Holder, This Has Nothing to Do With Race 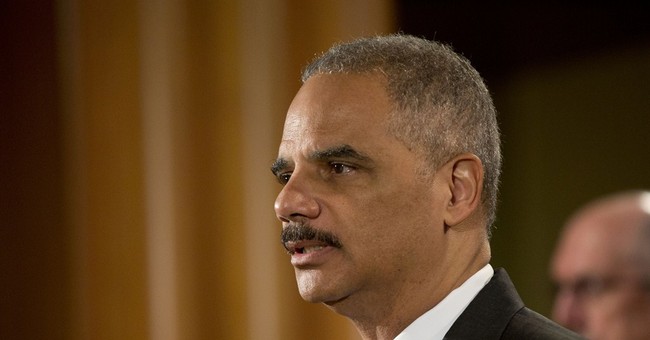 Trending
Attorney General Eric Holder once again played the race card -- this time on national television, in an interview on ABC's "This Week," claiming that he and President Obama have been targets of "a racial animus" by some of the administration's political opponents.

"There's a certain level of vehemence, it seems to me, that's directed at me (and) directed at the president," said Holder. "You know, people talk about taking their country back. ... There's a certain racial component to this for some people. I don't think this is the thing that is a main driver, but for some, there's a racial animus." Reminded of his comments during Obama's first year as president that the U.S. is a "nation of cowards" on race, he refused to back down.

At this point, I don't know whether we're seeing the outworking of the gigantic racial chips on Holder's and Obama's shoulders or we're seeing just another despicable example of the two engaging in community organizing by branding their political opponents as racists.

These two have continually engaged in the politics of division, alienating Americans against one another on the basis of race, gender, age, religion, geography, income and every other conceivably exploitable category. By portraying themselves as victims and conservatives as bigots, they seek to intimidate conservatives from pursuing their agenda, divert attention from their own policy failures and keep the pot stirred on imaginary problems as cover to advance the remainder of their unpopular statist agenda.

Sorry, Mr. Holder, but it seems that we talk about race all the time and that you and President Obama just won't let it go. If there is cowardice on this issue, it's from those who refuse to let their actions speak for themselves and insist on injecting false allegations of racism into the mix to vilify opponents and avoid a discussion on serious issues.

These accusations are irresponsible and destructive to the national fabric. It is a great disservice to minorities, non-minorities and the national interest if we can't discuss the damaging effects of President Obama's policy agenda without fear of being accused of one of the most reputation-shattering offenses that exist.

When we talk about taking America back, we mean that quite literally. Though I can't formally speak for others, I can tell you that millions of people correctly believe (based on Obama's promises to fundamentally transform America, his partial fulfillment of that promise and his obsession with completing its fulfillment) that America is in a rapid, dangerous decline -- a decline that must be reversed, lest America be forever changed into something the Founding Fathers never envisioned.

President Obama openly derides the notion of American exceptionalism. He has constantly apologized for America's alleged transgressions. He "writes us up" before the United Nations, complaining to Third World anti-American, civil-rights-abusing nations that we are the ones who have an egregious record on civil rights.

Under his administration, we are witnessing the deliberate decline of our military and defense capabilities at the precise time that his policies are empowering global terrorism and Middle Eastern unrest and making a stronger, not weaker, military more imperative.

He is undermining Israel, our main ally in the region, impairing Israel's essential effort to rally international support for its right to defend itself against unprovoked Islamic violence and aggression.

He is orchestrating the false narrative of a Republican war on women, which is based on a series of lies and distortions so preposterous that it would be dismissed outright if someone in his position were not fueling it. The only war being waged on this issue is by his administration, and it's a war against the religious freedom and conscience of Christians.

He is also waging war against the American dream, discouraging self-reliance and promoting government dependency and the metastatic expansion of the welfare state, which is deeply harming the people it purports to assist. No nation, even America, can remain great if people are encouraged to see themselves as victims, to shun industriousness and to blame others for their plight.

Under his rule, more people are out of work than ever before in our history, and his economic policies -- because they are anti-business, anti-capitalism and punitive of success -- are making matters worse.

His administration has unleashed administrative agencies, such as the Environmental Protection Agency, to further harass and harm businesses in the name of environmentalism, and he is destroying the greatest health care system in history.

The president lies to our faces with liberal media protection and impunity, on vitally important issues such as Obamacare, Benghazi, Fast and Furious, immigration, voter identification, Iraq, the Department of Veterans Affairs, guns, life, "contraception," the economy, the border invasion, the Internal Revenue Service scandal, and -- yes -- race.

Obama is presiding over the least transparent administration ever, grossly usurping legislative authority and driving this nation into guaranteed bankruptcy; it's only a matter of time.

Yes, we must take the country back before it's irretrievably lost. But what worries me more than Obama, Holder and the rest of this administration is that Americans re-elected him and far too few fully realize the danger his policies pose to our prosperity and our liberty.

No, Mr. Holder, we conservatives do not talk in code. This isn't about race; it's about restoring the American dream. We genuinely pray that we can take our country back and begin the long road to healing and reigniting America's most exceptional greatness.