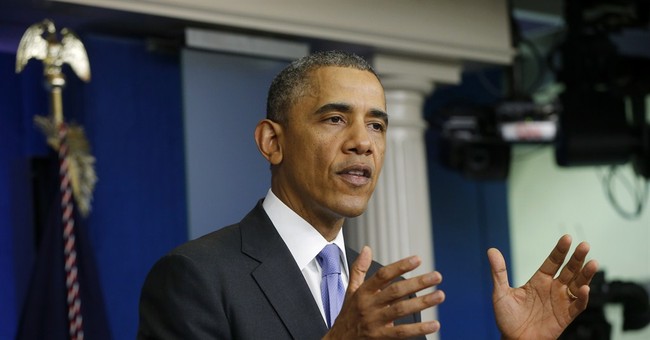 The wheels are coming off the bulldozer that is the Obama administration. But that's not a particularly new development. What's new is that some Democrats and liberal media figures are beginning to speak out.

These groups previously have unquestioningly supported Obama. They've gone to astonishing lengths to protect him and conspired with him to deceive the American people in covering up and evading accountability for his multitudinous scandals and his rampant incompetence -- all because liberals subscribe to an end-justifies-the-means philosophy of politics and governance.

But is it conceivable that with the outrageously egregious Department of Veterans Affairs scandal, Obama's chickens are finally coming home to roost?

I don't expect any mass exodus from Obamaland by Democrats or the media, but it's significant that some Democrats have expressed their outrage over this scandal and that one Democratic congressman, David Scott, voiced his disappointment with Obama for his lack of urgency on it.

In addition, National Journal's Ron Fournier sharply criticized Obama over this story, calling his view on the scandal "pathetic" and pointing out that Obama was aware of this scandal when he took office. But "what did he do, like he's done with a lot of other things?" asked Fournier. "He didn't pay attention. He didn't govern. And now he's holding nobody accountable."

It's amazing more of them, despite their dogmatic religion of liberalism, haven't broken ranks before, what with Obama's embarrassing job performance and his perpetual indifference to not only the plight of people his policies are injuring but also scandals happening under his nose (and some, perhaps, at his direction).

As a quintessential liberal, Obama will probably always get a pass from liberals for his lack of real human compassion and his manifest disconnectedness, because they judge people not by the content of their character -- or even their accomplishments -- but by their professed allegiance to liberalism's doctrines.

But even some of them have to be irritated at Obama's insistence on insulting our intelligence time after time, especially concerning allegations of wrongdoing in his administration. You've heard and watched the audio and video clips. Obama says the same thing every time. "I didn't know about this before any of you did. I am so outraged I can hardly play golf." He never follows up or holds anyone accountable.

The inescapable truth is he jealously guards against the disciplining of anyone in his administration, because it could reflect badly on him. More importantly, he simply doesn't want to be bothered with the nitty-gritty of governing.

We've known it for years, but now more are starting to notice: He wants the glory and the credit for successes that happen to occur under his watch -- if you can call them successes. He is great at barking orders on big issues. But he is annoyed if he has to spend his valuable recreation time getting his hands dirty doing his job.

Obama's alter ego and chief sycophant, Valerie Jarrett, famously observed that the duties of the office of the presidency are beneath Obama. They bore him. He is superior. He needs greater challenges.

Obama is bored, all right. But his boredom isn't from any towering intellect. It's from lack of interest beyond the big-ticket items.

In fact, Obama is more boring than bored. He loves telling us how much he cares. He savors scolding us because we don't care so much. He craves community organizing. He delights in giving speeches. He acts as if he cares when everyone is looking. But when the cameras are off, he is disengaged and often AWOL.

This is largely because he has no depth. He has only one template for every situation. On every policy issue, he says the same thing over and over. On every scandal, he gives the same response. He delivers the same State of the Union speech year after year. He advocates the same programs time after time -- whether they've already been implemented and failed or they've been rejected.

Obama definitely cares about quarterbacking and effectuating the fundamental transformation of America. Indeed, through sheer determination to remake this nation in his image, Obama has succeeded in blazing a path of total destruction to America, its institutions, its prosperity, its financial stability, its power and influence, its liberty, and much of the progress it was making toward promoting harmony among its many diverse peoples.

But even many of the people who share Obama's disturbing goals -- growing the federal government and its regulatory bureaucracy, undermining the free market system, expanding government dependency, sabotaging America's energy producers in deference to hyped-up environmental hysteria, redistributing wealth, socializing our health care system, gutting much of our Constitution, diminishing America's military power, further opening up our borders to illegal immigration, and fostering adversarial relationships between men and women, heterosexuals and homosexuals, whites and blacks, and whites and Hispanics and among people with different levels of income and wealth -- are wising up to Obama's shallowness, his hypocrisy, his narcissism and his deceit.

I suppose it's too close to the 2014 elections to expect any Democrats to fully break ranks with Obama, but it's mildly encouraging that even some of them are getting fed up with his shenanigans and speaking up about it. If his behavior is so objectionable that they're complaining about it, we are reasonable to expect an even bigger rout in November against his agenda.

That's my story, and I'm going with it.