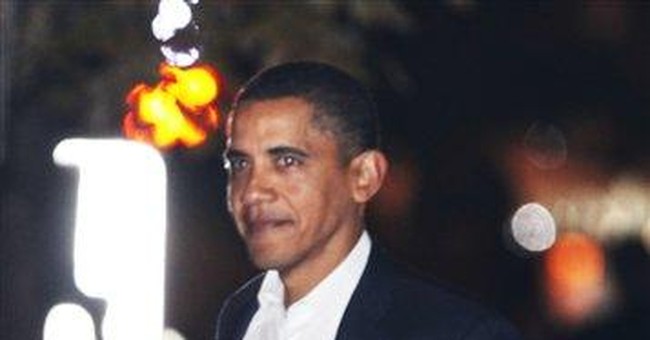 I continue to be amazed at the naiveté of people who keep giving President Barack Obama the benefit of the doubt concerning his radical appointments, saying his administration isn't doing its job in vetting the appointees. When will they wake up to the reality that Obama is deliberately picking people, such as Kevin Jennings, who share his radical values?

When prescient commentators were warning of Obama's radical friends and colleagues, such as Jeremiah Wright and William Ayers, during the campaign, his apologists diverted proper scrutiny, saying it's absurd to judge Obama by association. Even flawed cliches can work wonders when you have the entire mainstream media flacking for you.

Then when the radicalism of "green czar" Van Jones came to light, the left's reflexive reaction was that Jones was being victimized by an extremist element on the right and that the Internet itself had now been exposed as "an open sewer of untreated, unfiltered information." It was only when Jones' own extremism became too obvious to deny that the left shifted its line of defense to: Obama's team let him down by failing to vet Jones.

As I wrote at the time, "It's not Obama who didn't vet Jones, but the MSM who have never vetted Obama. Had they vetted Obama, they would have realized that he is Van Jones."

It seems that if you wait long enough, the Obama administration will get around to vindicating its legitimate critics, such as those of us who warned that Obama was insincere when he pretended that the public option was not an indispensable component of his health care scheme. (We hear that he's recently conducted a series of secret meetings with members of Congress, trying to cobble together a majority on a bill that includes the public option.)

Indeed, with his appointment of Kevin Jennings to head the Education Department's Office of Safe and Drug-Free Schools, Obama has vindicated those of us who said that the Jones selection wasn't a failure of vetting, but about Obama's appointing a like-minded radical.

Now that Jennings' radical homosexual activism has been exposed, the Obama administration hasn't said: "Oh, sorry, another one slipped through our relatively new vetting process. The president will fire him, and we'll pick someone who reflects the president's values."

The Washington Examiner's Byron York reports that Jennings seems to have the full backing of the White House. Press secretary Robert Gibbs defiantly referred Jennings' critics to the statement of Education Secretary Arne Duncan -- no centrist himself, by the way -- who stated: "Kevin Jennings has dedicated his professional career to promoting school safety. He is uniquely qualified for his job and I'm honored to have him on our team."

Well, America, are you honored to have yet another far leftist on your team and in a position to influence the education of your children, no less?

Kevin Jennings' focus hasn't been safe and drug-free schools, but gay activism, which is why Rep. Steve King of Iowa has called on President Obama to fire him. According to York, King insists that Jennings has no experience in anti-drug work and that his background has not been school safety, but promoting homosexuality in public schools, including at the elementary level.

Jennings not only ran the Gay, Lesbian and Straight Education Network but also founded it, in 1990. Sure, GLSEN purports to be primarily interested in preventing discrimination and violence against gays and lesbians in schools. But promoting homosexuality and demonizing those who don't embrace its values more fairly describes its mission. Karen Holgate of the Capitol Resource Institute put her finger on the MO of such groups when she said: "This whole movement is not about tolerance. It's about redirecting the hate towards anyone who does not agree that homosexuality is a normal, positive and healthy lifestyle."

In 2000, GLSEN, along with the Massachusetts Department of Elementary and Secondary Education, co-hosted a "Teach Out" at Tufts University, in Boston, where organizers instructed public-school teachers how to incorporate positive messages about homosexuality into their curricula. At this conference, GLSEN also led a youth workshop, "What They Didn't Tell You about Queer Sex & Sexuality in Health Class," which was advertised to "youth only, ages 14 to 21."

I'm not sure how the Obama administration will attempt to explain away Kevin Jennings' sordid associations, any more than it can rationalize his admitted failure, as a high-school teacher, to notify the parents of a 15-year-old boy who told him he had had relations with an older man, instead telling the boy, "I hope you used a condom."

How much longer can Obama partisans deny who Obama really is?