David Harsanyi
|
Posted: Nov 02, 2018 12:01 AM
Share   Tweet
The opinions expressed by columnists are their own and do not necessarily represent the views of Townhall.com. 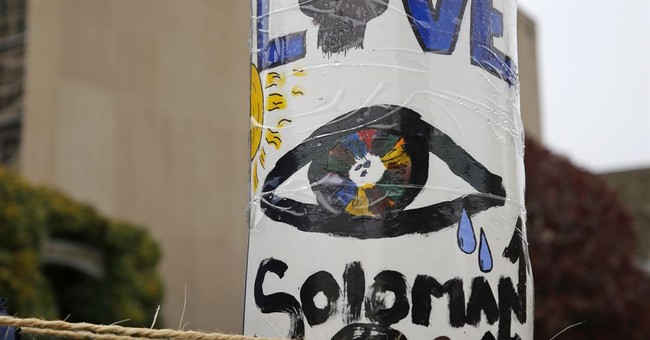 After the horrific massacre of 11 Jews at the Tree of Life synagogue, many of the same liberals who had recently fought to prop up Iran, the world's most powerful Jew-hating terror state, lectured us on the importance of combating anti-Semitism.

The same Voxers who had long rationalized, romanticized and excused the Jew-killing terror organization of the Middle East were now blaming the existence of the evil anti-Semitic Pittsburgh shooter on Republicans. The same Obama bros whose echo chamber deployed anti-Semitic dual-loyalty tropes to smear critics of the Iranian nuclear deal were warning Americans to watch their rhetoric.

There were many others, and that was bad enough. But some, such as GQ's Julia Ioffe, decided to dip into a little victim blaming, as well. Hadn't American Jews been a little too Jew-centric and pro-Israel for their own good?

Franklin Foer of The Atlantic demanded that Jews finally dispense with their faith, adopt his and start expelling co-religionists who don't share his political opinions. (If you want to read about the left's co-opting of American Judaism, I recommend Jonathan Neumann's excellent book, "To Heal the World?") "Wire" creator David Simon accused the Israeli government of intervening in the American democracy on behalf of white supremacists.

For those who confuse progressivism with Judaism -- which is to say, many -- it might be difficult to understand that undermining the Democratic Party isn't an act of anti-Semitism. In fact, the Trump administration, like it or not, has been the most pro-Jewish administration in memory.

Every Jew who's ever prayed understands the importance of Jerusalem in our faith, culture and history. It was Donald Trump, not any of the other presidents who promised the same, who recognized Jerusalem as the undisputed capital of Israel, putting an end to the fiction that it's a shared city.

It was Trump who withdrew from the Iranian nuclear deal and once again isolated the single most dangerous threat to Jewish lives in the world, the Holocaust-denying theocrats of the Islamic Republic.

It was Trump who cut more than $200 million in aid to a Palestinian government that was not only inciting terrorists (including the killer of an American Jew named Ari Fuld, but seeing as he wasn't a journalist, you may not have heard of him) but also rewarding the murderers' families.

At the same time, the liberal activist resistance wing is being led by a couple of Louis Farrakhan fangirls, and most Jewish Democrats are scared to death to say a single word in protest against the rising anti-Jewish sentiment in their own party. But that's another story.

Anti-Semitic shootings aren't new, and anti-Jewish hate crimes have long dominated religious bias in this country. This ancient hatred can be found on both fringes and runs through presidents of both parties and occurs in nations across the world under every kind of government. Yet what was the most vital lesson partisans could derive from the massacre of Jews attending a bris in Pittsburgh? Stop saying mean things about billionaire progressive sugar daddy George Soros.

As a Hungarian Jew who is a descendant of Holocaust survivors and victims, I am wholly comfortable attacking Soros, who is both a hard-left activist and a funder of the anti-Semitic divestment and sanctions movement. If you are not upset about the accusations incessantly thrown specifically at the elected Benjamin Netanyahu but you do think calling out Soros is de facto anti-Semitism, your main concern is liberalism, not the Jewish people.

If you fail to mention that Democrats have been accusing Republicans of wanting to kill the poor and young, of trying to destroy the planet, of being terrorists after every school shooting, you don't care about the temperature. If you rationalize mob behavior every time you don't get your way in the electoral process, you don't care about the temperature. And if your first instinct is to play politics with tragedy for partisan gain, you are part of the problem.