Why Aren't Liberals Celebrating Higher Gas Prices? It's What They Want

David Harsanyi
|
Posted: Jun 01, 2018 12:01 AM
Share   Tweet
The opinions expressed by columnists are their own and do not necessarily represent the views of Townhall.com. 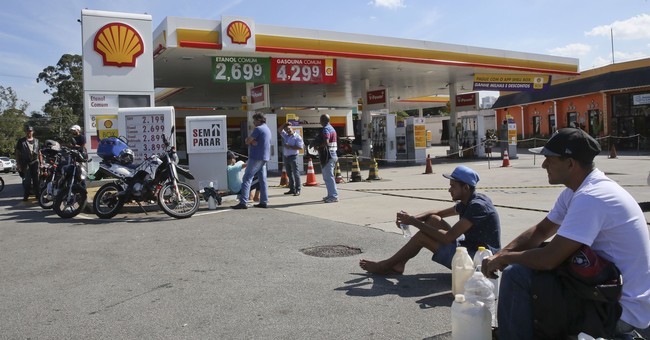 With consumer confidence at a 17-year high and economic prospects looking relatively strong, congressional Democrats have taken to grousing about the gas pump as a midterm strategy. "These higher oil prices are translating directly to soaring gas prices," declared Senate Minority Leader Chuck Schumer, "something we know disproportionately hurts middle- and lower-income people."

If this is true, then why have Democrats spent the past two decades advocating for policies that artificially spike fossil fuel prices? If higher energy costs hurt Americans -- and thank you, senator, for conceding this point -- why have liberals favored increasing gas taxes, inhibiting exploration for fossil fuels (including a ban on fracking for less environmentally damaging gas in a number of places) and capping imports? If higher gas prices disproportionately impact the working class and poor, then why do Democrats push for national schemes designed to create false demand through a fabricated marketplace?

Not a single reporter asked the Democrats who were performing at a press conference in front of an Exxon filling station the other day if higher gas prices might incentivize Americans to switch to subsidized "alternative" energy sources -- even though this happens to be the prevailing theory driving much of their energy policy. Shouldn't Democrats be celebrating the fact that fewer Americans were driving on Memorial Day? I thought we were facing an apocalyptic situation here.

Schumer conveniently blamed the United States' exiting of the Iran nuclear deal for the spike -- an agreement he supposedly opposed. Democratic Sen. Brian Schatz, a self-styled "climate hawk," claimed, "There's a straight line between Trump's policies and the price of gasoline." We can only now assume he believes the prevalence of cheap fossil fuels is imperative in the effort to alleviate poverty and create wealth. I concur. But don't worry about Iran, senator; there's plenty of oil elsewhere.

Politico maintains that Democrats have stolen a page from the "GOP playbook to attack Trump," which is true, though the difference is that Republicans generally support proposals that make gas more affordable. The Obama administration, for example, benefited greatly from a recalcitrant GOP Congress's committed obstruction of an untold number of terrible initiatives. We should recall that the energy secretary openly wrestled with ways "to boost the price of gasoline to the levels in Europe." When Obama was asked in 2008 if the $4-a-gallon gas prices at the time were beneficial for the American economy, the presidential candidate prevaricated, saying, "I think that I would have preferred a gradual adjustment."

What is the gradual adjustment Democrats prefer today? A slow and steady move to $7? Right now U.S. gas prices are only a fraction of those in European nations, and yet Democrats acted as if Trump had triggered Armageddon when he decided to leave the Paris climate agreement. Do you want us to follow Norway's lead or not?

Democrats had opposed the opening of pipeline projects, of new drilling, and allowed the Environmental Protection Agency to transform from a regulatory agency that was protecting the environment to a place where the administration could implement backdoor legislation that American voters had rejected. If Democrats hadn't lost power in 2010, we might be living with those $4 per gallon prices today.

To understand how this policy manifests, just look at California, where gas prices are consistently among the highest in the nation -- despite the fact that there are no constraining geographic or economic impediments to cheap energy. Last year, the legislature pushed through another gas tax (and an even larger one on diesel) and extra "fees" to help make one of the most regressive energy policies in the country even more onerous and expensive.

Now, obviously the entire spectacle is for show. Schumer says, "It's time for the president to buck his oil executive buddies," because lots of ignorant voters probably believe that the price of crude oil can be controlled by a few nefarious CEOs. The only question I have is: Why don't these profitmongering oligarchs keep prices high all the time?

Of course, in the real world, summertime typically brings a spike in prices -- and despite Schumer's forecast of "soaring gas prices," prices are already dropping again. Given the fungibility of commodities and the track record of the Middle East, we'll likely always have to deal with some painful fluctuations in the price of energy, regardless of what we do at home. But relying on market forces has, by every conceivable measurement, had a better track record than price controls.

So while Democrats have learned to be less open with their intentions, the policies speak for themselves. What do they plan on doing about oil prices when they win the election? Yell at some executives? Why doesn't anyone with access ask these concerned senators if they believe cheap fossil fuels is preferable? Or do they still support policies that spike energy prices on purpose?