Democrats Are Fooling Themselves About Tax Reform's Unpopularity

David Harsanyi
|
Posted: Dec 22, 2017 12:01 AM
Share   Tweet
The opinions expressed by columnists are their own and do not necessarily represent the views of Townhall.com. 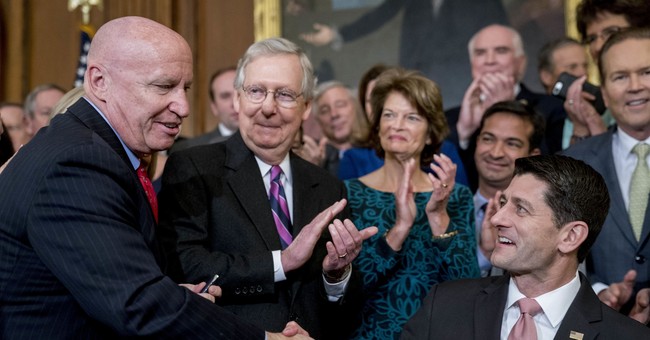 According to political analysts, 2018 Democrats will use the just-passed tax reform as a way to argue that the Republican Party is the party of the plutocracy, which is another way of saying that Democrats are going to use the same argument they've been using for the past three decades with varying degrees of success. A number of liberals have claimed that the passage of "unpopular" tax reform is historically analogous to the passage of Obamacare, which triggered the loss of hundreds of Democrat seats and, perhaps, control of the presidency.

This is wishful thinking for a number of reasons.

Yes, the tax bill is unpopular. Then again, I'm not sure you've noticed that everything Washington, D.C., tries to do is unpopular. Nothing polls well. Not the president. Not Congress. Not Democrats. Not legislation. Not even erstwhile popular vote-winning candidates. Certainly, a bill being bombarded with hysterical end-of-the-world claims that are rarely debunked by the political media is not going to be popular. Republicans won't pass anything if they wait around for things to be popular.

However -- apologies to House Minority Leader Nancy Pelosi -- they can be somewhat content knowing that voters will probably like it once they find out what's in it.

Why do so many Americans believe that the middle class is getting a tax hike? Because outlets they trust are constantly lying to them. Both in framing and content, the coverage of the tax cuts has been impressively dishonest. "One-Third of Middle Class Families Could End up Paying More Under the GOP Tax Plan" writes Time Money (they won't). An Associated Press headline reads, "House Passes First Rewrite of Nation's Tax Laws in Three Decades, Providing Steep Tax Cuts for Businesses, the Wealthy." And so on.

There will always be ideological arguments regarding the efficacy of tax cuts for corporations and the wealthy, but at some point people are going to find out that they've gotten one, too. The nonpartisan liberals at the Tax Policy Center concede that 80 percent of Americans will see a tax cut in 2018, and that the average cut will be $2,140 -- which might be something to scoff at in D.C., but I imagine a bunch of voters surprised by these savings will be less cynical. Only 4.8 percent of Americans will see a tax increase.

Like Obamacare, people don't know what's in the bill. But unlike Obamacare, the repeal of the individual insurance mandate gives millions a choice. The passage of Obamacare, after all, upended lives. The Affordable Care Act became synonymous with "health care insurance," and voters attributed everything that went wrong with that insurance to the bill. And since Democrats offered a litany of fantastical promises about the future of health care, the disapproval was well-deserved. Millions began seeing their insurance plans discontinued as soon as Obamacare was implemented, despite assurances from the president and pliant Democrats that no such thing would happen. For many, premiums in the individual markets doubled over four years of Obamacare. Voters dealt with these tangible, real-life consequences.

Whatever valid concerns there are about debt or spending (and they are valid), it is unlikely that tax cuts will have similar long-term consequences on voting as those on health care. It is more likely that tax cuts will do little to change the dynamics of the coming years. But it is plausible that because of the overreaction from the left, millions of Americans who thought they were going pay more in taxes will find a new child credit and be thankful.

As an ideological matter, every time a Democrat claims that keeping more of your own money is tantamount to "stealing" -- which happens often -- voters should remember this is fundamentally a debate between people who believe the state should have first dibs on your property and people who don't. The only way to frame the bill as a tax hike is by using the 2025 expiration of individual rate cuts. And the only way they won't be extended is if Democrats decide to raise taxes again. These are debates Republicans should embrace.

That's not to say tax reform is a panacea for Republicans. It's far from it. Historically speaking, the party in power will likely lose a bunch of seats in the 2018 midterms. But the claim, as Democrats are sure to make, that those losses are unique or tied to the toxicity of an agenda item -- particularly a tax cut, which is generally popular among Americans (when they know it exists) -- is far-fetched.