You Know What's Worse Than Overreacting to Terror? Normalizing It

David Harsanyi
|
Posted: Jun 09, 2017 12:01 AM
Share   Tweet
The opinions expressed by columnists are their own and do not necessarily represent the views of Townhall.com. 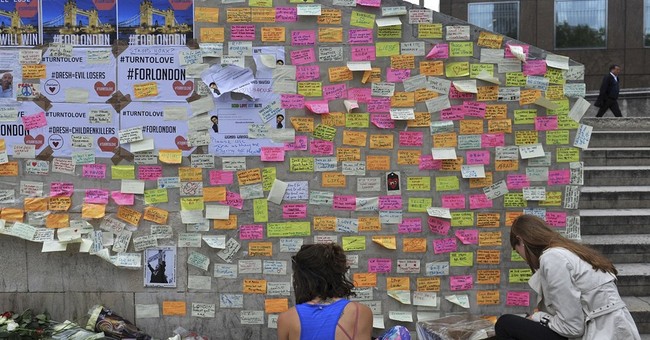 The day after Islamic terrorists struck England for the second time in a month, New York Times columnist Paul Krugman offered the prevailing liberal talking point of the day: Stop panicking. "I'm going to London later this week," he mocked on Twitter. "OMG! I might be stabbed! Or I might get hit by a drunk driver tonight, or run over by a cab tomorrow."

He might. And if any of those things were to happen, although tragic and sad, it would have little effect on the population of England -- for good reason. We are resigned to a certain level of random criminality and misfortune in Western society. In free societies, we do our best to mitigate the damage without trampling on civil rights, but it's part of modern life.

Certainly, for the victims of violence -- and their friends and family -- there's little difference. The consequences for the rest of society, though, can vastly differ. If an unarmed man were shot down by a police officer, would Krugman tell his three million followers: "Relax. You have a better chance of being run over by a taxi"? Of course not. Terrorism is about more than just risk assessment. There are broader societal implications to take into account.

Those who kill in the name of Islam are part of a unique worldwide political movement that includes, to various degrees, radicalized men and women from both great factions of the faith. They are on every continent, and they give no quarter. There is no dialoguing. There is no realistic political solution that might appease them. There is no legislative fix. Terrorism -- as well as the recruitment and propaganda tools by which terrorists survive -- is funded by Islamic regimes and the radicals in them, and applauded by adherents around the world. Every attack is about all of this.

Remember, as well, that the magnitude of the violence is alleviated only by the vigilance of the people fighting it. Comprehending the depravity of the jihadi makes people nervous in the way random criminal violence should not. Those who peddle Krugmanesque risk assessments also fail to take into consideration the number of terror plots that have been thwarted. The West spends hundreds of billions of dollars every year trying to avert another 9/11, although we obviously struggle to stop these low-tech attacks. The London metropolitan police reported, "There are 500 current terrorism investigations, involving 3,000 current subjects of interest." One of the London Bridge terrorists appeared in a documentary called "The Jihadis Next Door." This seems alarming.

Krugman went on to tweet: "I mean, seriously. Terrorism = bad. But panicking about this stuff -- or worse, inciting panic -- is unforgivable. Especially for POTUS." Wait. Terrorism is merely bad, but panicking is unforgivable? (Juxtapose this comment with the hysterical reaction to the United States' exit from the toothless Paris climate agreement.)

I'm not sure the president was "inciting panic," but let's concede that his tweets were foolish. No one is panicking now. No one has panicked in the past. By panic, liberals typically mean you've failed to discuss Islamic radicalism within the politically correct strictures they've prescribed. "That's exactly what the terrorists want!" goes the platitude. Don't get too mad. Don't be too blunt, or you might create new terrorists. And definitely don't overreact.

Shouldn't we, and the Brits, and everyone else, react to terror in the most appropriate way, rather than contemplating how jihadis want or don't want us to react? After all, this wouldn't be the first time we fought in a war others had decided to start.

Perhaps the only thing worse than overreacting is underreacting. It seems to me that one of the underlying reasons folks conflate terror and criminality is political. To admit that the Islamic world has a singular struggle with extremism, violence and illiberalism is an unwelcome intrusion into debates regarding immigration and multiculturalism, especially in Europe.

In the United States, it's a bit different: Let's not overreact because we also have an extremist problem. We also hate. We're also violent. Every time some deranged (genuine) lone wolf kills, the usual voices demand to know why we haven't treated the attack as we would an Islamic strike. Well, after the murderous Portland, Oregon, train attacker is subdued, there is no terror cell to dismantle, no funding to root out and no worldwide death cult to liberalize. It doesn't diminish the odiousness of the crime, but it necessitates a different response.

Needless to say, while it would be tragic if a Nobel laureate were accidentally run down by a lorry driver, girls who are blown up at an Ariana Grande concert -- or, for that matter, people who are forced to choose between jumping off a twin tower or burning in it -- are victims in a war that pits liberalism against despotism. No, it's not World War II, but it's dangerous enough. Treating its casualties as we would those who die in accidents will only normalize it.