David Harsanyi
|
Posted: Mar 17, 2017 12:01 AM
Share   Tweet
The opinions expressed by columnists are their own and do not necessarily represent the views of Townhall.com. 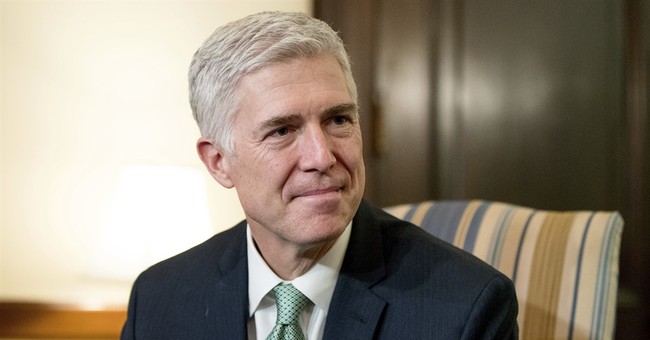 Trending
If Democrats want to filibuster President Donald Trump's Supreme Court nominee, they're entitled to do it. In fact, Democrats are free to try and stop federal appeals court Judge Neil Gorsuch's confirmation for any reason they desire, whether ideological or personal, or even no particular reason at all. There is nothing in the Constitution that compels senators to vote on judicial nominees the president forwards.

Make no mistake, though: Sen. Chuck Schumer now opposes a potential SCOTUS justice because he promises to be impartial when upholding the Constitution.

Since Gorsuch's confirmation hearing starts Monday in front of the Senate Judiciary Committee and opponents have found "little to latch onto," according to Politico (which means they've found nothing to spin into accusations of misogyny or racism), Schumer and his allies have launched a ham-fisted effort to paint Gorsuch as a corporate stooge.

This argument includes a preposterous New York Times piece headlined "Neil Gorsuch Has Web of Ties to Secretive Colorado Billionaire." Who is this mysterious tycoon? Philip Anschutz, who is probably one the most familiar names in Colorado. He's so secretive, in fact, that one of the largest medical facilities in the state is named after him. That's just one of the many buildings that bears his name. If it's disqualifying for one of the state's leading lawyers to have a relationship with one of its leading businessmen, then nearly every Coloradan in Washington, D.C., will have to pack up and head home -- including Schumer's colleague Sen. Michael Bennet.

Playing on this theme, Schumer trotted out a bunch of sad cases that supposedly illustrated the heartlessness at the core of Gorsuch's ideology. "Judge Gorsuch's decisions had negative real-life implications for working Americans," he tweeted. He also said, "When the chips are down, far too often he sides with the powerful few over everyday Americans just trying to get a fair shake."

By "chips," of course, Schumer means "law." As just one example, he tweeted, "Judge #Gorsuch ruled against Alphonse Maddin, from Michigan, a truck driver who was fired because he left his vehicle when freezing."

Well, guess what? The case was a bit more complicated than Gorsuch relishing an opportunity to punish working-class Americans. TransAm Trucking, Maddin's employer, fired him for insubordination because instead of waiting for help after his truck broke, he unhooked the trailer and drove to a gas station. Maddin seemed to act reasonably, and an administrative law judge ruled that his firing was illegal because federal law protects employees who refuse to operate a vehicle in unsafe conditions. Gorsuch reasoned that Maddin had been asked by TransAm not to leave his trailer but did anyway.

Let's remember: Normalizing the idea that the Constitution should be subservient to progressive conceptions of "justice" goes back to Barack Obama, who in 2008 promised to nominate justices who shared "one's deepest values, one's core concerns, one's broader perspectives on how the world works, and the depth and breadth of one's empathy." The left hailed this gibberish as proof of a thoughtful temperament, when in reality it's a feel-good argument to subvert the constitutional duties of the president and the court to feelings.

At the time, Tommy Vietor, a spokesperson for the Democratic Party candidate, confirmed, "Barack Obama has always believed that our courts should stand up for social and economic justice." Someone should ask Schumer whether it is ever acceptable for a judge to rule against a poor person and in favor of a large corporation? Or does social and economic "justice" take precedence over law?

It's debatable that Gorsuch's decisions hurt working people in the long run anyway. But the idea that Gorsuch is unsuited for the position because he won't reflexively rule in favor of those in lower socioeconomic positions -- and this is the entirety of the argument -- is an attack on the Constitution. Justices solemnly swear to "administer justice without respect to persons, and do equal right to the poor and to the rich." There is no addendum that says "unless they're really poor."

It's up to communities and government to show empathy. It's the job of judges to rule on law. Schumer is arguing that the impartiality of the courts should be ceded to the identity of the participants. That's un-American.