The Democrats' Fight Against School Choice Is Immoral

David Harsanyi
|
Posted: Jan 20, 2017 12:01 AM
Share   Tweet
The opinions expressed by columnists are their own and do not necessarily represent the views of Townhall.com. 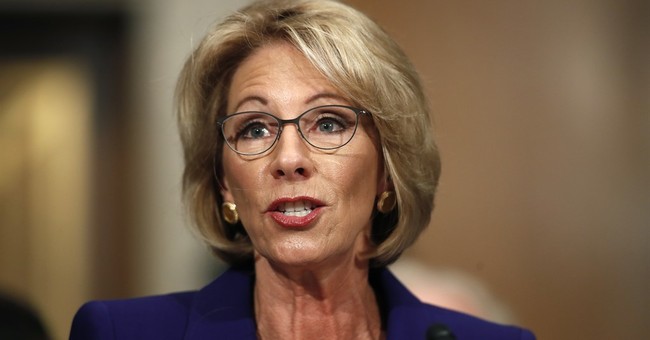 There's something perverse about an ideology that views the disposing of an unborn child in the third trimester of pregnancy as an indisputable right but the desire of parents to choose a school for their kids as zealotry. Watching President-elect Donald Trump's pick for education secretary, Betsy DeVos, answer an array of frivolous questions this week was just another reminder of how irrational liberalism has become.

Democrats often tell us that racism is one of the most pressing problems in America. And yet, few things have hurt African-Americans more over the past 40 years than inner-city public school systems. If President Obama is correct and educational attainment is the key to breaking out of a lower economic stratum, then no institution is driving inequality quite as effectively as public schools.

Actually, teachers unions are the only organizations in America that openly support segregated schools. In districts across the country -- even ones in cities with some form of limited movement for kids -- poor parents, typically those who are black or Hispanic, are forced to enroll their kids in underperforming schools when there are good ones nearby, sometimes just blocks away.

The National Education Association spent $23 million during the last election cycle alone to elect politicians to keep low-income Americans right where they are. Public service unions use tax dollars to fund politicians who then turn around and vote for more funding. The worse the schools perform, the more money they demand. In the real world, we call this racketeering.

Yet according to Randi Weingarten, president of the American Federation of Teachers, it is people like DeVos who are "a grave threat" to the public schools "that made America great."

Well, studies consistently show that minority groups in America's largest cities are lagging in proficiency in reading and math. Most of them attend schools that are at the bottom 5 percent of schools in their state. There is only so much an education secretary can accomplish, but the accusation of being a "grave threat" to this system is a magnificent endorsement.

With what are Democrats on the U.S. Senate Committee on Health, Education, Labor & Pensions most concerned? Preserving the status quo. Sen. Elizabeth Warren forced DeVos, who's a billionaire, to admit that she'd never filled out financial aid forms. The Daily Caller News Foundation found that 6 of the 10 Democrats on the committee have attended private or parochial schools, or have children and grandchildren who attend. So what?

Sen. Patty Murray, who has absolutely no understanding or regard for the constitutional limitation on the Department of Education, pushed DeVos to say whether she would personally defund public schools. Sen. Chris Murphy of Connecticut, a tireless adversary of the first five amendments of the Constitution (at least), asked DeVos whether she thinks firearms have any place in or around schools.

"I think that's best left to locales and states to decide," she replied, before offering a specific concern about a local rural district in Wyoming. Cue mocking left-wing punditry.

Mostly, though, the liberals on the committee attacked DeVos because she has a history of contributing her own money to help private and Christian schools expand their reach. She has also supported school-vouchers proponents and public charter schools that open doors to poor kids. Those dollars have likely done more to help minority students than all the committee members' efforts combined.

As many Americans surely know, rich and middle-class Americans already have school choice. In most places, the whiter the neighborhood, the better the school system; and the better the school system, the higher the prices of homes, making it impossible for those who aren't wealthy to escape substandard schools. (Rural schools also often suffer.) This is the status quo Warren, Murphy and Murray hope to preserve.

Yes, school reform is complicated, and challenges vary from place to place. Many reforms have shown improvement. But teachers unions and their allies opposed magnets, charters, home schooling, religious schooling and virtual schools long before data about the effectiveness of these choices was collected. And they do now, long after quality research has indicated the improvement of these options on the union-preferred system.

But by the parameters we often judge these sort of things, public schools are racist institutions, even if that's unintentional. They have an even more destructive effect on communities than all the dumb words and racist comments (real and imagined) that regularly make headlines. It's not surprising that poll after poll shows minority families support educational choice. Unfortunately, partisanship allows Democrats to take voters for granted and ignore the issue. For millions, this is a tragedy.