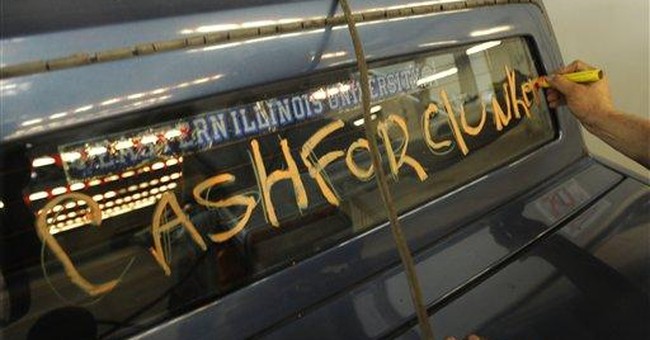 Here's an idea: Let's give $50,000 to anyone looking to upgrade to a brand-spanking-new, environmentally friendly home. All we ask in return is that you burn your previous residence into a heap of smoldering cinder.

That's the concept behind the bizarre "cash for clunkers" program so many people are deeming a success. It's so successful, in fact, that Congress will increase funding for it by 200 percent.

Then again, in Washington, a place where elected officials are astonished -- astonished! -- when a program doling out free cash is popular, success often translates into higher costs and fewer results.

Now, some of you radicals may have an ideological dilemma with a government handing out thousands of dollars to citizens making an average of $57,000 a year so they can upgrade their perfectly serviceable vehicles. Turns out, though, that by nearly any criterion, including the ones offered up by President Barack Obama, this populist experiment is an unmitigated fiasco.

To begin with, building a new car consumes energy. It is estimated that 6.7 tons of carbon are emitted in the process. So a driver who participates in the "cash for clunkers" program would need to make up for that wickedness. There are about 250 million registered vehicles in the United States. Only a micro-slither of those cars will be traded in -- and a slither of that number could be deemed "clunkers" outside the Beltway.

A survey of car dealerships found a relatively small differential in fuel efficiency between cars traded in and those replacing them. A Reuters analysis concluded -- even with the extended program in place -- "cash for clunkers" would trim U.S. oil consumption by only a quarter of 1 percent.

As an economic stimulus, the plan is equally impotent. As James Pethokoukis, a columnist at Reuters, succinctly explained, "The program gets much of its juice via stealing car sales from the near future rather than generating additional demand."

The point of a stimulus should be to create new demand, not to move existing demand around to score political points. Then again, for this administration, economic recovery always takes a back seat to moral recovery.

If the nation weren't in the midst of a six-month agenda of national redistribution, this kind of blatantly inefficient program -- even if it were ostensibly about the environment -- would be allotted a measure of substantive debate in Congress. No such luck. We need to pass something quickly -- quickly, always quickly. And that kind of pressure typically manifests in some creative accounting.

This week, Secretary of Transportation Ray LaHood claimed that "cash for clunkers" had benefited domestic car companies, particularly Ford. When The Associated Press requested data to verify this contention, the most transparent administration ever to grace God's soon-to-be-unblemished Earth refused to release the data.

The AP reported that "the limited information released so far shows most buyers are not picking Ford, Chrysler or General Motors vehicles, and six of the top 10 vehicles purchased are Honda, Toyota and Hyundai."

But unless your idea of success is transferring wealth from one citizen to another for no tangible economic or environmental benefit, "cash for clunkers," like much of what passes as stimulus these days, is a major dud.