Now You Own It, Mr. President 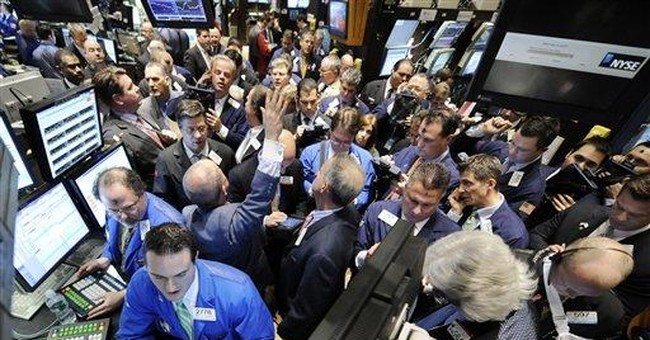 There are few things more satisfying than unloading your righteous rage on one of those insatiably greedy Wall Street bankers.

We have Gordon Gekko to blame. Barack Obama has George W. Bush. So while the president is busy radically centralizing the nation's economy, he, in a superbly eloquent and inspirational pitch, always reminds us that nothing is his fault.

If Washington had a buck to spare, it still wouldn't stop at the top. But let's, for the sake of argument, concede that presidents trigger recessions. Well, then, we also must concede that nearly every initiative enacted in the first 50 days by the Obama administration has exacerbated what Bush started.

Isn't it too early to judge? It would be if Obama had not accelerated the timeline with his "ambitious" agenda, including the partisan trillion-dollar project masquerading as a stimulus bill and the deficit-busting budget. It would be if Obama had not worked early to support agenda-driven omnibus pork bills, job-killing cap and trade schemes, and union assaults on workers' rights, to name just a few of his priorities.

Obama can do anything, apparently, except properly staff the Treasury Department. Aren't those guys supposed to be "fixing" the economy or something?

Then again, it also should be noted that if Treasury Secretary Timothy Geithner, whose gibberish-infused explanation of the administration's bank bailout non-plan knocked the Dow Jones down 4 percent in one day, is indicative of "staff," maybe Obama is doing us all a favor.

The Dow Jones industrial average, actually, has reacted to Obama by plunging nearly 20 percent since he became president. That's an obliteration of wealth that no stimulus bill will recoup. Since Election Day, the market has lost nearly 30 percent of its value -- trillions of dollars, not from CEO bonuses, as you may have hoped, but from your 401(k) and the private sector.

"The stock market is sort of like a tracking poll in politics. It bobs up and down day to day, and if you spend all your time worrying about that, then you're probably going to get the long-term strategy wrong," Obama recently explained.

You know, Mr. President, not everything is like politics.

The market is a forward-looking entity, indeed, but it is driven by the decentralized actions of millions of investors every second. It's the opposite of politics. And this setup surely offends the sensibilities of the statist planners occupying Washington. Unlike politicians, markets don't lie. And this market has been in freefall for a year.

So, what to do? Obama, who promised not to raise taxes during a recession, now plans to raise nearly $1 trillion in new taxes directly from the investor class. He plans to raise capital gains taxes (a disincentive to investment), corporate taxes (for you, the consumer, ultimately to pay) and on the "rich" (which the nonpartisan Tax Foundation estimates will affect 1.3 million small-business owners).

This recession already has passed the 15-month threshold, the historical average for downturns. Most presidents helped ease us out of those tough spots by easing the burden on Americans. Obama has engaged in the opposite. That's his gamble.

And most polls show the president's approval rating at about 60 percent, which is similar to other modern presidents' ratings at this point in their presidencies. But now that Obama has used his political capital to further ideology rather than economic growth, one thing is clear: He owns this mess.