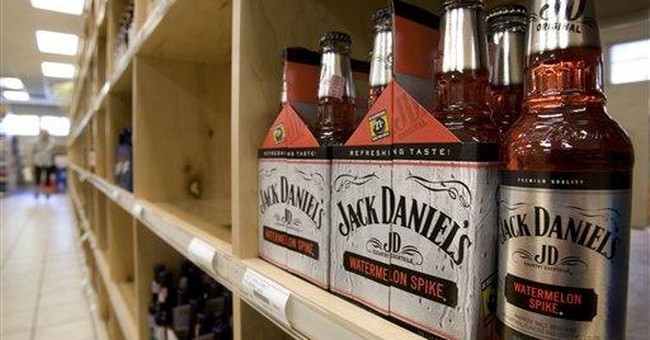 What is a rational American to do during tumultuous economic times? Well, typically, you get sloshed.

The Mayo Clinic tells us, "High levels of stress, anxiety or emotional pain can lead some people to drink alcohol to block out the turmoil." So predictably, the sales of spirits, beer and wine have risen as the Dow Jones has tanked.

Drinking can be fun. But other behavioral trends set off by recession have been downright unsightly. For one, we have witnessed a legion of once-enlightened Americans turning to a host of deviant activities.

Instead of buying tree seedlings and eco-friendly hair gel, increasingly Americans are reaching for lowbrow beers, purchasing firearms, eating obnoxiously unwholesome burgers for a dollar a pop, and even shopping at Wal-Mart for junky Chinese-made toys that have a 32 percent chance of killing their overachieving offspring.

All in all, it's a social engineer's nightmare.

One of the outstanding side effects of imbibing is an incremental loss of judgment. So it's no great surprise that the aggressively absurd grousing about our crass "consumer culture" continues unabated. How, one wonders, do these folks think the disposable income to buy an odorless compost kit is generated -- a government stimulus package?

Without a vibrant free market, there is no pretend Utopia. There are no Pier 1 Imports in Pyongyang. And as the only recession-proof industries are typically 80 proof, you might say, the Greens need the Greedy.

When gas prices plunge and money is scarce, there is no run on hybrids -- or any new cars, for that matter. Instead, Americans cling to their inefficient clunkers and continue to pollute the air. The sale of hybrid cars in the U.S. fell nearly 50 percent in November -- outpacing the fall of other cars. (So naturally, employing its business savvy, Congress is demanding that Detroit make more.)

When the economy is humming, living responsibly can mean living sustainably. Today it means darkening the massive doorway of a Wal-Mart. A survey of 1,000 consumers conducted last week by America's Research Group shows a massive number of Americans expect to do holiday shopping at a Wal-Mart.

Those heartless corporate mongers. They buy in bulk. They offer cheap products to poor people. They refuse to allow unions to destroy a sound business model. Well, they can't be stopped in bad times. Wal-Mart sales have spiked.

During turbulent times, we also have learned that consumers are less apt to overpay for organic turnips. They start hitting McDonald's. The chain is (comparatively) booming; sales at stores that have been open for at least one year climbed almost 8 percent in November. With a national effort to demonize fast-food restaurants as the cause of obesity, you can imagine this will not sit well with some folks.

America: drunk, fat, armed and, worst of all, environmentally unsound.

Also greedy. The massive prosperity that the far left calls materialism allows the rich folk to fund charities and cultural institutions. Through their taxes, we indulge in all things progressives love. Now nearly everything the enlightened have been lecturing us about for the past 10 years is being undone by recession.

When we have our next economic boom -- and we will -- are the do-gooders going to assail consumer excess or just be thankful? I mean imagine Wall Street bankers, CEOs, oil barons, organic gardeners and Smart car enthusiasts all living together in prosperity.