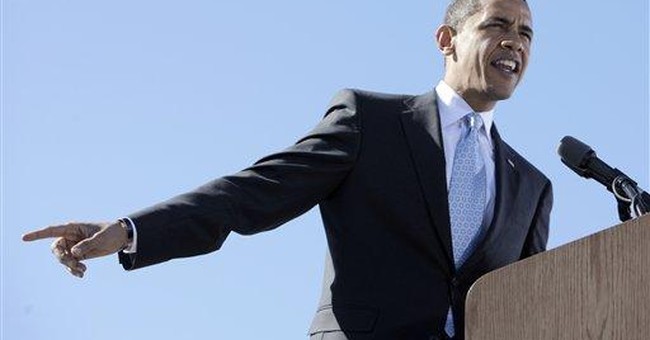 Barack Obama is going to fix the economy by "spreading the wealth around"?

Now, I'm not attempting to demonize Obama, God forbid. It's just that, as we all know, that's what Obama told Joe the Plumber.

Obama laughs off the charge of socialist behavior -- and to be fair, socialism isn't the precise term to affix to his ideas. It's more like Robin Hood economics. On a recent campaign stop, Obama joked that by the end of the week, McCain would be accusing him "of being a secret communist because I shared my toys in kindergarten."

Now, I'm not suggesting Obama intends to transform this nation into 1950s-era Soviet tyranny or that he will possess the power to do so. I'm suggesting Obama is praising and mainstreaming an economic philosophy that has failed to produce a scintilla of fairness or prosperity anywhere on earth. Ever.

If you believe that "fairness" -- a childishly subjective idea that ought to be quarantined to playgrounds and Berkeley City Council meetings -- should be meted out by the autocrats inhabiting Washington, D.C., your faith will be duly rewarded.

You know, once upon a time, the stated purpose of taxation was to fund public needs -- such as schools and roads -- assist those who could not help themselves, defend our security and freedom, and yes, occasionally offer bailouts to sleazy fat cats.

Obama is the first major presidential candidate in memory to assert that taxation's principal purpose should be redistribution.

The proposition that government should take one group's lawfully earned profits and hand them to another group -- not a collection of destitute or impaired Americans, mind you, but a still-vibrant middle class -- is the foundational premise of Obama's fiscal policy.

It was Joe Biden who said (not long ago, when he still was permitted to speak in public), "We want to take money and put it back in the pocket of middle-class people." The only entity that "takes" money from the middle class -- or any class for that matter -- is the Internal Revenue Service. Other than that, there is nothing to give back.

And who knew we needed such a drastic renovation of an economic philosophy we've adhered to these past 25 years (yes, counting Bill Clinton's comparatively fiscally conservative record)? Despite a recent downturn and with all the serious tribulations we face, Americans have just lived through perhaps the most prosperous and peaceful era human beings ever have enjoyed.

From 1982 until now, every arrow on nearly every economic growth chart -- every health care chart, every chart that matters -- points in one general direction, and that's up.

Obama, who, it seems, is running not only for president but also for national baby sitter/accountant/daddy/icon, ignores this success and claims he can "invest" (will that euphemism ever go away?) and disperse your money more efficiently, smartly and fairly than you can. How could any American accept the absurdity of that position?

Then again, it is doubtful that Obama is on his way to the presidency because of any revolutionary idea. It's about performance. And by performance, I mean the performance of President George Bush.

Bush's failure, however, should not be counted as a failure of markets or capitalism. And even if it were, history shows us that the failures of capitalism are a lot more fun than the absence of capitalism.

But when a candidate explicitly endorses a collectivist policy well, words still have meaning, don't they?