The History of Government Evil in a Collapsing Venezuela

David Grantham
|
Posted: Aug 07, 2017 9:28 AM
Share   Tweet
The opinions expressed by columnists are their own and do not necessarily represent the views of Townhall.com. 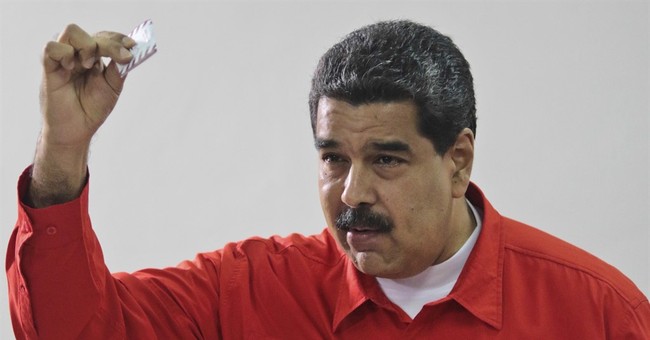 The old adage that absolute power corrupts absolutely should not be understood as an isolated consequence of one man’s power. This truth is also associated with man’s quest for “savior” governments and “benevolent” bureaucracies. Both are nothing more than perpetually expanding states that pocket people’s liberty and justice along the way. And the most heinous examples in history are reappearing in Venezuela.

Nicholás Maduro failed to dissolve the Congress after voters unseated many of his supporters. He then unsuccessfully tried to use a sympathetic Supreme Court to do the same. Now the administration orchestrated a sham election to replace the uncooperative and rightly elected body with a constitutional assembly comprised of pro-Maduro delegates and answerable only to the regime.

But it’s the last few days that are reminiscent of yesterday’s evil.

The new 545-member body of Maduro loyalists cheered in unison the removal of the country’s chief prosecutor, Luisa Ortega Diaz. They lashed out at the courageous dissenter, chanting “traitor” and demanded she face justice for her unspecified “crimes.” The Maduro mobsters then handed the position over to a criminal kingpin already under sanctions by the U.S. government. The Supreme Court went on to disqualify Diaz from office indefinitely and prohibited her from leaving the country.

The assembly also called the opposition “fascists” and promised they would be held responsible for refusing to concede to their power grab. The following day, government forces crushed a small military rebellion two hours outside the capital. Defense Minister Padrino Lopez called it a “terrorist attack.” Maduro said they had to “defeat terrorism with bullets.”

But it’s not just words. The Maduro regime has also gone out of its way to achieve this despotism through faux democratic processes. They know that usurping an existing organization creates a bureaucracy of a thousand dictators, all with a shared interest in protecting and perpetuating the system. And they also know that appearance of democratic institutions can stave off intervention and isolation. The corrupted system becomes endemic.

On the other hand, king-making tends to invite outside interference, severe isolation and sets a complicated precedent for those in power. While it can bring immediate gratification, it also becomes epidemic, or intense and short-lived.

Savior governments know that entrenched and bureaucratic evil is sustainable against outside pressure and capable of lasting cruelty.

The course of events in Venezuela looks awfully like how Turkish authorities used the state apparatus to round up Armenians for death during World War I. The situation is reminiscent of Saddam Hussein’s infamous public purge in 1979. It mirrors the military junta in Argentina who disappeared thousands of political opponents they deemed to be “terrorists” during the Dirty War of the 1970s and 1980s.

The Trump administration must decide now the extent of support the U.S. government will provide Maduro’s opponents. Vice President Pence has spoken directly to political prisoner Leopoldo Lopez and the U.S. Treasury continues to level sanctions against the regime. But the administration must make clear how far the U.S. will or will not go in backing the opposition.

Venezuela could easily become the world’s cockpit. A definitive resolution is needed. Reluctant escalation cannot be an option.