David Grantham
|
Posted: Mar 18, 2016 10:42 AM
Share   Tweet
The opinions expressed by columnists are their own and do not necessarily represent the views of Townhall.com. 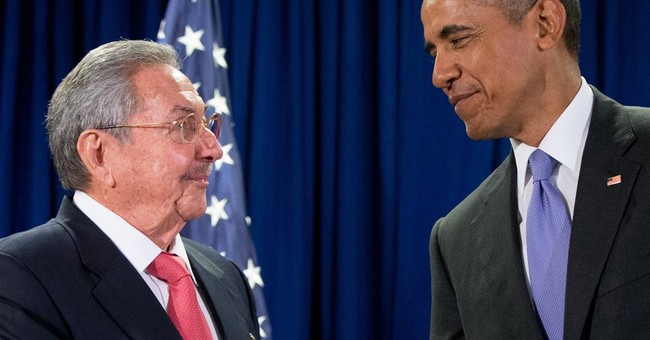 I am fond of saying the president seems to work harder for our adversaries than the country that elected him. But his myopic focus on appeasing the Cuban government has reached a level that defies logic. He appears more eager than ever to give the Castro regime that which it asks for, while expecting little in return. This mystifying level of generosity comes at great expense to U.S. national security. But President Obama’s latest plans to visit Cuba with private business leaders shows how the president, to borrow from William Gladstone, completely “misunderstands the office he occupies.”

We know he remains insistent on closing Guantanamo Bay. A recruiting tool for terrorists, he still claims. However, terrorist organizations continue to plot, maim and kill with little or no interest in Gitmo's continued existence.

He then submitted a plan for closing the facility to the same Congress that already essentially outlawed that very action. This, presumably to win favor with the Castro regime since the plan literally had no practical impact, other than spending taxpayer money to draft it.

But even that failed to change things. Report after report shows how human rights violations have only worsened since the United States resumed relations with Cuba. Secretary of State Kerry even cancelled his visit over the issue. If that was not enough, the Cuban government issued a sternly worded editorial in a local paper that essentially told the president that the communist government had “no intention of changing its policies in exchange for normal relations with the United States."

Damn the torpedoes, full speed ahead, the president thunders.

His determination to accommodate the Cuban government without any legitimate sense of why, how or for what, convinced a wary Congress to confirm with Loretta Lynch, yet again, that closing Guantanamo Bay would be a violation of the law. She emphatically agreed.

The Chairman of the House Armed Services Committee felt so unsettled with this pattern of behavior that he actually drafted letters to the Secretary of Defense and Secretary of State concerned that the president may be holding "secret negotiations" with Cuba.

Let that sink in. Arguably the most important national security official in Congress believes the Commander-in-Chief might be planning to subvert the law and circumvent Congress in order to achieve something that can only be detrimental to U.S. national security.

Now CEOs from Xerox and Marriott, among others, will accompany the president on his trip to the communist nation in a few days. He is essentially facilitating private business engagement in Cuba. An Alabama-based tractor company already won approval to build a factory near the capital. The Cuban government is the only group that can afford those tractors, though. Amnesty International should probably keep an eye out for large swaths of freshly disturbed earth, since harsher treatment of dissents suggests that they will begin disappearing.

This economic outreach might not be so bad if the president was not doing the opposite stateside.

While encouraging free enterprise in closed countries, the ‘administration of regulation’ cripples economic opportunity at home. The government refuses to lift its boot off the neck of a private sector struggling to breathe.

Dodd-Frank has decimated the small banking industry; only three new banks have opened since 2010. Small town America depends on these community banks for economic growth. Less of them equates to fewer jobs. Obamacare threatens the livelihood of small-to-medium size companies. Those businesses also face insurmountable compliance costs from an ever-expanding government bureaucracy. Aside from your expertly intrusive EPA and Labor Department, job creators contend with an Occupational Safety and Health Administration, a Federal Motor Carrier Safety Administration, and an Employee Benefits Security Administration, just to name a few.

These developments should concern everyone since this sector of the economy is responsible for two-thirds of the country’s job growth.

It’s like watching the president’s own Iditarod race, where he has worked four of his last six dogs to death by replacing his sled with a London double-decker bus. “Mush! Mush!” he commands of his two remaining pups.

This is not a simple case of national security problems meets domestic economic problems. Free enterprise is our national security. Undermining one, undermines them both. Cuba is the illustration.

The president recently admitted to have, at times, “not been attentive enough to feelings and emotions and politics in communicating what we’re doing and how we’re doing it.” In other words, I’m sorry for not considering the fact that you cannot comprehend the depths of my remarkable strategy. His logic is a closed loop of spectacularly failed ideas. He is an island unto himself. Perhaps that’s his attraction to Cuba.