America Will Not Be Defeated 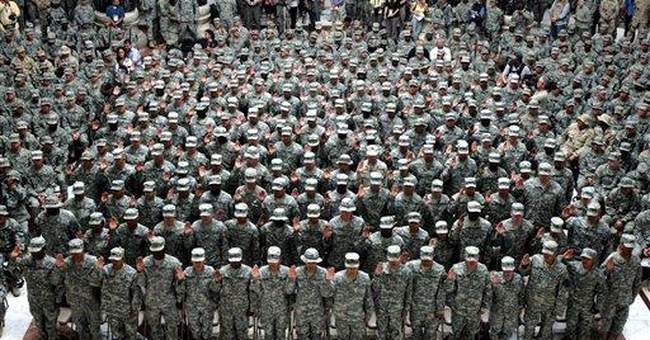 Starting out in the infantry, as with any profession or vocation, you learn basic skills. Every infantryman learns the same standardized plays—called “battle drills”—which are trained and retrained relentlessly. There are nine such drills in the infantry handbook, but battle drill number three always confused me: breaking contact. Essentially breaking contact is when you quit. You run away because the enemy fire is unrelenting and there is no hope to survive. The only way out is to retreat, or leave the terrain as quickly as possible—breaking contact. As it is with all infantry tactics, you can’t just run away when being shot at. Infantrymen shoot their way out of most situations, good or bad.

I must have rehearsed the break contact drill thousands of times during my six years in the infantry. Sometimes we practiced the standard base-of-fire leapfrog and sometimes I taught the famous Australian Peel. These are just fancy ways of getting off the battlefield as quickly as possible with the least amount of causalities. We would constantly go over the fundamentals of retreating from battle, almost as much as we trained for knocking out a bunker or the other rudiments of close quarter’s battle.

Those long days in the field practicing retreat were probably the only wasted training I received in my beloved Army. There must have been at least 10 times in battle during my time in Iraq when, according to doctrine, we should have broken contact; but we all knew the deal. We used every other battle drill during our time at war almost on a weekly basis. Taking out bunkers, clearing enemy held buildings and even navigating a couple mine fields, but never breaking contact. From the lowest ranking private to the commander of the battalion we understood the unspoken oath:

This just doesn’t happen. We fight to win. And hold our ground. No matter the odds or consequences. Those are the lessons taught to us by our brave predecessors of Vietnam, Korea and World Wars I and II.

For as long as I have been associated with the military and veteran organizations I have always been proud of the company I’ve kept. As easy as it is to say “never quit” you learn to appreciate those near you who actually live their lives by this warrior ethos. And you are deliberately and forever changed by those near you who die by that same warrior ethos.

I helped found the largest group of non-partisan servicemen and women who serve our great nation at a time of war. Vets for Freedom (Vetsforfreedom.org) is a group of my peers that continually make me proud of my veteran status. No other Long War veteran’s group from my generation holds more valor awards from the field of battle or purple hearts as Vets for Freedom. What we stand for is always in concert with what we fight for.

As the lone ambassadors of America’s Warrior Class we feel strongly that, as long as there is a debate taking place on the merits of the conflicts in which we continue to fight and bleed, we will not only participate, we will lead that debate. No one is more qualified or more deserving of that distinction than those brave souls who have continued to re-enlist, tour after tour, to defend our freedoms.

This is the main reason why VetsforFreedom.org has created the nation-wide Heroes Tour. A bus full of notable, decorated veterans will travel from city to city and tell our stories and thank each city’s local heroes fresh from battle.

New York Times bestseller and American patriot Marcus Luttrell, who received the Navy Cross and fought the epic fight in the mountains of Afghanistan that would pit his Navy SEALS against 150 Taliban guerrillas, is on board.

Steve Russell, the Bronze Star with valor holder and Task Force Commander responsible for finding the spider hole holding Saddam Hussein will be there. Jeremiah Workman, a Marine awarded the Navy Cross for the 24 insurgents he helped destroy in house fighting in Fallujah will be there too. The list continues on and on—all warriors who are committed to victory and the destruction of the Islamist extremism that threatens us at home.

We continue to defend our sacrifices almost five years to the day since we were sent to war in Iraq. Our brothers and sisters in the Afghanistan conflict are approaching year seven. Still we have partisans and defeatists climbing over themselves to define what it is we fight against and why it is important to leave before victory is achieved.

By railing against the surge, by cheapening the success on the ground today in Iraq, these shameful Moveon.org-controlled senators and representatives have bet against our Warrior Class in America. As members of that fraternity, my peers and I again are pushing back against this infectious defeatism.

In the name of partisan election cycle politics, television commercials and campaign talking points are now openly designed to sap the will of the American people. This is an effort to take from veterans the honorable and attainable victory our beloved friends gave their lives in exchange. Like the Islamist threat overseas, this dogma will be met head on. We cannot allow the selfish advancement of political agendas to transcend the blood sacrifices made in Afghanistan and Iraq.

Bet on this… we will not be defeated.