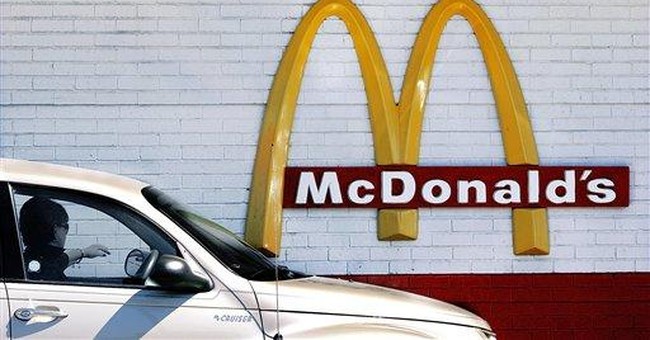 Have you noticed that the media largely fail to connect the dots between related events?

In all the reporting on the auto industry’s ills, little is said about the government as the chief cause. Politicians holler at auto executives in hearings and beat their chests in interviews, but never mention Corporate Average Fuel Economy (CAFE) mileage standards. Just like unaffordable union contracts (mentioned incredibly often by the same politicians who now wish to give the unions expanded), unchecked power wreaks the same destruction in other industries via the Employee Free Choice Act (which steals away free choice).

In all their reporting of how the sub-prime mortgage meltdown purportedly triggered the financial industry collapse (as a child’s sneeze might topple a meticulously constructed, floor to ceiling house of cards), they uttered hardly a word about Barney Frank and Gang’s push for financial institutions to provide mortgages to the woefully unqualified. Nobody mentioned the the Clinton Administration’s push for home ownership as a God-given right to be facilitated at any cost, let alone the years of criminal conspiracy and obscene executive compensation at Fannie and Freddie.

The next big mess in the making, where the dots are not being connected, is the attack on the fast food industry, intended to cripple its growth, slash its size and is certain to eliminate millions of entry level jobs for which there are no horizontal equivalents.

On Nov. 20, MSNBC reported on a new scientific study, stating that a ban on fast food restaurants’ TV advertising could reduce obesity in pre-teen children by 18 percent.

Unless we have an unreported epidemic of 12-year-old car thieves driving themselves to McDonalds, I have different statistical voodoo. Mine suggests that responsible parenting could reduce childhood obesity by 100 percent. But that’s not my point.

This is another in a series of political and media attacks on this industry, laying the groundwork for successful class action lawsuits by state governments and consumers. It’s an exact replication of the assault on the tobacco industry, which made so many lobbyists and lawyers rich, got so many politicians so much time in the spotlight, and accomplished absolutely nothing with regard to public health.

Opening new fast food restaurants has even been outlawed in parts of Los Angeles on the grounds that they contribute to childhood obesity. (Outlawing sitting for endless hours on an ever widening posterior while playing video games and eating mountains of junk food supplied by parents is not considered politically attractive.)

These are neither accidental nor unrelated incidents. To think so is hopelessly naïve. If you go back and carefully examine the build-up to the full-fledged war on tobacco, you will see the parallels, step by step. It is deja vu, all over again.

This train is now just leaving the station, coal being shoveled into its furnace, steam and power building. It will gain speed and strength, cross the point of no return, and slam into this giant industry unless de-railed early. The destruction: skyrocketing prices at the surviving chains (a tax on the poor and middle class), the shuttering of thousands if not tens of thousands of outlets, the loss of millions of jobs in the food industry, an epic loss of property and sales tax revenues to communities, the loss of ad revenues to media (which in turn provide tax revenue and jobs), and untold damage to franchising – a major force in guiding people, including veterans and minorities, into business for themselves. Of course, zero real impact on public health.

The impending wreck is another of too many examples of government not just picking but creating winners and losers in business. And it is part of an even bigger tabletop of puzzle pieces the media views and reports as separate and unrelated when, in reality, they are all strategically connected to expansion of government control of business.

Maybe it will bring the fast food industry to the federal table for its multi-billion dollar bailout before it is all over. Super-size my bailout, please.