Daniel Savickas
|
Posted: Jan 21, 2021 11:23 AM
Share   Tweet
The opinions expressed by columnists are their own and do not necessarily represent the views of Townhall.com. 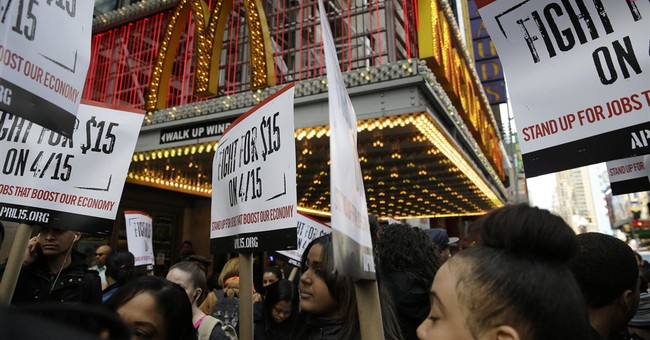 If there’s any lesson to be learned from American history, it’s that politicians will use times of crisis to implement sweeping policy changes. Sadly, these sweeping reforms are often pretexts to increase government power and end up harming the economy and the nation. President Woodrow Wilson used World War I as a pretext to implement unprecedented government controls on our economy. In the midst of the Great Depression, President Roosevelt ushered in the New Deal, fundamentally shifting the scope of the federal government to this very day.

The coronavirus pandemic has, unfortunately, not been any different. Spending has risen to levels never before seen in our nation’s history. Universal basic income, a concept that had previously been laughed out of any political conversation, has now become the norm, with direct checks being distributed indiscriminately to American citizens. The latest proposal, a federal $15/hour minimum wage, would be devastating to small businesses and the economy.

For perspective, the current federal minimum wage is $7.25/hour, with states and cities implementing their own increases. The proposal by President Biden and congressional Democrats would more than double the current rate. Businesses are already languishing under the weight of the lockdowns. Now, many of those who are struggling will have to more than double their spending on personnel.  This is the opposite of reform and recovery. This will actively harm small businesses across the country and ensure those who survived the lockdowns do not come back.

The federal government is going to bury our nation deeper in debt, explode deficits further all in the name of helping businesses and workers recover, while simultaneously implementing policies that put businesses in a tight financial bind and force them to lay off workers. Only in Washington could any of that make sense.

This is not mindless fear-mongering either. According to estimates from the Congressional Budget Office (CBO), the minimum wage hike to $15/hour would cost the nation 3.7 million jobs. Fortunately, there is at least one voice of reason in DC.  When Sen. Tim Scott (R-S.C.) heard about the proposal he noted that, “Forcing a $15 minimum wage into a coronavirus relief bill would do nothing but shutter the millions of small businesses already on life support and would force those that survive to lay off employees.”

This highlights a fundamental difference of focus. Proponents of the plan point to the massive revenue numbers of companies such as Amazon, Wal-Mart, McDonald’s, and many others as proof that businesses can afford this shift in federal wage standards. However, critics rightly point out that it is not only these companies that will be forced to comply. In fact, it is quite possible that mega businesses will be the only businesses that can afford to go forward paying every worker at least $15/hour.

It is not just businesses that rely on minimum wage employees and those employees themselves who will be adversely harmed by this minimum wage increase. Those businesses that do survive this foolish reform will be forced to raise the prices of their goods and services, perhaps significantly so.  That means every family that depends on these goods and services will feel quite the pinch when they look at their budgets at the end of the month.

Some of the worst policies to come out of Washington are surrounded by good intentions. While the desire to help struggling workers is a noble one, if it were truly as simple as snapping our collective fingers and mandating they be paid more, many of the government jobs here would be rendered obsolete. Policymakers are elected to make difficult decisions and have tough conversations, weighing pros and cons. Raising the minimum wage to $15/hour in the midst of a global pandemic is an idea that only makes sense if you don’t dedicate much thought to it.

Americans need to collectively demand better from our elected leaders and demand they reject this proposal that stands to harm the economic well-being of millions.

Daniel Savickas is a policy analyst for the Taxpayers Protection Alliance.