Daniel Pipes
|
Posted: Feb 18, 2016 12:56 PM
Share   Tweet
The opinions expressed by columnists are their own and do not necessarily represent the views of Townhall.com. 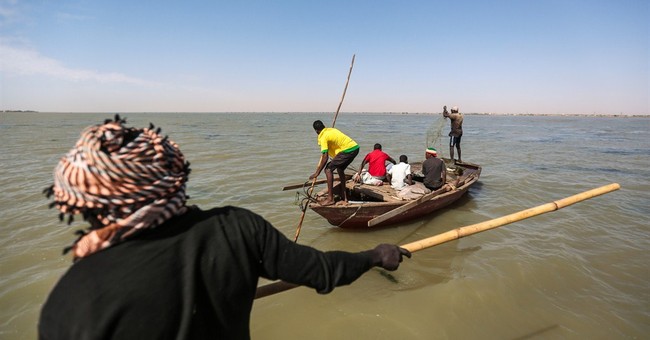 Oil is the Middle East's glamor product, sought after by the entire world and bringing the region wealth beyond the dream of avarice. But water is the mundane resource that matters even more to locals for, without it, they face the horrible choice of leaving their homes or perishing within them.

That choice may sound hyperbolic, but the threat is real. Egypt stands out as having the largest population at risk and being the country, other than Iraq and Yemen, with the most existential hydrologic problem.

As every schoolchild learns, Egypt is the gift of the Nile and the Nile is by far the globe's longest river. Less well known is that most of the Nile's volume, 90 percent, comes from the highlands of Ethiopia and that the river passes through 11 countries. For uncounted eons, its water flowed to Egypt in uncounted quantities.

In 1929, the British government, representing Egypt, signed an agreement with the independent government of Ethiopia guaranteeing an annual flow of 55.5 billion cubic meters (bcm) of water to Egypt. Counting a minimum of 1,000 cubic meters per capita per annum (the average worldwide is 7,230 cubic meters), that amount more than sufficed for the 15 million Egyptians of the day.

The succeeding 87 years saw Egypt's population increase six times until today it numbers 90 million. Adding to the river's 55.5 bcm, Egypt gets about 5 bcm from non-renewable underground sources and 1.3 bcm from rain, leaving it with about 62 bcm a year, or one-third less than the country's minimal needs. In addition, Egyptians recycle about 10 bcm of agricultural runoff water, whose highly polluted nature (fertilizer and insecticide residues) eventually kill the land by salinizing it. Exacerbating this shortage, Egypt's high temperatures leads to higher rates of evapotranspiration, requiring more water for agriculture than in places with cooler climates.

This water shortfall translates into a need to import food and, at present, Egypt must borrow funds to import an alarming 32 percent of its sugar needs, 60 percent of yellow feed corn, 70 percent of wheat, 70 percent of beans, 97 percent of food oil, and 100 percent of lentils. The need to import will get worse with time; estimating Egypt's population at 135 million in 2050, it will need 135 bcm annually and, based on present assumptions, the water deficit will more than double to 75 bcm.

Making matters worse, Ethiopians recently woke up to the fact that vast quantities of water leave their territories without any benefit to themselves. Accordingly, they initiated a network of dams, culminating with the pompously named Grand Ethiopian Renaissance Dam (GERD).

As presently planned, the lake behind this dam would hold 74.5 bcm, plus 5 bcm would be lost through seepage and 5 bcm lost to evaporation. Four auxiliary upstream dams to reduce silting will retain another 200 bcm. Noting that 86 percent of Egypt's water originates in Ethiopia, Egyptian specialists not unreasonably conclude that the allotted 55.5 bcm would not be forthcoming. Nader Noureddin, professor of soil and water sciences at Cairo University, sees the dams placing "the lives of 90 million Egyptians at risk." (Most statistics in this analysis derive from Noureddin's work.)

Ethiopians reply: Not to worry, all will be fine, the guaranteed allotment and more will reach Egypt. When Cairo protests nonetheless, Addis Ababa agrees to one study after another, even as it furiously builds the GERD, which is scheduled to begin operations in 2016, storing an initial 14 bcm.

The potential for disruption is enormous; in 2013, during the Mohamed Morsi era, Egyptian politicians inadvertently bruited in public their military plans about special forces, jet fighters, and rebel groups to deal with the GERD (shades of the opera Aïda). Morsi now sits in jail but such ideas offer insight into Egyptian desperation.

At base, the Nile River confrontation lies in variant understandings of water possession. Downstream states like Egypt point to the immemorial nature of rivers flowing across borders. Upstream states like Ethiopia point to the water belonging to them in the same way that oil belongs to the Arabs. There is no right or wrong here; resolution requires creative compromise (for example, by lowering the height of GERD saddle dams), allowing the Ethiopians to benefit from their waters without Egyptians facing cataclysm.